In praise of interPLAY 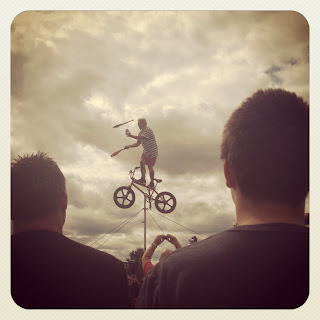 One would think that it would be easier to write about that which you know a lot, compared to that which you know a little.  It's not though.  When it comes to interPLAY, there are few things I know more intimately, having served as president of the organization that produced the annual event for 15 years.  So, as I sit here contemplating what to say and how to say it, the words don't flow as easily as they might otherwise. 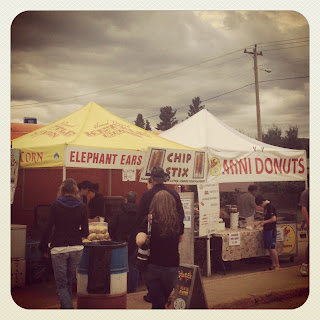 Festival stalwarts noticed that the 2012 version of interPLAY was different.  It is a transition year as Events Wood Buffalo's core staff are all new since last year's festival, which some described as "one of the best". They were reserved in their observations but expressive in their passion for Fort McMurray's signature summer festival. 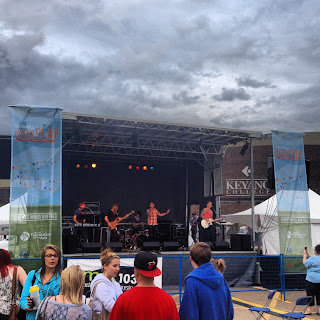 I've started a list of things that I observed, small adjustments that could be considered in future years by organizers, observations borne out of a decade and a half of trial and error - good ideas gone bad, and wacky ideas gone good. We didn't follow any playbook, we didn't copy any formula, we just put up a bunch of tents, hired artists, programmed activities, encouraged participation by locals, did the best job we could and talked about what we could do better the next year, over and over again.

Many of the minds and hearts who built interPLAY have gone on to other things and other communities, but several remain invested and interested.  Some still come out and volunteer, others are on the event staff, and a few, like myself, are happy patrons and participants. 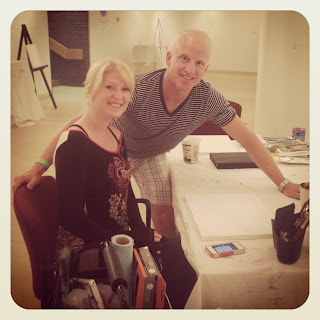 I was thrilled to join in the Amazing Art Race this year.  I spent three hours at a table with Angie Murrin doing my best to paint a picture that I felt illustrated what "big spirit" meant to me, the theme for this year's race. 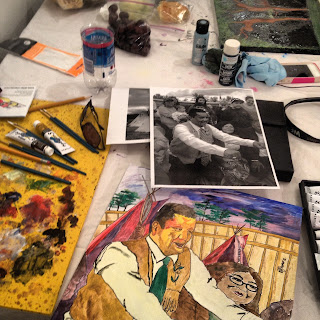 The result sucked - a feeble attempt to paint Chief Vern Janvier playing hand games at the ATC Regional Gathering - but this was really about the journey not the destination.  It was such a pleasure to participate in something that I had a small hand in starting all those years ago.

Alan Roberts, one of the original founders of interPLAY (started in 1990), will tell you that the roots of this festival are grounded in theatre.  And while this year's iteration sadly had only one locally-flavoured production, the shows and performances I have seen by artists who have traveled here from across western Canada have been amazing. 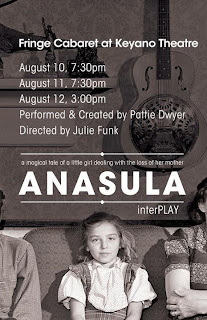 Pattie Dwyer, who I had the pleasure of being killed by on stage in a production of Wait Until Dark in 2004, wrote and performed in Anasula, directed by the wonderful Julie Funk.  I wrote a truncated review on the play's Facebook page: "It was a magical theatrical experience, from the initial engagement with the audience right through to the last word. Heartfelt, incredibly moving, a definite tour-de-force performance by one talented performer, and in this case, writer too. Thank you Pattie Dwyer for an unforgettable show." Your final chance to see this super-talented artist is at 3 pm. 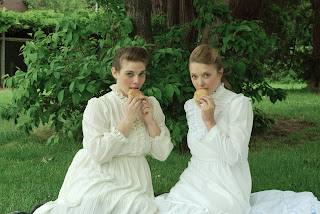 I got dragged on stage by Emmelia Gordon and Pippa Mackie during their hysterical performance of The Progressive Polygamists.  I was hoping against all hope that it wouldn't be me, but with so few audience members to choose from, it was almost inevitable that I would be chosen as a guinea pig. It was embarrassing but fun.  The show playfully dives into the lives and the bedrooms of the women of the polygamist community of Plentiful, a satirical jab at the real-life town of Bountiful.  It is totally fun from beginning to end and can be enjoyed this afternoon at 3:45 pm for the final time. 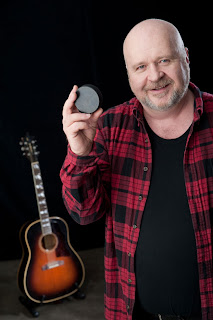 My sincere hope is that Councillor Phil Meagher gets a chance to see Charlie: A Hockey Story today at 1:30 pm as he is the biggest Maple Leafs fan that I know.  The incredible story performed by Jim Sands, focuses in on his Uncle Charlie, who was called up to play with the injury-riddled Toronto Maple Leafs during their 1932 playoff run.  There is a riveting play by play account of the second longest game in NHL history that took place between the Leafs and the Bruins on April 3, 1933 that will have you on the edge of your seat. 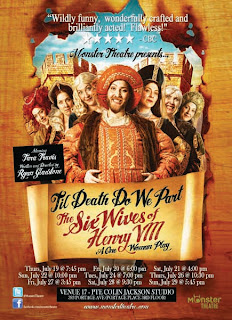 It is a rare occasion when an interPLAY performance inspires a standing ovation, but I was honoured to be among those who rose to their feet following Tara Travis's rendition of Til Death Do We Part: The Six Wives of Henry VIII.  She seamlessly played all six wives of the rotund king as they ascended into heaven, and even slipped into the skin of Henry when he finally kicked the bucket.  With nothing but her body, voice and a few pools of light, Tara portrayed a captivating debate between six distinct women as to who would sit at the right side of Henry VIII in heaven.  Hilarious, historically enlightening, exquisitely performed, Til Death Do We Part ranks right up there as one of the best shows I've seen in over a decade and a half of attending this event.  Thanks Tara. Her final performance is at 2 pm. 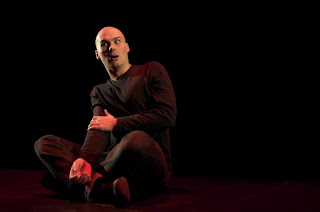 Finally, I got to see Jon Lachlan Stewart to close out my Saturday evening in Big Shot.  A surreal show, being performed for the final time at 5:15 pm today in the Keyano Recital Theatre, Big Shot weaves together a number of different characters in an intense film pitch by a young boy who witnessed a brutal tragedy on the Vancouver Skytrain.  Written by Jon, who performed on the Keyano Theatre stage a number of years ago in the production of The Blue Light (and who bunked at our house), this is a cutting-edge world-class performance worth seeing.  It's heady stuff though, and there is some pretty harsh language and simulated violence, so be ready for it.  One of the wildest theatrical rides I've ever encountered.  Great job Jon.

Putting together this festival is an onerous task for any team.  The core group that weaved together this year's festival did an admirable job considering none of them had any connection to the event previously.  And much like the Fort McMurray interPLAY Society board of directors and volunteers did over the last two decades, the Events Wood Buffalo team will review, refine, envision, adjust and tap into the heart of what makes interPLAY such a unique and important part of the cultural fabric of region.  They have our confidence and complete encouragement, not to mention our sincerest thanks for creating many wonderful memories in their inaugural effort.
Email Post