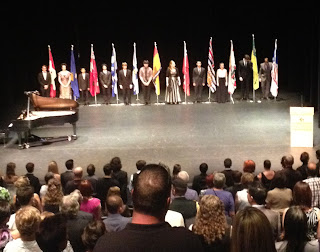 You've likely heard of the 10,000 hour theory espoused by Malcolm Gladwell in Outliers - The Story of Success.  As we sat in the back of the house at Keyano Theatre waiting for the start of the 2012 National Music Festival Grand Award Competition, I thought we were about to experience something special. I would guess that this collection of musicians were just getting warmed up by the time they hit the 10,000 mark.

I was hoping for a bigger audience to be perfectly honest.  This was a national level gathering of artists, a rare treat for Fort McMurray, but sadly it was only the usual suspects and classic music die-hards who were scattered throughout the 600-seat theatre, maybe a third of a house to honour students who had achieved excellence at both their local and provincial festivals.

Ben was particularly struck by the first performance of the MRU String Trio from Alberta.  The violin, viola and cello gracefully passed the melodic line back and forth, going through three movements of Serenade in C Major, op. 10 by Ernst von Dohnanyi.  Not only are they exceptional technical performers at this stratospheric level, they also demonstrated a stage presence that is world class.

Gerard Weber did his (and ours) home province of Saskatchewan proud with an alto saxophone performance that was expressive, surprising, and drop dead amazing.

"Buddy, that was incredible," I said as he walked by us at intermission.  "Go Riders!"

Janice Marple from Alberta did some vocal gymnastics with a few heart-stopping selections for soprano.  What was cool about the voice competition at this festival was that the adjudicator, now living in Mississauga, is originally from Fort McMurray and a distinguished grad of Keyano College - Laura Whelan.

Steve Cowan from Newfoundland and Labrador, blew us away with his classical guitar performance.  An avant-garde piece by Ginastera, Sonata Op. 47 had Mr. Cowan using every part of his instrument, from hitting the body to sliding his fingernails up the strings.  If audience response was any indication, then this impressive performance had to be a front runner for the $5,000 first prize.

"I'm afraid we have a slight change in the program," said Pam Allen, master of ceremonies and President of the Federation of Canadian Music Festivals.  "I'm afraid that Colleen has broken a string and cannot perform, unless someone has an extra E string back at the hotel."

Someone must have come through because Colleen, intense and elegant in her striking red dress confidently stood with her violin tucked under her chin, hands at her sides, waiting for accompanist Frédéric Lacroix to begin her Shostakovitch selection.  I'm happy to say she delivered a wonderful performance representing her home province of British Columbia, the replaced string a forgotten memory.

Jolain Goulette from New Brunswick made magic with the marimba, fielding and finessing four mallets to create a gorgeous soundscape, lunging from one end of the gorgeous instrument to the other.

The winner of the male spirit award, Jonathan Elliotson from Ontario, showed us what 10,000 hours of playing the trumpet sounds like.  He performed Legende by George Enescu eloquently and with total confidence.

And finally, Suren Barry, also from Ontario, sat down at the piano bench, adjusted the height, sat straight up and paused.  For five, maybe ten seconds, he was still, focusing all of his spirit into his upcoming journey through a five movement piece by Schumann.

Individually, these musicians knocked it out of the park last night.  But, collectively they represented tens of thousands of Canadian youth who make music from coast to coast.  As elected officials, as arts advocates, we need to do everything we can to encourage, support and inspire these young talents to keep playing, exploring and sharing.

"And the winner is..." began Pam Ellen, "Steven Cowan from Newfoundland and Labrador."

I kept thinking of Gladwell's 10,000 hours throughout the stunning evening of music, of how much time, dedication and practice goes in to reaching this level of excellence.  I kept thinking that I was in the presence of greatness, and that the moment needed to be savoured, as the chance to enjoy music of this quality is rare.

I'm grateful to the organizers, sponsors and musicians for putting on an evening of music that our family will never forget. Thank you.
Email Post