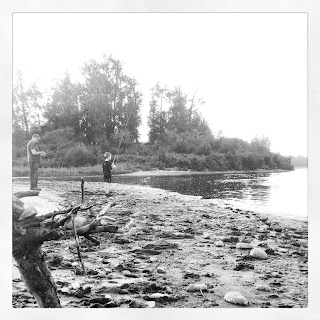 Conversations with strangers while sitting along the shore of the Clearwater River usually start with a question about what kind of fish we catch.

"We've been getting a lot of small walleye the last couple of days," I said.

"Walleye, really?" said the tall black man, framed in the hazy light of the early evening sun, hanging bright above the eastern end of MacDonald Island.

From What are you doing in Fort McMurray? to Where do you live? to Where is home home? a picture and a story began to take shape of a man steeped in gratitude harbouring a dark and violent past.

Owen is actually a family man from St. Albert, up in Fort McMurray for a time working a turnaround at one of the oil sands sites.  But way back into the early 1990s, he was a young man caught up in the war-ravaged African nation of Nigeria.

"People were captured, lined up and executed, right in front of me," he shared.

Brought up in a polygamous family with his father - a contractor who built homes and a trader, his birth mother - the matriarch of the house, five other wives, and some twenty siblings, the edge in Owen's existence was especially cutting.  His father and mother came from opposite sides in the brutal war that was ripping their country apart.

At one point, with federal officials about to close in, he vanished from his community and family.

"One day he just disappeared," said Owen.  "We couldn't know where he was hiding, for our own protection.  He was gone two years."

Owen made his escape in 1994, first going to Bulgaria, then on to Germany and finally the UK.  Coming to Canada about a decade later proved to be the best decision he ever made.

"The moment we arrived in this country there was a sense of peace and safety that we'd never known before," he said.  "I'm not sure if you have any idea how good you have it."

We talked about a lot of things sitting there waiting for the fish the bite: family, community, inclusion, diversity and oil sands.

He is befuddled as to why the environmental lobby is so opposed to oil sands development.  He described what happens in his home country, devoid of regulation and environmental controls.  Waterways are completely sacked of life, overwhelmed with pollutants, while wide swaths of forest have been decimated by unfettered flaring.

For Owen, who has a young family similar to my own, living in Canada is something that he treasures. I could see it in his face and hear it in his voice.  He knows what it's like to live in constant fear, paralyzed by the potential of violence and chaos, powerless to fully protect those you love.  If you ever become discontented or apathetic about the blessings we have living in this great country, all you would have to do is walk in Owen's shoes for a few minutes.  Very quickly you would discover the eternal gratitude that so many others feel to the depths of their being about being able to call Canada home.
Email Post