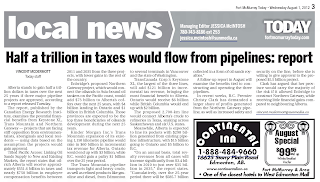 I woke up this morning to a headline in the Fort McMurray Today that suggested that projected taxes that could be generated by tpipeline projects on the books to ship out our product could approach half a trillion dollars.  Incredible.

When we talk to people about what's happening in Fort McMurray and with oil sands, we throw around a lot of big numbers.  From the hundreds of billions being invested to develop this resource to the number of barrels of oil we produce today (1.7 million per day) to the number we are expected to produce by 2035 (close to 7 million per day).  Honestly, I think having lived here for so long that I'm prone to becoming desensitized to the scope and scale of what's happening. 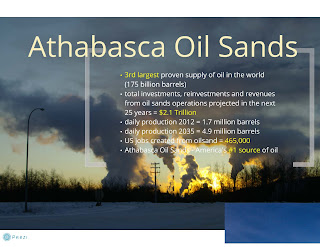 I've been driving back and forth to Fort McKay for 15 years and don't think twice as I pass by the massive Syncrude base plant, the most visible operation on that 45 kilometre jaunt north of the urban centre.

Let me back up a moment. 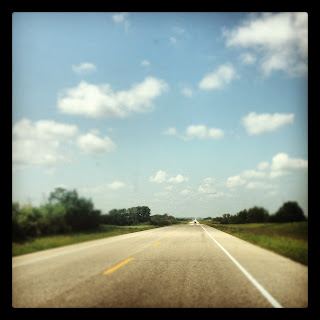 As we were driving back to Fort McMurray from our fantastic three days at Lac des Isles (near Meadow Lake in Saskatchewan), I realized that I desperately needed to get the Escape in for a service as Heather and the boys were scheduled to drive south to Calgary on the approaching weekend.  We called Northstar Ford to see if we could slip in for an appointment but they were already booking into mid-August.

"What about our Fort McKay facility?" asked the lady on the phone.  "We could get you in there right away."

As the imperative to put the vehicle through its paces superseded any inconvenience of having to drive a few kilometres out of town, we found ourselves in a mini-caravan going north last night.

The scale of traffic driving back to town on the other side of the divided highway was unbelievable - though likely completely normal.  You see, we live and work downtown, and don't often experience what so many of our citizens face every single day.  The continguous string of trucks, cars and buses patiently jogging home from a day of work in the oil sands stretched as far as the eye could see, almost to the base of Supertest Hill. 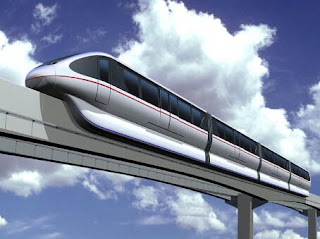 As we drove by the hundreds, possibly thousands, of vehicles, I imagined an elevated monorail system running through the middle of the no man's land between the two streams of traffic.  Lord knows the price would be extraordinarily high, but think about the positive impact on quality of life and the environment.  There are monorails in operation that go as fast as 500 km/hr.  Can you imagine?  A trip from a station at the bottom of Confed to Suncor would take you what?  Five minutes?

I'm guessing that there are hundreds of reasons why high-speed rail is beyond the pall of the possible - cost, engineering, political will, etc. - but it was fun to imagine what it might look like.

As we continued our drive north, the traffic heading back into town started to lighten up as we continued to motor forth at a nice clip, undeterred and carefree.

In my mind, the Fort McKay Industrial Park was on the north side of the Peter Lougheed Bridge (locally known as the Bridge to Nowhere).  Dylan's mom has a small confectionery/story in the park, and though I'd heard a lot about it, I had never actually been there.  We crossed the bridge and there was nothing but forest, forest and more forest.

Did I get this wrong? I thought to myself, wondering if the PTI development on the south side of the bridge was where I was supposed to have turned.  But I was sure they had said it was on the north side so we kept driving.

Finally, we saw a sign that said our destination was straight ahead and to the right.  Nothing had prepared me for the scale of the industrial park that lay just beyond the treeline.  Gargantuan buildings, huge shops and myriad companies - including Northstar Ford - are scattered over the site which, according to the Fort McKay Group of Companies website includes 20 huge lots are are completely leased and fully developed. 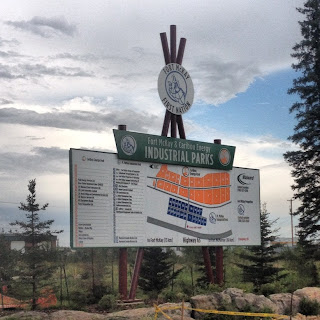 To be perfectly frank, I was blown away by what I saw.

"This is totally not what I expected," I said to Heather as we pulled into the new Northstar Ford facility to get some love and attention for our vehicle.

We dropped off the keys, piled into Heather's car and immediately began the return journey home.

The minor inconvenience of having to drive north for service provided a fresh perspective on the epic level of development and opportunity in our region.  I need to find more opportunities to take a road less traveled.
Email Post