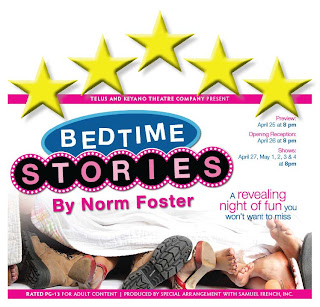 Heather and I went to bed last night recalling former Keyano Theatre Company (KTC) comedies, trying to decide if Bedtime Stories - which opened last night - made us laugh the most.  My gut was telling me, in several different ways, that I had never laughed so hard at a play.

Each of those shows had classic moments of hilarity and characters that will never leave us: Georg Gerow trying to stifle her laugh as Mother Superior in Nunsense, Gus Gianis rolling around in a wheelchair in It Runs in the Family, or Herb Stanley surprising all of us with his authentic comic timing in Only Drunks and Children Tell the Truth, all stand out in my mind.

But there was something extra special about Bedtime Stories, something unexpected and completely delightful, that vaults it into "absolutely can't miss" territory.

"A fabulous way to end the season," effused Sharon Heading on Facebook this morning.  She was sitting right behind us with two of her lady pals and I swear they were about to fall out of their chairs, they were laughing so hard.

Bedtime Stories by Canadian playwright Norm Foster is a series of 6 vignettes that all take place in the bedroom, stories and characters that criss-cross and connect.  Actors strategically play multiple characters, which brilliantly adds to the frenetic fun.

What can I say about 29-year KTC subscriber Kim Nolan, who took the leap on to the stage for the very first time, except "Why the hell did you take this long?"  His physicality was so interesting and unique that I couldn't take my eyes off of him, his comic timing, exquisite!  A teacher in the Catholic School district for almost three decades, now working with Keyano College, Kim is an incredibly bright spot in one of the strongest cohorts of KTC rookies that I have seen.

Also in that team of first-timers is Csilla Gresku.  Another staffer at Keyano College, she is brand new to the community and auditioned as a way of meeting new people and networking.  Now everyone is going to know who she is, because she tore up that stage playing the roles of Susan and Laura.  Bright, bombastic, clear in her intentions, and naturally funny, Csilla is a terrific addition to the KTC team.

It warmed my heart and tickled my funny bone to see (and hear) my friend Jane Leavitt on that stage.  One of our drama instructors and a director of many shows at the college, Jane's turn in Bedtime Stories was our first chance to see her perform.  Obviously having fun, everything she did and said exuded a love of process and an authentic connection with her fellow actors and the story.  I kept wanting the characters to go over to that radio and turn it on, just so we could hear her again!

This was Eric Dunham's first show in a couple of years and I'm so glad he's back.  As the fellow living out his last days he was grounded and honest.  As the aging rocker sporting an epic Twisted Sister look, he was absolutely perfect.  As the moving dude in the final scene he was relaxed, believable and ever so funny.  Special thanks to Eric's wife Jennifer and his children for lending their husband and father to this show.  It wouldn't have been the same without him.

I loved seeing Jennifer Townsend on the stage.  She has been an assistant stage manager on the last two shows I've done, always doing a great job keeping us organized.  As a second year drama student, she has developed some serious acting chops and was wonderful as the determined groupie trying to bed Tommy the rock star.

I'm so glad I sent that Facebook message to Ben McCully all those many months ago encouraging him to come out to auditions for Hometown...The Musical! and Bedtime Stories.  He rose to the challenge and heroically did both productions, back to back, with just a few days off in between.  He was the essential straight man in the comedic cavalcade we experienced last night.  Without his strong portrayals of Eddie, Nick and Charlie, it would have been a completely different show.  A radio personality by day, Ben has proven (again) that he belongs on the stage at night.

I was saying to Dylan, who attended the media call with me on Wednesday night, that it was hard to catch the comedy in the short scene that Misty Oakes did with Ben, a small slice from Act Two. But, within the context of the full play, the scene sizzled from start to finish.  Moving about the stage with her arm in a sling, writhing on the bed and blanket, Misty was hysterically funny as the accident-prone, dim-witted stripper.  She was equally delightful and dim as the errant hit-in-the-head-with-a-puck taxi driver Yolanda in the final scene.  Misty is at the front of the pack of a serious influx of talent that we've seen in the last few years at KTC.

Director Misha Albert gets the award for BEST PRE-SHOW SPEECH EVER!  The passion with which he welcomed the audience coupled with his sense of fun and frivolity was "frickin'" amazing!  He had the audience in stitches before a single word of the script was uttered.  Believe me when I say that the kind of magic we saw in Bedtime Stories doesn't just happen.  It requires the presience and personality of a director who takes the available talent, and integrates their individual qualities and quirks with the words of the script and the production design.  To say Misha did a brilliant job just doesn't do justice to what he accomplished with this team.

I rarely, rarely, rarely feel the urge to see a theatrical show more than once.  It happened with Jesus Christ Superstar in 2001 - I saw every performance, and it happened just a few weeks ago with Cheepiyak Theatre Company's Elephant's Graveyard.  It happened again last night.  Bedtime Stories breathes rarified air as one of the most delightful, laugh-filled, unexpected comic romps I have ever experienced.  If you don't find a way to see it before it closes next Saturday night, you'll be missing a production that will go down as a KTC classic.
Email Post