It's been fun bouncing emails back and forth with comedian Shaun Majumder the past few weeks.  Sharing his honest answers to random questions in Revealing Shaun Majumder was enormous fun.

I love the fact that he's heading out on a tour to raise money for a nonprofit back on his home turf of Burlington, Newfoundland and Labrador.  He believes in his hometown and is leveraging his talent and celebrity to encourage and facilitate economic innovation and development.  I think that's pretty cool.  In fact, it's awesome!

They sent over a news release the other day will the background on the initiative and on Shaun.  His resume is impressive, with a long list of credits that sets him apart from many of his contemporaries.  Now living in L.A., he could very easily get lost in the miasma of La-la land and the trappings of fame and fortune.  But, he has not forgotten his roots, and he is investing his time, energy and financial resources to celebrate and support his rural Newfoundland roots.

An Evening With Shaun Majumder is at Keyano Theatre on May 12th.  Just under a month away, it's already 50% sold with only a few Facebook and Twitter posts.  I wouldn't wait much longer to get yours.

Here's the News Release I forwarded on to local media on their behalf a few days ago: 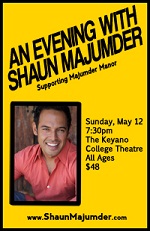 A familiar and iconic face of Canadian comedy is coming to Fort McMurray to raise funds and awareness for a community development initiative in Newfoundland.  An Evening with Shaun Majumder will take place on Sunday, May 12 at Keyano Theatre.  Net proceeds will be going to BSM MANOR (Burlington-Smith’s Harbour-Middle Arm),  a not for profit that will create social businesses and help fuel an economic engine that will contribute to a new, significant tourism destination on the Baie Verte Peninsula, NL.  Given the expected growth of tourism after the airing of Majumder Manor an 8-part documentary series following the comic’s efforts in Burlington, there is great optimism for rural tourism in the region.

“I know there is a strong connection to rural Newfoundland with many of our brothers and sisters who have migrated to Fort McMurray for the opportunities over there,” said Majumder, one of the stars of This Hour Has 22 Minutes.

“This performance is all about raising money and awareness for this initiative.  The overall community development project includes the construction of a community greenhouse and subsequent “Hummock View Greens”, upscale camping or "Glamping", along with remote guest cabins and eventually a central lodge (Manor) and restaurant.  Like many rural places in Newfoundland, residents typically must travel to other provinces for months at a time to work at seasonal jobs.  We hope to reverse this trend and give residents a viable employment alternative close to home.  I’m guessing that our friends in Fort McMurray will be excited to be a part of this exciting and important venture.”

Raised in Newfoundland, now living in Los Angeles, Shaun Majumder’s television appearances have included starring in the Farrelly Brothers comedy Unhitched, as well as roles on 24 and Cedric the Entertainer Presents on Fox, Robson Arms on CTV, and Da Kink in My Hair on Global. In addition to his multiple appearances on This Hour Has 22 Minutes, Shaun has appeared in Hatching, Matching and Dispatching and Republic of Doyle for CBC Television. Shaun's Comedy Central Presents special also debuted on Comedy Central in 2008. Shaun most recently played Andrew Palmer on the NBC/Global Television series The Firm, starring Josh Lucas and Juliette Lewis, and in 2010 starred as Det. Vik Mahajan in the critically acclaimed drama series Detroit 1-8-7 on ABC.  HBO’s feature documentary Every Word is Absolutely True followed Shaun as he embarked on his first national standup tour, garnering critical praise for its candid look beyond the public persona to reveal a more intimate and complex side.

“For me, the heart and soul of Newfoundland and Labrador is rural,” wrote Majumder in an interview with local blogger Russell Thomas.  “It’s where stories are born. Storytellers are rampant. It’s unfiltered life.  What you see is what you get.  And, to go there and leave wherever you are from, is like visiting another planet.  Even for townies, time takes on a whole new meaning, and the feeling like there’s always something to discover is ever persistent.”

Money raised in Fort McMurray on May 12 will go directly to hiring 2 employees at the newly constructed greenhouse as well as outfitting the prospector tents to be rented over the summer. Tickets are available now at Keyano Box Office, or online at www.keyano.ca/theatre.  For more information FOLLOW Shaun on Twitter @shaunmajumder or LIKE his Facebook page at www.facebook.com/shaunmajumder.