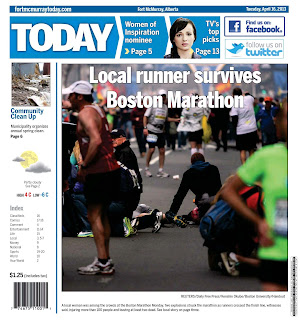 Unbeknownst to me, I had a different dental hygienist yesterday morning, because Rebecca, who has given my teeth a shine on more than one occasion, was busy running the Boston Marathon. She crossed the finish line about 20 minutes before the first bomb went off at 2:50 pm EST, followed a few seconds later by a second.

According to a story in the Fort McMurray Today, Rebecca and her sister, veterans of the iconic race, looked back and saw smoke.  At first, they didn't think much about it, but as they began to notice the reaction of others and were told to get off a subway train, it became clear that things were not normal, that a significant event had occurred. 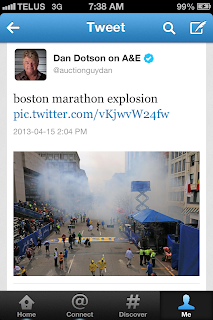 I can't imagine what was going through Tod's mind, Rebecca's husband and my dentist, as the Twittersphere blew up with news about the attacks.  His voice was all around me yesterday morning as I lay in that chair at the Graystone Dental office on Main Street, familiar, reassuring.  I'm sure it must have taken on a different pitch and tone as it was a full hour after the blasts before he got confirmation that Rebecca was safe and sound in her hotel room.

Canadian connections to this event were in abundance, as the race attracts long distance runners from all over the globe.  Speculation as to "who" and "why" began almost immediately, an unavoidable response from media folk charged with filling in the vacuum created by the panic that ensues in the aftermath of an event of this magnitude and shock value.

Not too many years ago, rich content capturing a tragic event like this would have been the sole domain of the media, as reporters and photographers scrambled the scene to get find images and video footage that would help tell the story.  Today, almost everyone is reporter-enabled carrying their mobile devices.  Yesterday, at the finish line of one of the most well-known long distance races on the earth, cameras were rolling and the now familiar blast and plume of white smoke that billowed out on to the street became instantly ubiquitous. 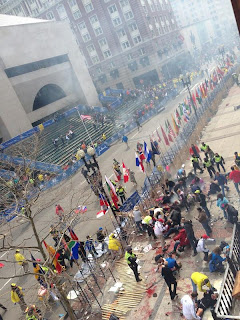 Uncharacteristically graphic images of the carnage, shot from both the street level and from above, spread around the world within minutes using social media platforms like Facebook and Twitter.  The combination of the place - Boston, the event - the Marathon, bombs - 2 with conjecture about more, multiple injuries - 130+, and deaths - 3 (so far), made this a perfect storm in terms of spreadable media.

How would this exact set of circumstances been spread 20 years ago, before the proliferation of the Internet?

Newsrooms around the world would have begun seeing sketchy reports of some kind of explosion at the finish line of the Boston Marathon on their teletype machines - news, sports, lifestyle and weather news that spewed content 24-7 printed out on long rolls of newsprint from whatever news source you subscribed to.

For those watching television, likely their favourite show would have been interrupted with a brief few sentences and perhaps some visuals of the scene, but this would have been many minutes, possible a half-hour post-event as the technology didn't exist to turn it around quicker.  Two decades ago, CNN would have been the place to go to find out the latest.

But, for the most part, news of an event like this would have spread at a much slower pace.  The major news organizations had the lion's share of control of both content and distribution.  People looked to the iconic news anchors and reporters of the day to give them the full story and dove into the morning papers the following day by the hundreds of millions to get all the details.

How times have changed.  Tweets went out mere seconds after the concussion of the first incendiary device.  Speculation is that Kristen Surman was the first, as the time stamp suggests.

Rich content followed just minutes later.  Traditional media today is put in a position of playing catch-up with Joe Citizen, doing their due diligence to verify facts, and try to make sense of the clutter created by chaos.  Everyone still has a role, it's just that the order of things has been reversed.  In many ways, we still rely on the traditional media to confirm, clarify and chronicle.  That may never change.

Our thoughts and prayers are with those suffering this morning, either from injuries received or from loved ones lost.
Email Post