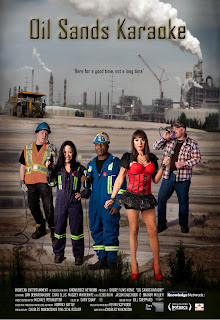 Charles Wilkinson and Tina Schliessler wandered into my office many months ago it seems, introducing their documentary film concept and looking for local connections to help fill in the gaps and get a better sense of our community. 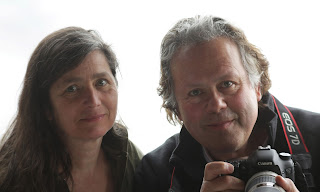 I enjoyed our visit tremendously, as they were both warm-hearted, creative and inspiring people.  Outside of a few post-visit phone calls and emails, that has been the extent of my involvement with Oil Sands Karaoke, the full-length feature documentary film that will be debuted at the Isabel Bader Theatre on Friday at the Hot Docs documentary festival in Toronto.

Events Wood Buffalo and Your McMurray Magazine (YMM) are co-presenting a red carpet screening of Oil Sands Karaoke here in Fort McMurray on Thursday, May 9th with two community screenings on May 11th at 2 pm and 8 pm.  All three showings will take place in Keyano Theatre on the giant 40' screen, the largest in the region. Tickets are available at Keyano Box Office, by calling 780-791-4990, or by purchasing online at www.keyano.ca/theatre. 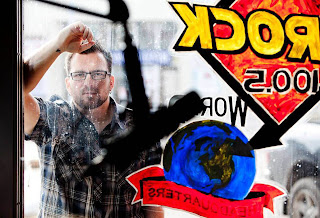 The red carpet screening will start with a reception at 7:30 pm, the screening of the film at 8:45 pm,  followed by a panel discussion and audience Q&A with film director Charles Wilkinson, Massey Whiteknife (Iceis Rain) and Mayor Melissa Blake.  Be sure to stick around for what promises to be an interesting chat that I'm humbled to have been asked to facilitate. 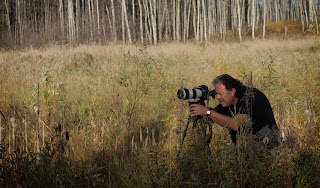 I thought it was important to gather some context and insight from Charles in advance of seeing the film.  So, I fired over some questions by email and he was kind enough to get them back to me right away, despite a frenetic schedule and lots of activity with the Hot Docs event.  Thank you Charles!  It's clear to me that these Fort McMurray screenings are important to both him and Tina, as they established an affinity with our hometown during the time they spent with us. 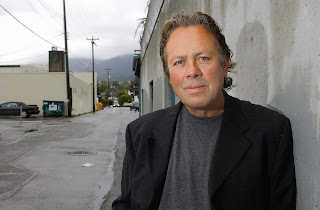 RVT:  Did you come to Fort McMurray with the intention of telling this story, or did the story reveal itself to you after visiting?

CW:  We came with a pretty clear idea of the story.  But it took quite a few visits the year before to really get and refine the idea.

RVT:  As you came to know the characters in the documentary, were there resonant themes or similarities in tone and texture that emerged? 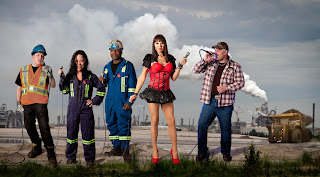 CW:  Absolutely, quite a number of them.  Most people we worked with have a love for music and entertaining, they love the pioneer aspects of life in a relatively remote place like Fort McMurray (FM), but most acknowledged that loneliness can be a problem.  Most agreed that working in a place and industry that so many people outside have such strong opinions about can be a real strain, and most (not all) were initially motivated to come up to FM by financial issues, although all agreed that life in FM can be pretty damn good. 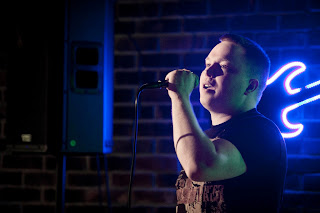 RVT:  What surprised you about the resulting narrative captured by Oil Sands Karaoke?

CW:  I guess that getting behind the headlines – the worst/best place on Earth stuff - and really starting to get a feeling for the people of the region, learning that we all pretty much feel the same, and want the same things.  That shouldn’t have been so surprising – people are people.  But the media messages can be so powerful.  It was like the first time I saw a suburb in Las Vegas and saw kids playing ball on the street.  Like I thought that everyone in Vegas works in a casino, kids included? 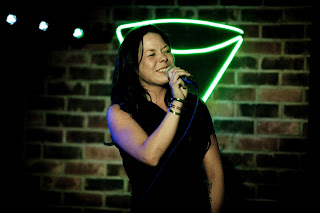 RVT:  How understood (or not) is Fort McMurray and Wood Buffalo beyond our borders, based on your experience?

CW:  I think both the region and the oil companies could do a better job engaging with the public.  The Chamber Of Commerce publicity tends to imply that there’s this huge line-up in heaven made up of people frantic to get to live in Wood Buffalo.  Most people just roll their eyes at this.  Yeah, there’s great stuff in FM and there are some very committed and intelligent individuals working tirelessly to create the opportunity for residents to build a home – with all that the word ‘home’ truly means.  But there’s a ways to go; there are problems that need addressing.

The oil companies tend to create publicity that ignores the mindset many people have when they consider industrial activity.  I think many Canadians are intelligent and well informed.  They’re well aware that the resource sector, and the mining sector in particular, has a relatively poor record with respect to the environment and reclamation.  So it’s completely predictable that a large percentage of Canadians are going to take glossy energy company PR with a grain of salt – and that some will be actively hostile.  My personal sense is that I know there are some serious and respectable efforts being made by Syncrude, Suncor and others to take their responsibilities seriously.  If they were to stop with these ‘Building your future in an ethical, responsible way for all Canadians’ ads and get a bit more real, I think a lot more Canadians would be willing to give them the benefit of the doubt.  Why not an ad that shows scenes of abandoned mines with a voiceover that says: “Yes, the mining industry has behaved badly at times.  And we admit there are some huge challenges to producing our product cleanly and having others consume it in a sustainable manner.  But we’re absolutely committed to doing just that.  We’re here for the long haul, and so are our grandchildren.”  This as we switch to scenes of families hanging out in Syncrude’s Buffalo Pasture or Suncor’s Wapisew site. I’d be influenced by that – especially if the companies then went on to be transparent about their efforts in this regard. 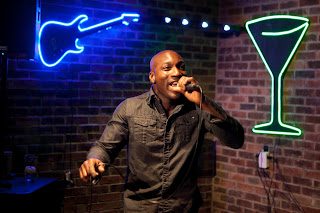 RVT:  Will this film help those from away develop a better sense about what really happens here? And if so, how?

CW:  It’s already helping in a small way I think. We’ve shown it to people who are dead set against everything FM stands for and they’ve ended up saying things like – “Those guys seem really cool.  They’re just like me."  "Gee, haul trucks kind of rock."  "Wow, I didn’t realize there are subdivisions up there, and a lake."  "It’s true, when gas came from the Middle East I never thought about their environmental record.”

And when we show it to pro industry people we’ll get comments like:  “It’s really great to see a story about FM that isn’t cliché or BS.”  And things like: “Wow, I thought I was the only one who had misgivings and unanswered questions.  Maybe it’s okay to start talking about this stuff.”   We’re finding the film is helping to get a conversation going between people who don’t normally talk.  Someone joked that this film will get the hippies and hardhats to sit down together.  Hope so. 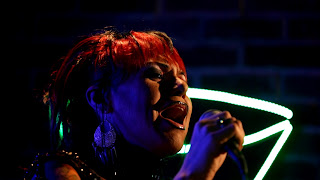 RVT:  Pulling back from the enormous time, effort and funds that went into the making of Oil Sands Karaoke, how do you feel about the finished product?

CW:  We’re really proud of it Russell.  Tina and I feel about the characters in this film like they’re our brothers, sisters, kids.  And most people who watch the film can’t help just plain liking these crazy guys from FM.  And the music just makes us happy.  Interesting note – I’ve been a pro musician off and on since the age of 5 (way back in my Calgary cowboy days).  So when we discovered that there were some tech problems with Jason Sauchuk’s karaoke background track for "Simple Man", I was thrilled to jump in and perform the guitar, bass and strings for the movie track.  That was cool. 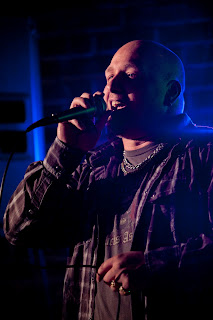 RVT:  How do you think locals will respond?

CW:  I think most people will see a reflection of themselves – both the strengths and weaknesses, but mostly we hope they’ll see the respect we have for them as human beings and for the humanity we share.  At a lighter level, I’ll be surprised if people in FM don’t sing along and cheer for their friends.  We do.  There will inevitably be people who feel that by acknowledging both sides of the climate change debate that we’re taking shots at FM and trying to take away their livelihood.  That wasn’t our intent – we all have to eat; I love my motorcycle.  It’s interesting, we met a few people in FM who would say things like: “What those ‘scientists’ say – that’s all BS.”  It’s like they think if they can cast enough doubt on the science that people everywhere will stop obstructing oil and gas.  What many don’t realize is that the scientists are not your biggest problem.  It’s the hundreds of millions of your fellow humans who absolutely believe we have a problem that needs addressing.  And until you engage with these folks and start working together with them they’re going to keep doing everything they can to get in your way.  But what we hope everyone takes away from the film is that we agree on some stuff.  Stuff like Britney Spears songs make everybody groan but secretly sing along.  And that’s a real start. 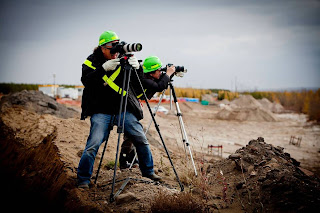 RVT:  Can you share next steps for Oil Sands Karaoke?  Where and when will it be seen?  Will it be available for purchase?

CW:  Michael Moore documentaries get released in mainstream theaters all over because he’s a famous entertainer.  Movies like Oil Sands Karaoke have to prove themselves first.  The way we do that is with film festivals.  If we do well at Hot Docs (which is a huge honor to be included in – both to us and to FM), then other festivals will be more likely to invite us.  Best case:  if the film consistently attracts paying audiences (not that doc filmmakers tend to see much of the dollars at first) then the big distributors take note.  Bob and Harvey Weinstein invest the millions of dollars required for a national theatrical release.  Tons of people come see it, it gets nominated for an Oscar, we get rich, buy a jet, fly back to FM on your fuel and complain about what you all do.  Seriously, back in reality, we hope for some good festival play worldwide, some good TV exposure, it will definitely be broadcast a lot by the amazing team at Knowledge Network in Western Canada in the Fall, video becomes available in the Fall as well and Tina and I will hopefully get to go on doing what we love.

Please tell all your friends in Toronto to come see the show.  That’s the first big step.  And see you all in a few weeks.


To read more about Charles Wilkinson, check out his website:  www.charleswilkinson.com.