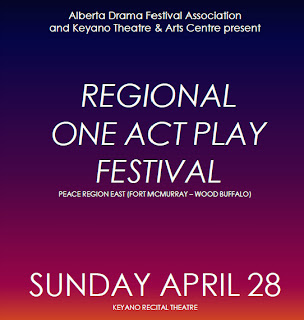 I really should be working on my Twitter 101 presentation, as it is coming up on Tuesday morning and I still have work to do.  But....I seem to think better under pressure, so I'll distract myself by sharing what happened this afternoon at the Regional One Act Play Festival that was hosted at the Keyano Recital Theatre.

We were treated to four incredibly disparate presentations that took us to the edge, on the road, to a television studio set, and beyond.

Backing up for just a second.  This festival began a number of years ago - 2008 actually, as part of the first iteration of the WinterPLAY Festival.  We hosted the Regional One Acts that year in February, in preparation for the Provincial Festival that we hosted in May.  It provided the needed catalyst for us to dive into the one-acts universe, a space that we hadn't played in as a community for over a decade. 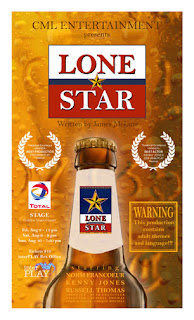 Kenny Jones and I performed in Lone Star that year, representing our region in the provincial competition.

It was inspiring to see how far things have come under the leadership of Michael Beamish, our representative on the Alberta Drama Festival Association (ADFA) board.  He's also been leading weekend workshops that helped encourage the first two presentations of the afternoon.

Nolan Haukeness, of Rock 97.9 and Hometown fame, presented a stage reading of his partially completed (and first) play, Order of the Black Cloaks.  Performed by Misty Oakes, Anthony Wall and Brodie Dransutavicius, the amusing coming together of three embittered souls lusting for the heroic hereafter really connected with the 50 people in attendance.  Misty's timing was bang on as were the characterizations delivered by both Brodie and Anthony.  I'll be first in line to see this one when it gets staged, hopefully at the 2013 interPLAY Festival.  Well done Nolan!  You are a man of many talents.

Sister So (Sonia Burke-Smith) was a colourful and comedic host of the Tonight with Autism show. Developed as a way of bringing autism out into the open, the show featured my friends Mattea Adair and Marcel Baron, along with a young lady named Maria.  Watching Mattea and Marcel grow in confidence as part of our Hometown...The Musical! family was one of the highlights of the process for me.  Mattea, once quite shy, was calm as a cucumber during one of our performances as the both of us ended up on our derrieres, backing up a little too far and tripping on the drum riser as the curtain came down at the end of Act One. 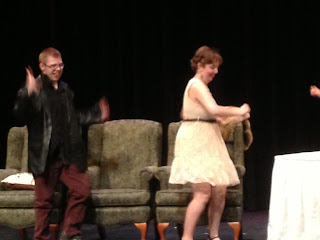 I was so proud of them as they settled into their guest chairs and answered a range of questions lobbed by Sister So, giving their responses loud and proud.  Through the creative process, these two autistic adults have made many new friends, found their voices, and inspired all of us.

Barefoot in Nightgown by Candlelight written by Don Nigro featured three incredibly strong actresses with a startling emotional range: Misty Oakes, Amanda Campbell and Michelle Thorne.  As three friends engaged in a nocturnal game that pushes each of them to their limits, they transported us into the darkness, through the fire and to the edge of our seats.

I was transfixed by the direction of Misty Oakes, her bold choices, innovative use of space and light, and the construct of the game.  All three performances were strong, the chemistry among them sinuous and sensual.

"Wow!" I said in unison with Ben McCully sitting to my right.

"My heart's still pounding," said a lady in the row in front of us.

Pattie Dwyer had warned me not to bring my son Ben to see her show, as the content would be quite disturbing for kids.  I decided to bring Dylan anyway, as he is wise beyond his years, and keenly interested in theatre.  I'm glad I did. 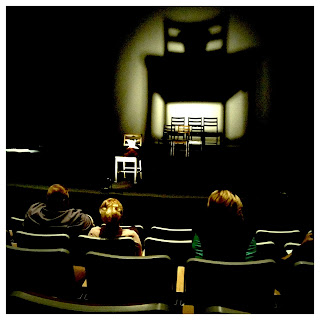 See Bob Run by Daniel MacIvor is a heady piece of theatre, imbued with painful and confusing undercurrents, a monologue that stretched over 70 minutes taking Pattie from her seat in the back row of the theatre, on to the stage and back again.

Directed by Michael Beamish, this acting tour de force soared thanks to excellent use of four chairs, cutting light beams, and the entire theatre.

Adjudicator Jan Taylor, Artistic Director of Kompany Family Theatre, has been staying at our house.  "That was an amazing afternoon," she said, returning after dinner.

She was obviously conflicted about several of the decisions she had to make.

"I've adjudicated high school festivals in the past and usually the winners are pretty clear," she shared.  "That is not the case today." 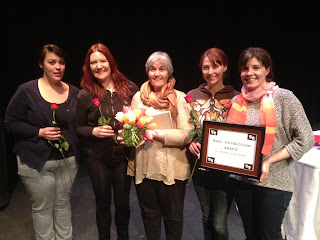 In the end, it was announced that Barefoot in Nightgown by Candlelight will be representing our zone at the Provincial Festival in High River, winning the Best Play award.

Michael Beamish won the directing prize and the award for technical achievement, Pattie Dwyer and Michelle Thorne both won acting awards, and Nolan Haukeness was recognized for his new play.  All in all, it was a magnificent afternoon of theatre.
Email Post