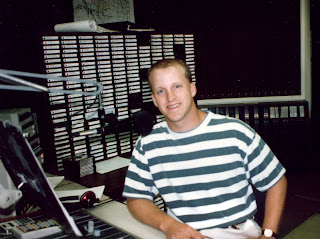 I have this "thing" where my middle ear fills with fluid, doesn't drain, and renders my tympanic membrane (eardrum) immobile, greatly reducing my hearing capacity on my left side.  For years, I thought it was my comeuppance for a decade of listening to music too loudly when I was in the radio business.  But, thanks to the audiologist, a number of years ago I happily discovered that my hearing was fine, I just needed a short procedure from the ENT doc to get the eardrum moving again.

The first time he poked a hole in my eardrum, sucked out the fluid and inserted a tube, I was drunk with sound.  After being functionally deaf for so many years, my brain was overwhelmed with new sonic sensations.  The second time - eventually the first tube fell out and the eardrum sealed over - was slightly less dramatic.  The third time was yesterday.

The years flow together, but at some point in the late summer or fall of 2012, I sneezed too hard or did something else to cause ear tube #2 to dislodge, slowly, incrementally stealing away my hearing just in time for Hometown...The Musical! when I really could have used it.  Standing on stage right on the upper platform singing "Fix You" was incredibly difficult as the music of the band was on my deaf side.  Due apologies to Ben McCully and Russ Hancock if I was a little out of tune.

I've learned to compensate for this minor inconvenience, turning my head and looking at the person speaking with me on the left, watching their lips to confirm the words I think I was hearing.  Just yesterday, talking with Alan Humphries, Deputy Minister of Transportation, I really had to twist my head to catch the entire brilliant answer he was giving to what I thought was a floating curve ball question.

In lively rooms, like boisterous restaurants or noisy pubs, it has been especially challenging for me to capture all the nuance of conversation.  I've often been forced to ask people to repeat themselves.  "What was that again?" - a question that I look forward to not asking for at least a couple of months.

Dr. Kudryk had me lay down, tilt my head to the right, and he worked his magic.  It took all of 10 minutes from start to finish: poke, suck, insert, and suck some more.

I lifted myself up, a little dizzy to be honest from my brain trying to sort out the increased flow of data coming in through my left ear.  Slightly off balance, I put on my suit coat, ambled out the door and down the hall.
Email Post