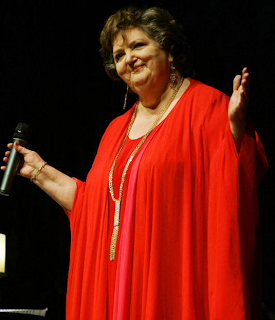 In piecing together the clues, I'm guessing that it was about 12 years ago that Rita MacNeil played to two full houses, on successive nights, at Keyano Theatre.  I was the emcee for both of those performances and had the unique perspective of watching the shows from the wings on stage right. Apart from marveling at her vocal power and the response she inspired from the boisterous crowd, I was blown away by her repartee, the fun talking bits between the songs.  For a notoriously shy person, she seemed completely at ease in front of an audience and made some of the strongest personal connections that I had ever seen up to that point and since.  The jibs, jabs and observations seemed completely natural and off-the-cuff.  I was understandably shocked during the second show the following day, when she repeated the exact same collection of jibs, jabs and observations, just as naturally as she had done the day before.

I'm thinking that the concert was at a time just prior to the advent of digital photography.  Somehow, I had had a picture taken of Rita and I, got it printed, and brought it back the second night.  That picture, signed by Rita as a birthday present to my mom, still hangs in the entrance area of the home of my youth in Kamsack, SK.  I was wearing a light brown cashmere suit jacket that I only recently donated to the wardrobe collection at Keyano Theatre because it was too big, I have shrunk 15 to 20 pounds since that time.

I might have been there as a radio person, which would have meant her concerts were pre-1999.  Or, I was there as the publicist of Keyano Theatre and Arts Centre, which would have made it 1999 or after.  I'll be checking in with my mom later today to see if we dated the picture hanging at the house.

When I got on my computer this morning I found out that Rita MacNeil had died yesterday, after complications from surgery.  She was 68.  Her songs, stretched out over 24 albums that sold millions of copies, evoked strong emotions, the spirit of the marvelous people of Cape Breton where she was born and raised, and of hard-working Canadians.  In person, she was soft-spoken, gentle, intentional, warm and entirely welcoming.  It was one of the honours of my career to spend time with her in those quiet moments in the dark of the wings before getting the cue to start the show.  She will be missed by a nation, and never forgotten.

PS. Coming into work this morning, I checked with Alan Roberts, Director, Keyano Theatre & Arts Centre as to the actual year that these two concerts occurred.  I was wrong.  They actually happened almost 17 years ago.
Email Post