I was blown away by the Bo Cooper fundraiser hockey game and auction that took place in Anzac last night.  Dozens and dozens of people parked their personal Christmas activities and put together a world-class event in just a couple of weeks.  It was nothing short of remarkable.

Melissa Campbell was the amazing volunteer coordinator who took care of me when I arrived.  She knew exactly where she wanted me to set up, in a cool spot surrounded by benches and beautifully lit.  It was perfect.

I usually have the canvas sketched out before I arrive at a live painting event, but it had been a rather busy day of painting and I ran out of time.  So, as soon as the easel was up, I was busy sketching out the image of Bo that had grabbed my attention.  After a wonderful bowl of Anzac-made stew, I started painting at 6 pm. 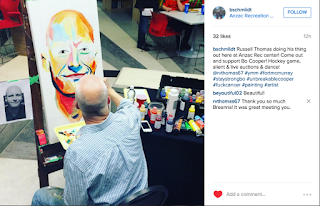 There were so many things I loved about this experience, but that fact that so many young people came by to watch tops the list.  A rotating group of kids would quietly sit for awhile and just observe what I was doing. 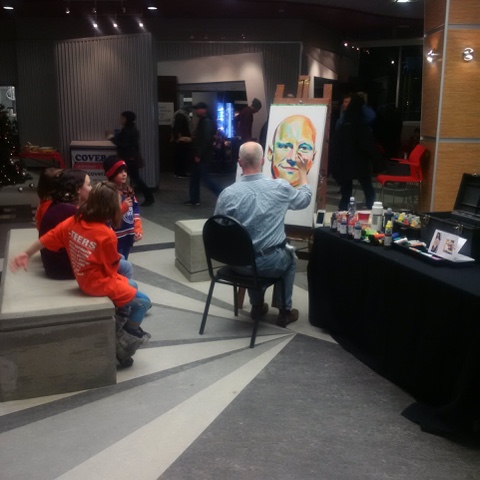 "You're cheating," said one kid.  "You're copying from a picture."

I loved the fact they asked questions and made comments.  Most importantly, I'm glad they took the time to watch the painting come together. 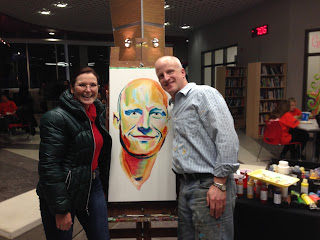 It was great to see many old friends who had come out to Anzac to support Bo including a huge contingent from the Fort McMurray Fire Department, Mayor Melissa, and MLA Tany Yao.  It was also a highlight to get a hug from Pauline Gauthier, long-time electoral officer in our region.

"I had no idea you had this talent," she said, shaking her head.  Pauline and I go way back.  She helped prepared the amazing meal at the very first public fundraiser I attended in Fort McMurray in 1996 for the Fish and Game Association. 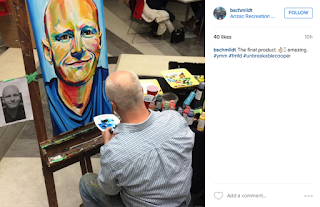 As the minute hand crept up on the nine o'clock hour, I furiously finished up some last details.  I motioned for Alexandria Pitchers, the daughter of a fire fighter, to come forward.

She nodded her head, came forward and put that white dab in exactly the right place. 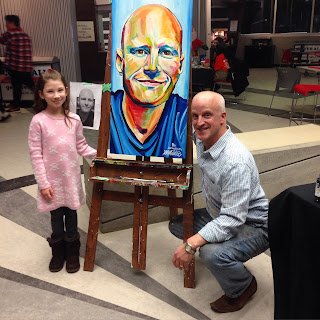 A part of me wanted to inscribe the Man in the Arena speech from Teddy Roosevelt into the piece, but I couldn't figure out a way to do it with the time I had remaining.  So, instead, I titled the painting "Daring Greatly" because that is what Bo and everyone who is surrounding and supporting him are doing. 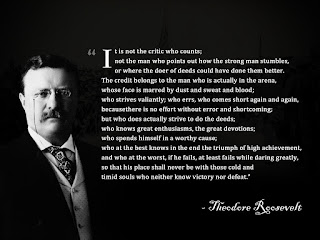 I close out this post with that amazing speech from over 100 years ago, as it reflects so much about why this community is rising up in this magical way for this brave young man who is battling for his life.


THE MAN IN THE ARENA
Excerpt from the speech "Citizenship In A Republic"
delivered at the Sorbonne, in Paris, France on April 23, 1910

It is not the critic who counts; not the man who points out how the strong man stumbles, or where the doer of deeds could have done them better. The credit belongs to the man who is actually in the arena, whose face is marred by dust and sweat and blood; who strives valiantly; who errs, who comes short again and again, because there is no effort without error and shortcoming; but who does actually strive to do the deeds; who knows great enthusiasms, the great devotions; who spends himself in a worthy cause; who at the best knows in the end the triumph of high achievement, and who at the worst, if he fails, at least fails while daring greatly, so that his place shall never be with those cold and timid souls who neither know victory nor defeat.
Email Post