We have made the drive home to Kamsack many times over the years. It has happened from multiple places that I have lived including Vancouver Island, Stettler, Drumheller and Fort McMurray, but all paths converge into one and familiar markers that signal both that we are getting closer and the passing of time.

This time around we went from Prince Albert down to Melfort and south to Watson and Highway 5.  Watson and its special attraction along the highway is one of the first markets that we are getting closer 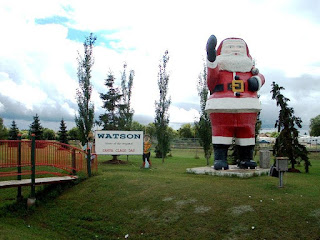 "There the big santa," said Heather, loud enough for Dylan and Ben to hear her over whatever they were listening to on their ear buds.

Continuing on we passed through other familiar towns like Quill Lake, Clair and Wadena.  A little further down the line is Rama, a place that consistently reminds me of the passing of the years.  We had played volleyball in the school that is adjacent to the highway back in 1984 or 85.  It has long since been closed, abandoned, repurposed, and abandoned again.  Thirty years is a long time in the life of a public building no longer in use; it shows.

Just before Canora is a tiny outcropping of a place, ironically enough called Tiny.  The announcement of "There's Tiny," is always followed by the inevitable "Where?" and "Sorry, you missed it."  Each trip back, I keep expecting Tiny to completely disappear as it has willowed away to a single building.

Mikado and Veregin then we come in sight of the Assiniboine River valley and the town of Kamsack.  I have always thought that this view is pretty spectacular, though it has also changed over the years.  The water towers seemed to pop out of the vista more strongly than they do now.  I'm not sure what is different just that it is. 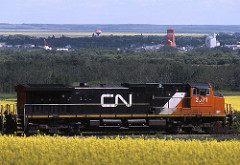 As we crossed the bridge over the Assiniboine into the town, businesses that were under construction that last time we were here over a year ago are now fully operational.  This introduction to the community has change a lot over the last 40 years.  A refinery, Sunset Drive-In, Greasy Annie's, Arrow and elevators all once resided along this short stretch of highway.

My mom and dad have lived in the same house all of our lives.  They purchased the house in the early 1960s.  I can't imagine them not living in it, though that day will eventually come.  However, we often reflect on how fortunate we are that they are so active.  They are both well into the senior years - Dad is 80, Mom is 72 - but they are both still fully independent.  I'm sitting here at the dining room table typing this blog post at just after 7:30 in the morning and Dad has already shovelled the entire sidewalk here at the house while Mom has done the same at the church, just prior to going inside and practicing the organ for tomorrow night's service.

As I look around I see the present and the past.  Behind the kitchen door are the yardsticks that have been in that spot as long back as I can remember.  Keys still dangle from the mail holder that we bought for them over 30 years ago.

I commented on how the credenza that sits in large alcove - built by Mr. Becker in the 1970s - has a darker tone to it.  Mom grimaced as I mentioned it, as it became clear that this was another victim of my dad's incessant need to paint things.  I think it looks really good, if I'm being honest, and actually matches a historic piece of furniture that came over from my grandparent's house after they passed.  My siblings will understand this irony immediately.

Heather and I are sleeping in the bedroom of my youth.  it is very familiar and a similar orientation to our bedroom back in Fort McMurray.  I was a little time deprived as there was no digital clock for me to reference last night, so I had no idea as to the time.  Sure enough, I got up and discovered that it was right around 6 am, the usual time that I get up.

It's good to be here, recognizing that being able to "come home" is a gift.  I know that a lot of people don't have the good fortune to be able to go back to their childhood in this tactile way.  I am grateful.