Who will be mayor? 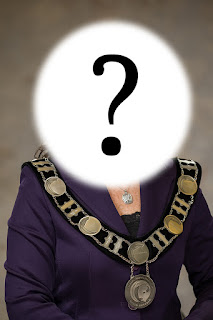 In less than two years, municipal elections will once again be upon us.  Our current mayor and council are past the half-way mark in their 4-year term of service.  Tongues are already wagging about what will happen next.

Behind the scenes, speculation is in full force as to who will put their names on the ticket for mayor.  Mayor Blake has had an incredibly long run in the top job and may be ready to hang up her skates.  If she does, who will step forward to vie for that comfy chair in the middle of the council horseshoe?

There are a number of people that I think will run; there are others that I hope will run.

Several councillors, though they may deny it vehemently, appear often to be jockeying for position.  I would caution against leaping to that conclusion based solely on their visibility factor and how much they like to talk in and out of chambers.  Using those two measures has proven wrong in the past in terms of predicting who is willing to take their chances on the mayoral section of the ballot.

When I look around the horseshoe I see several younger members and one or two of the more seasoned souls who could very likely run.  Several of those, in my opinion, would do a stand-up job of representing our region and keeping proceedings in council chamber moving apace.

There are two or three former councillors that could also re-enter the fray.  One or two, in particular, would have my unqualified support if they decided to do so.

My word of caution to anyone willing to put their name on that ballot is that you should spend lots of time in the sun in the next two years...to toughen up your skin.  More often than not, everything is your fault when things go wrong - though nothing could be further from the truth.  It gets personal often, and even though you have the best interests of the community at heart, your integrity, honour and motives will get called into question almost every single day.

Oh yes, and the Mayor is a full-time gig, meaning that leisurely time spent with your family and uninterrupted relaxation time will be a thing of the past.  You would be a public servant on payroll and requested to be at special events constantly.

IF you have a passion to serve, a willingness to jump in and be super present in the region 99-percent of the time, and the courage to withstand the slings and arrows of outrageous fortune; IF you have a natural talent for herding cats and getting them to play nice with one another; IF you are comfortable with public speaking and can keep your head while all about you are losing theirs and blaming it on you; give it a go.