If there is one thing I have learned in this wild colour painting journey it is that narrative is everything.  A painting may be somewhat pleasing to the eye or provide a little shock value with the colours that are used to capture character, but absent of story, it is just a painting. 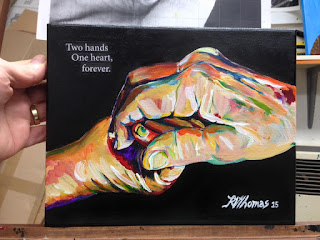 This could be viewed as two people holding hands with a lovely little quote.  Or, it can be viewed and experienced for what it is: a grandfather holding a grandmother's hand at the moment of death.  This was painted from a photograph of a real moment for a real family of a real husband and wife as one comforted the other as they let go of life.

The combination of the painting and the narrative completely change the experience. 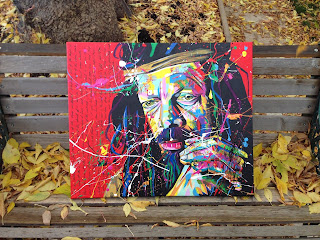 This is a colourful portrait of a guy named Bruno.  If I just left it at that you might like the portrait, colour choices and splatters.  But there is so much more to this painting and the photograph by Mitch Hippsley that inspired it, which I shared in a series of blog posts.

The narrative and the painting were so compelling together that together they sparked thousands of conversations and memories about this homeless man who died over 25 years ago.  It was last fall when I painted the portrait and my son Ben applied the finishing splatters, but even as recently as two days ago a stranger from east-central Saskatchewan reached out to share their memories of this unforgettable fellow. 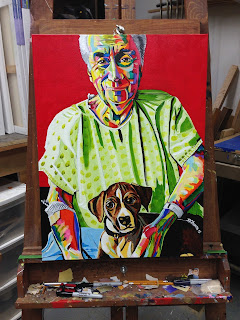 I loved this painting of Mike Paskal when it came off the easel.  I loved it even more when I found out the story behind the moment.

The entire time I was painting Mike I just assumed that the dog on his lap was his.  It wasn't.  His son Mike Jr. has asked him if there was anything special he could do while he was in the hospital battling cancer.

So, Mike went to Facebook and asked if anyone could lend him a puppy for this purpose.  He was deluged with offers and proceeded to smuggle one of the little gaffers into the ward.  The look on Mike's face was priceless.  That moment of holding that puppy and the feeling of his little heart beating stayed with him until the very end, as did the painting. 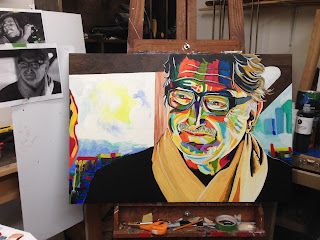 Just a few days ago, my colleague and friend Christopher Davis from Calgary shared the portrait I did of Michael Green on Facebook shortly after his tragic death in a car crash earlier this year.  That portrait was very special to me as it was, and is, to many others.  It was inspired by a moment of beauty at an event in the foothills south of Calgary as the sun was setting.  Michael was in this amazing light and I bucked up my courage and asked his permission to take his portrait.

The photo that captured the brilliance of the artist and the humanity of the man was the first frame of many that I shot on that glorious evening.  The image ended up being the main one that was used as a large community of artists mourned his passing.  The painting provided the masthead for Michael's obituary in The Globe and Mail.

A former McMurray resident shared a story recently with me.  Nick was on tour with the production of Chelsea Hotel which played at Keyano Theatre last weekend.  He was dining with one of the actors somewhere on the road when he noticed the bookmark inside the pages of the novel the guy was reading. 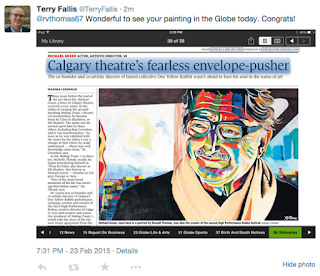 He picked up the bookmark and discovered that it was a clipping of the portrait of Michael Green from The Globe and Mail.

The stories of the paintings with good narratives keep on going.  It is a delight and honour to have played a small role in sparking conversations, reflections, memories, warm feelings and unforgettable stories through my time spent in the studio with my brushes, paints and easel.
Email Post