Sleeping in the tropics

We began our long trip back to Kamsack, Saskatchewan for Christmas yesterday.  We left late morning, drove all day, and arrived in Meadow Lake, SK at about 7 pm (CST).  It was a miraculous day for driving, clear and mild, and traffic was light.  We couldn't have had better conditions.

As we settled into our room in the local Super 8, we all began to realize how blessed hot it was in the room.  We had to go by our instincts as there was no thermostat on the wall to confirm our inclinations to stay on top of the covers.  Ben and I, each in our turn, tried to adjust the heater/air conditioner attached to the outside wall, but with no luck.  The chinook inside that room was determined to stick around.

"I'm going to prop open the outside door for a bit," I said.

This was one of those hotel/motel rooms that had two exit doors; one to the hallway and one to the parking lot outside.  I choose the latter and opened it about four inches, thinking the -20 degree air outside would rush in and give us some relief from the stifling heat wave.

Now, when a door is not quite closed at our house in Fort McMurray, we feel it almost instantly.  A draft comes through that runs right up your back and gives one helluva chill.  When the door is actually opened, it becomes an instant ice age.  Not so in this hotel room in Meadow Lake.

I had that door propped open for the better part of 20 minutes and I was still on top of the covers by the end of it.

Not the most scientifically minded person, I tried to wrap my brain around why the outside cold air wasn't able to supplant the sub-tropical air inside the room in a matter of minutes.  I'm still befuddled. 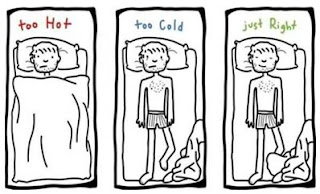 I was getting rather sleepy, so I acquiesced to the fact that I had lowered the temperature in the room enough, and rather than risking falling asleep and leaving it open all night long, I closed it up and crawled under the covers.  Even then it was too hot, and I was forced to toss the blankets aside, just leaving my feet covered. Without running any heat all night, the room was perfectly chill by the time we got up.

Thankfully, we are heading to my father's house, where keeping the house cool at night has been happening since the early 1960s.
Email Post