It's time to write a blog post that has absolutely nothing to do with fire, evacuation or recovery.

A friend and colleague from the U.S. suggested that I might be entering the "inanimate object" phase of my painting journey.  He made the comment after seeing the recent study I did of a champagne bottle.  What he couldn't possibly know is that I was practicing for a live painting gig that I have coming up tonight at Cavern in Edmonton.  A company called Charton-Hobbs Inc. is launching a new product, and I am going to apply my style to their product.

I've been intrigued for some time in the idea of treating buildings or objects in the same way that I do human or animal subjects.  What are the qualities that give an inanimate object its uniqueness?  Shape, line, contrast, light and myriad small details combine to reveal its personality.  At least, that's the theory.

While in Calgary, we did a little workshop using a regular rundown farm house as a subject.  The results from the three artists was fascinating.  Each expressed the same structure, but in a completely different voice. 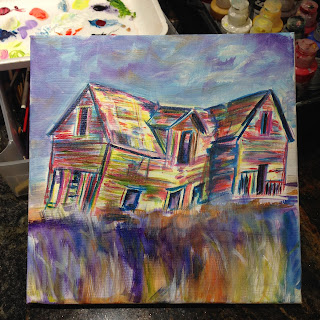 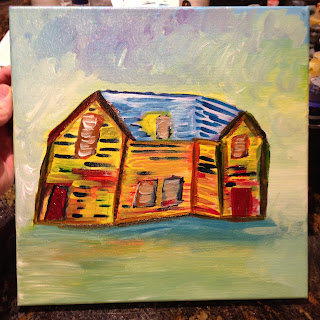 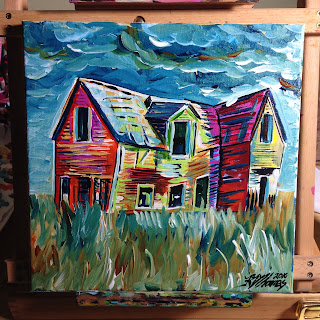 I'll have a 4 or 5 hour drive ahead of me today as I once again travel down Highway 63 to Edmonton - the second time this week.  I'll be playing with the composition in my head the whole time, whether consciously or unconsciously.   Once I get set up in Cavern and the people start to show up, the piece will begin to be influenced by the sounds, movement, and energy of the space.  It's somewhat exciting to NOT know what will happen with the painting.  It will be given away as a door prize at the event.

I took a wee break from the objects last night, starting a new commission of a person.  It was like reacquainting myself with an old friend.

The point of all of this is that I'm not afraid to try something new, a little off the path, so to speak.  Each deviation from the norm has helped me grow as an artist.  It has also opened up new markets.  People who may have little interest in wild colour portraits might be very drawn to a colourful painting of an old prairie farm house.