What would Jim and Eric do?

As municipal council faced an overflowing crowd during their first meeting back in the community following the wildfire, I was three blocks away in my studio, completing a portrait that was started just a few day before the evacuation.  I'm very interested in what council decides to do and how they perform under incredible pressure, but I was happy to watch the replay and catch snippets of what happened on Twitter and Facebook. 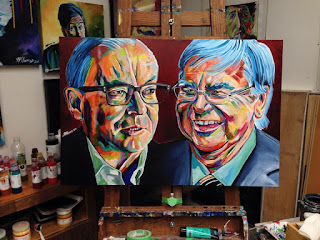 Jim Carter and Eric Newell were leaders of Syncrude during the time when I first arrived in the community and for the first 5 to 7 years of my residency here.  If you arrived after 2005, you might not recognize the names.  If you are a long-time resident of Fort McMurray, you likely not only recognize them, you probably would walk up to them and say hello if you saw them.  They were dedicated community guys.  They each raised families here, were involved in the community as volunteers, and were deeply connected to other government, business and industry leaders.

A colleague at work asked a pretty good question yesterday.  What would Jim and Eric have done if this fire had happened when they were here?  They were instrumental during a number of pivotal moments in our history, and in the creation and development of some of the things we take completely for granted many years later.

Eric was very involved behind the scenes in the formation of our municipality.  Jim was instrumental in the redevelopment of Vista Ridge.  In fact, he was among the community leaders at the very first public meeting I attended when I arrived in 1996, working at 1230 CJOK.

Jim and Eric were not only "get 'er done" kind of guys, they also understood the rhythms of this community, its strengths and challenges, and brought a thoughtful and authentic approach to leadership and decision making.  They also looked you in the eye and called you by name.

Fort McMurray and the industry that sustains us, are very different today.  There are more people, more companies, and more leaders who spend more time in the head office than they do in our community. We have been dealt a major blow and community leaders, specifically elected municipal officials, are in the unenviable position of having to set policies and direction to make it all better.  It's not an easy thing to do, especially given the interpersonal dynamics that exist within the group.