We had visions of long lines of vehicles trying to get into the city of Fort McMurray, crawling traffic and a re-entry process that was going to require a good dose of patience.  As we turned on to Highway 63 to complete the last leg of the journey home, though Boyle, Grassland and Wandering River, it became evident that we had either timed it right, or that a lot of people chose to stay away a little longer.

The trip home turned out to be the lightest traffic we've ever experienced.  The process of going through the welcome centre at Composite High School was smooth and swift.  We used the washroom, connected with Atco Gas, met with a Red Cross agent, picked up cleaning supplies and water, and were on our way home in under 15 minutes.

Responding to media requests has been a big part of this evacuation experience for me, through the initial escape, with the launch of the www.unitedforfortmcmurray.ca campaign, and after the painting of Fire Chief Darby Allen.  Heather got a dose of what that was like yesterday on the drive up to Fort McMurray.  She spent several hours on the phone with reporters from the Toronto Star, New York Times, USA Today, and various other outlets.  It was great to listen to her handle herself with skill and authenticity.

Metro News interviewed us over the phone when we were still in Calgary and had a photographer snap a picture of us with our loaded Ford Escape.  They were also in Fort McMurray to capture the moment as we turned the key and walked back into our home for the first time in 29 days.

It was great to see Norm, Sheila and Tim Sutton, our long-time neighbours, who had arrived several hours earlier.  We did a quick catch up before walking up our steps, turning the key and stepping in.

The smell was......pleasantly nice.  While a light acrid smell permeates everything in the community, the overall air quality in our home was excellent. As we reacted to being in the space, we just grabbed each other and held on.

I couldn't resist heading out to the studio to open it up and see the canvases left behind.  It was a great feeling to be in there again for the first time in what seemed like forever. 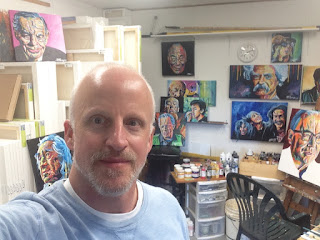 We took a trip down into the basement to check out the last great unknown.  Our younger son had put a load of laundry in the washing machine just prior to the mandatory evacuation.  I opened up the front loading washer and took one whiff.

"Not bad," I said, pleasantly surprised.

I took a second whiff.

The smell of mildew was pretty powerful and that collection of clothing went straight from the washer into a heavy duty garbage bag.  (Sorry Ben!) 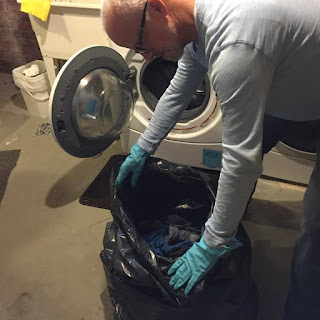 We sat and chatted for awhile with Alex, the reporter, and Kevin, the photographer.  In a strange sense, it forced us to process a lot of things in a short period of time. 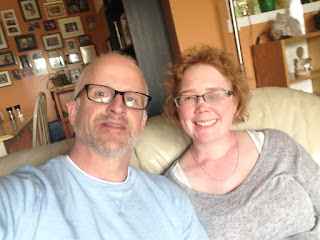 Several good friends popped by to visit, including Taylor and Kelsey.  It was great to see them again and make several steps forward toward being able to feel normal again.

Our brother-in-law also dropped by to say hello.  He's been in Fort McMurray through much of this disaster as he works in Emergency Management.  We owe a debt of thanks to Chris as he emptied our fridge of the stuff that was going bad early in the evacuation period.

We went on a little driving tour to get a sense of the devastation and the way "The Beast" moved through the community.  The scale of what has happened is so hard to fully fathom.  However, seeing blackened forest to the south, west, north and east of the community reminds me of the heroic efforts and strategic decisions that were mind under harrowing conditions to save our community.

I've stated several times in several different ways that we are among the lucky ones.  Yesterday was a hard day for folks watching social media who have lost everything, or who are several months away from being able to begin the recovery process.  I am joyful of our situation, but mindful of thousands of others who are hurting deeply having suffered a horrific loss.

We are home to stay, though we'll make one trip out to collect our sons and bring them back.  We wanted to make sure that the air quality was good and that supplies were plentiful before restoring the family unit.  Today, neighbours in Timberlea will begin their re-entry process, residents of Thickwood will follow tomorrow.

I'm grateful and I'm hopeful.  We are here and we are strong - #ymmstrong.