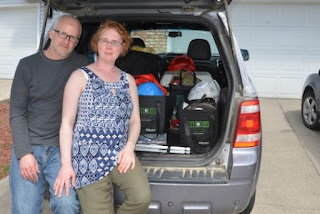 Heather and I had made the decision to return home first, to assess things and begin the cleaning process.  As it turns out, we didn't have room for the boys anyway in that initial trip.  The combination of art supplies, groceries, extra water and gas left absolutely no space for extra bodies.  However, after three or four days of being in our own home, and with the boil water advisory lifted, it felt like the right time to bring them back.  They were longing to come home.

We considered a couple of different options of getting them back to Fort McMurray.  Apparently, the Canadian Red Cross is offering free shuttles back to the community, but there was no certainty as to when that would be.  Red Arrow had a bus service that was running, but nothing direct from Calgary.  In the end, we asked Heather's parents to drive them up to Edmonton; I drove down to meet them yesterday morning.

It is rare that I do 9 hours of driving in a single day, but the imperative to get Dylan and Ben home outweighed the fatigue of being at the wheel for that many hours in a row.  The hour lunch break at the rendezvous helped break things up.

Once again, the traffic coming up was very reasonable.  It certainly wasn't as quiet as it was on the first day of re-entry, but it didn't come close to the gridlock conditions that we feared.  I observed many trucks heading north, loaded with suitcases, jerry cans, and the odd fridge.

Our area of downtown already feels close to normal.  The majority of our neighbours are back, the lawns have been trimmed, and the appliances that had been placed at the curb have been picked up by the municipality.

I wanted Dylan and Ben to have a good homecoming, so I made their beds, straightened up their rooms, and did a couple of loads of laundry.  Heather did an enormous amount of work in the kitchen, study and yoga studio space downstairs.  In fact, she managed to lead a yoga class for a few ladies last night - she is keen to use her skills to help others re-establish their balance.

"Let's get a family picture," I said to Heather.  "Let's close this thing out."

33 days earlier, we has separated three different ways:  I was sheltered in the south at the Mark Amy Treatment Centre, Dylan was in Fort McKay, and Heather and Ben were at the Barge Landing Camp.  What seemed like it was going to be a perfectly normal day in Fort McMurray turned into something very different. 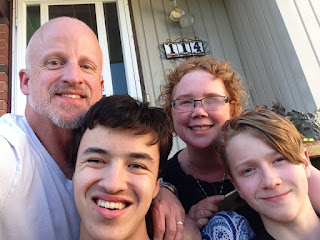 We are grateful to be home.  We are mindful of so many others who can't go home, or who have no home to go back to.

We owe a debt of thanks to Darby Allen, Dale Benfeld, Chris Graham, Bob Couture, and their team of amazing men and women who saved us and saved our community.  We are grateful to all the local elected officials who were placed in the untenable position of ensuring the continuation of local government while dealing, in some cases, with catastrophic personal losses and displaced families.  We are grateful to the provincial government under the leadership of Rachel Notley for their heartfelt handling of a dire situation. We are grateful to Prime Minister Justin Trudeau and the Government of Canada for stepping up and offering support in so many ways.  His speech from Fort McMurray made me weep at wheel as I listened on the radio down in Calgary, one of the many moments of emotional release during these unforgettable days. 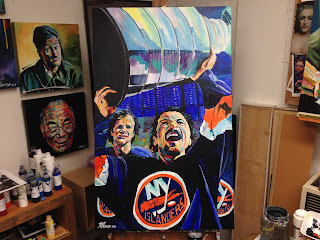 I sent hockey legend Bryan Trottier a quick note to let him know that I was finally able to put the finishing touches on his portrait that I had done live at the 2016 Alzheimer's Face Off on April 29th. His reply was profound, as he shared a Latin phrase he learned from his daughter, a language major. 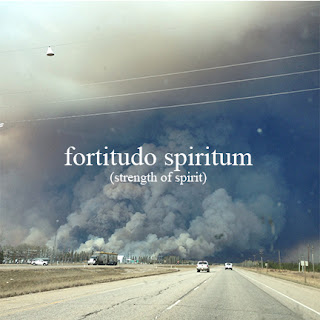 "I hope these words give meaning to those of you who have the strength and spirit as you move forward from the Fort Mac fires," he wrote.