Painting at the Garden Party

Each year, Brett Wilson hosts a garden party at his home in southwest Calgary.  He is well known as a Season 3 judge on CBC's Dragon's Den, investment banker, businessman, investor and philanthropist.  It is the last item on his resume that intrigues me most.  The 2016 Garden Party will raise hundreds of thousands of dollars for several worthwhile charities. The focus this year is Adolescent Mental Health.  This is a cause that is near and dear to my heart as my older son has struggled with depression over the years. The United Way of Fort McMurray will also be a recipient of funds from this event.  If you see a tweet or post with the hashtag #OMGP (Oh My Garden Party), retweet it.  You will help raise even more money. 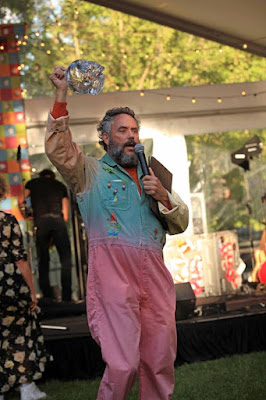 I got an email the other day from Emily, Manager of Brett Handling and Fun (most awesome job title ever) with Prairie Merchant, Brett's company.  She was enquiring to see if I would be able to pop down to Calgary to do a live painting at the event.  Brett had seen me do my thing at The 200 Luncheon a few weeks ago and got to nooddling an idea of how that kind of activity would add some value to his annual philanthropic shin-dig.

I'm not going to say what, or who, I am going to paint, as I'm not sure if it is a surprise or not.  So, I'm going to leave you in suspense.  I promise to tweet and post in a number of different place later this evening.  Watch for the hashtag #OMGP and remember to retweet or repost.  It will help us raise even more money.  I'm not kidding; it really will.

Before each live painting event, I get a little nervous.  A thousand things go through my head in preparation for the three to four hours of intense creating, in this case, surrounded by about 1000 guests.  That feeling is intensified in this instance, as travel is involved.  It will be the first time that I check-in a canvas on a plane.

"Do you get nervous when people are watching you paint?" asked Mike and Lauren when they were in Birdsong Studio on Sunday for a workshop.  It's a question that is asked by a lot of people.  I'm not sure if it is the performer/actor side of my personality, but the answer is no.  In fact, the presence of people actually gives me energy and affects the painting.  When music and atmosphere are added to the mix, it becomes extra fun. 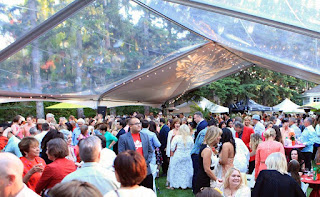 I'll be painting  under a big tent with a clear roof, on some kind of a stage.  That's pretty much all I know at the moment.  I'll figure it out when I get there this afternoon.  I'm looking forward to meeting Brett, his team, and many of his guests.  In case you happen to be there, please don't be afraid to come up and say hello.  Some people hesitate thinking that I don't want to be disturbed.  The exact opposite is the case.  I love it when people come up and ask questions, or just want to chat.  I'm very good at painting and chatting at the same time.