The blessing of falling trees

I rushed to the window to watch one of the big limbs of the Manitoba maple on the corner of our yard fall gracefully and perfectly into the back alley.  Had its trajectory been six inches either way, significant damage to the neighbours fence or garage would have been guaranteed.  This happened on Wednesday, when wind gusts were eclipsing 50 km/hr. 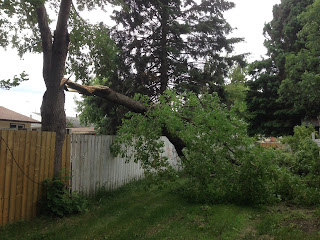 The remaining two limbs, one stretching over our neighbour's yard and the other over the garage of the neighbour across the alley, needed to come down.  I knew that I was looking at hundreds of dollars, first to cut down and remove the large limb that was already down and the remaining two.  I also knew that we'd have firewood for the next few years, after piled up pieces were able to season for a year. 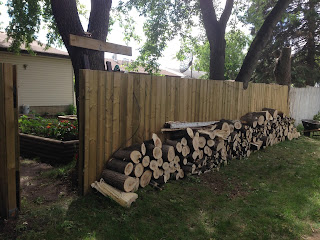 Every cloud has a silver lining.  This cloud had two.

First of all, I got to meet Quintin Adamson.  Suggested by my friend Sean, Quintin showed up early yesterday morning and set to work.  We had a chance to visit with each other throughout the project.  As is the norm in Fort McMurray right now, we shared our evacuation stories and observations about how things have changed.  I also found out that Quintin was quite aware of me, long before getting my text message asking if he could help with the tree.  He and his wife stumbled upon my paintings at North Star Ford and she has been following my work closely ever since.

From South Africa with a passion for mountain climbing, Quintin easily and safely scaled the tree and made quick work of bringing it down.  One piece knocked out a bit of the fence that separates our yard with Norm and Sheila's, but a couple of new 2 by 4's and about an hour of mending fixed it up no problem.

If you're looking for someone to do some tree work, Quintin is a great choice.  His quote was more than reasonable, and the quality and care of his work was excellent.

The other silver lining was getting to meet my neighbour across the alley.  Russell (yes, we share a name) McDonald was standing on his fence watching the proceedings as Quintin cleared the alley of the fallen limb.  A machinist by trade, originally from the Barrie, Ontario area, Russell and his wife are my kind of people.  They enjoy art, music, movies and working with their hands.  In fact, he said that his wife has a little studio in their house and that she also loves to play music.

Russell shared how much they used to enjoy when they "shut down Franklin to have that arts festival".

"It was the coolest thing," he said.

He had no idea of my connection to interPLAY, but hearing his comment made me pine for the visual and performing arts festival that was an integral part of Fort McMurray summers for 20 years.  It also made me think of all the people who breathed life into it:  Alan, Claude, Norm, Christina, Eugene, Earl, Angela, Greg, Brad, and hundreds of others.

"One of the things this fire has done has brought the neighbours out," he said.

He is absolutely right.  I have had several great conversations with neighbours that have been phenomenal, including the one with him yesterday.