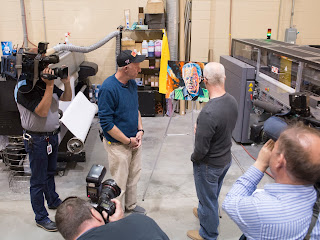 Later this morning, I will be reuniting with Fire Chief Darby Allen and talking about the events of the past two months, live on the air on KAOS 91.1.  We haven't seen each other since May 17th, when he came to Run Digital Inc. in Calgary to see his portrait in person. In some ways, it feels like closing the loop.  I was interviewing Stephen Bryant from the Centre of Hope on that fateful day.  We both left the station, located at Composite High School, with smiles on our faces, having enjoyed a delightful visit on IMPACT, a weekly interview show that I host as part of my role with United Way, in collaboration with FuseSocial and KAOS.

The day was bright and sunny.  The sky was blue.  And from the vantage point of the high school, not a puff of smoke could be seen.  I've seen many people comment that the evacuation should have been called earlier.  Now imagine, if you will, being told you had to pack up three days of supplies and head out of town in those conditions.  You would have that officials were losing their minds.  Though, at that moment, officials knew and said "not to get lulled into sense of complacency".

I'm going to ask Darby about that morning and his recollection of what happened in the harrowing hours that followed as the winds and fire picked up shortly after lunch.  It is unfathomable to imagine the speed and ferocity of the flames that whipped up and where best to apply resources.  The heroic efforts of the first responders, who worked tirelessly in conditions of extreme danger and uncertainty, will never be forgotten.  It will be sobering to hear the Chief talk about the men and women of his department and the sacrifices they made to save lives and property.

In the days that followed May 3rd, Darby Allen became the face of the disaster.  His short video messages at the end of each day were watched by tens of thousands.  For so many of us, scattered across the province and country, they became lifelines and an emotional connection to what was happening back home.  Who came up with the brilliant idea of communicating in this way?  I wonder how Darby felt about getting in front of a camera at the end of intensely long days and putting together a cogent message.  I wonder if he realized how effective and important those short videos ended up being.

At some point in this crisis, Darby went from being Fire Chief to Director of Emergency Management.  When that happened, he had a team of 50-some people at REOC (Regional Emergency Operations Centre) who were relying on him for leadership.  Who did he rely on?  How did he get through one of the biggest disasters in Canadian history?  What were his highs and lows?  What lessons did he take away from this unparalleled response?

Now that we are almost two months out from the fire and the mandatory evacuation, reports are being drafted and presented, the inevitable second-guessing of decisions that were made during the crisis are in full bloom, and the real weight of this event is being felt by thousands, especially those families who lost their homes, or who have homes that they can't go back to yet.  What is this phase like for the man that was in charge of taming "The Beast"?

There are so many questions and possible lines of dialogue that it is going to be difficult to decide what avenues to take when we start IMPACT at 10:30 am.  However, knowing Darby, as I do, it will end up being an effortless and intriguing conversation.

If you feel strongly about the role that Darby played and you had a chance to express your appreciation, what would you say?  Perhaps I'll end the show with a few messages of gratitude from people who were inexorably touched by the words and actions of Darby Allen and his amazing team of first responders.