Fort Mac is back

Heather and I returned to Fort McMurray one week ago in the first wave of the staged re-entry.  It was super quiet, with an after-the-apocalypse feel.  Following the first night of sleeping in our own bed, I got up and went for a walk in our neighbourhood and down Franklin Avenue.  I even collected my free hug from Matt at MIX 103.7. 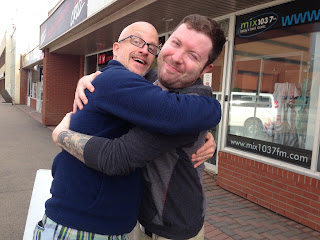 As the days passed, more and more people started to return, and the tell-tale signs of normal community life started to appear:  multiple vehicles stopped at intersections, line-ups in the grocery store, and most of the houses in our neighbourhood occupied, or at least entered. 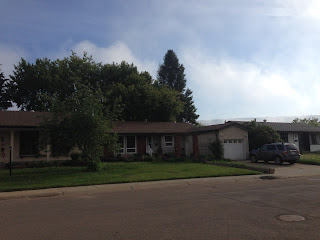 Lawns were overgrown and overcome with dandelions one week ago.  Today, most of the grass has been trimmed,  With the long days, warm temperatures, and scattered showers, many lawns have been cut a second time since we've been back; mine included.

Seeing friends and colleagues, we heard new stories of both the evacuation and the re-entry.  Watching social media, we read about other things happening during this recovery period.  There are literally thousands of harrowing and heartbreaking stories of escape, perseverance, dramatic emotional swings, returns, pleasant surprises and disappointing confirmations of devastation. 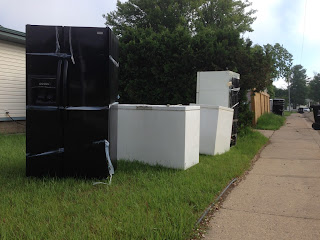 Many people are choosing to duct tape up their appliances and hoist them out to the curb, even in neighbourhoods where the power stayed on the entire time.  Other people are apparently either attempting to buy the soiled fridges and freezers, or outright take them.  The scuttlebutt is that they ship them down to one of the major centres, clean them out, refurbish them, and then put them up for sale.  If you suspect this is happening in your neighbourhood, you're encouraged to report it to the police.

The stories of what is happening inside homes varies.  Some, like ours, are getting a general clean (done by ourselves) and are good to go.  Some are being professionally cleaned.  Still others are being forensically restored, complete with total removal and cleaning of contents, hazmat suits, and respirators.   On the continuum of what will happen inside the four walls of the thousands of homes that are still intact, there will be hundreds of examples stretching from one end of the spectrum to the other depending on the level of smoke and water damage, residual smoke smell, insurance coverage, availability of contractors, and myriad other factors.

I've heard more amazing tales of what happened to people on May 3rd.  It strikes me that when the adrenalin kicks in, and the situation demands, people become extraordinary.  I think of what Heather, Dylan and Ben did in those crazy minutes before the mandatory evacuation was called and I'm blown away.  Our house is in really great shape because of decisions they made and actions they took under incredible duress.

Late yesterday afternoon, a fellow artist needed a ride to go to the car lot by the water treatment plant to recover her parents' vehicle which had been abandoned during the fiery exodus.  I had some time to kill, so I offered to help.  That drive from downtown to Timberlea and back felt as close to normal as I'd felt in the week we've been back.  Traffic was busy.  People were out running.  A few people were playing tennis.  Families were on the trails going for walks.  It really felt that Fort Mac is back.