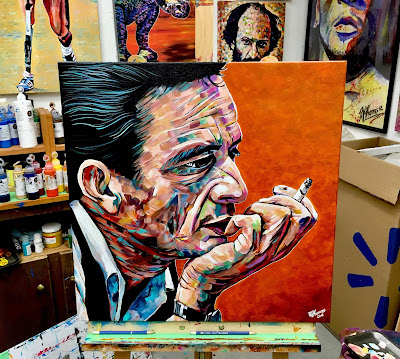 Johnny Cash is one of the most beloved music artists of all time.  His songs cut through the noise and get our toes tapping almost instantly.  I ended up painting two portraits of the man in black this week.  The first was of a younger Johnny, on the ascendency of a career that would span over 50 years and include sales of over 90 million records.  The second was an iconic moment of reflection near the end of his life. 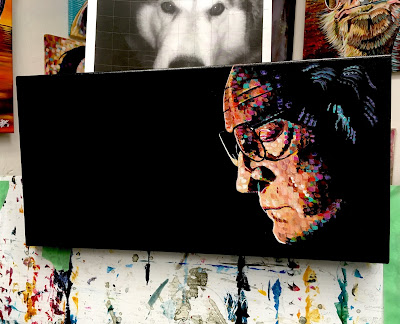 The younger portrait inspired thoughts of songs like "Ring of Fire", "Man in Black" and "Sunday Morning Coming Down".  The older one took people to the song that closed out his career, a song that is seared into our memories: "Hurt".

Johnny had a long and tumultuous life.  He lived life large and had lots of things on his mind as he faced his mortality.  At least that's what the words of "Hurt" would suggest.

He was a christian and had a deep and abiding relationship with God. I'm certain that relationship was on his heart as his body began to fail him back in 2003.

The things that have always been important: to be a good man, to try to live my life the way God would have me, to turn it over to Him that His will might be worked in my life, to do my work without looking back, to give it all I've got, and to take pride in my work as an honest performer. 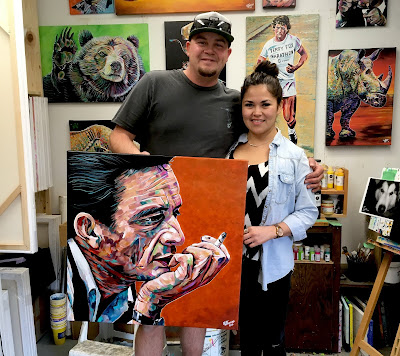 Bobby picked up "Johnny Cash - the Man in Black" the other day.  It will join the knife painting I did of Waylon Jennings earlier this year.  I was trying to recall a story I had heard about Johnny on Mike Rowe's storytelling podcast called "The Way I Heard It", but was unsuccessful in the moment.  I've since done some digging and discovered the little known nugget about the beloved country singer.  During the Korean War, he was in the US Air Force, serving as a morse code operator in Germany, intercepting Russian radio transmissions.  He was the first American to find out about the death of Josef Stalin.  He knew about the death of the dictator before President Eisenhower.  You can read about it by clicking here.
Email Post