It was a fun and intense weekend of doing live paintings down in Edmonton.  It was a rare opportunity to sync up two different opportunities into one trip down south.  With the price of gas being so high and time being so precious, it was great to maximize my time in the capital. 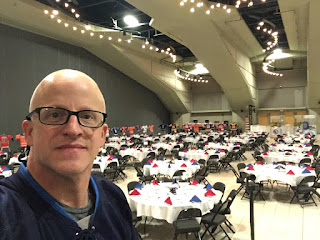 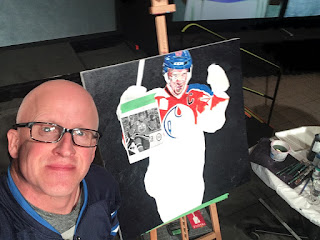 My subject, for the second year in a row, was Oiler's phenom Connor McDavid.  He is certainly the highest profile hockey star of his generation, and there would likely be a strong interest in owning a one-of-a-kind piece of art that was created right in front of you. 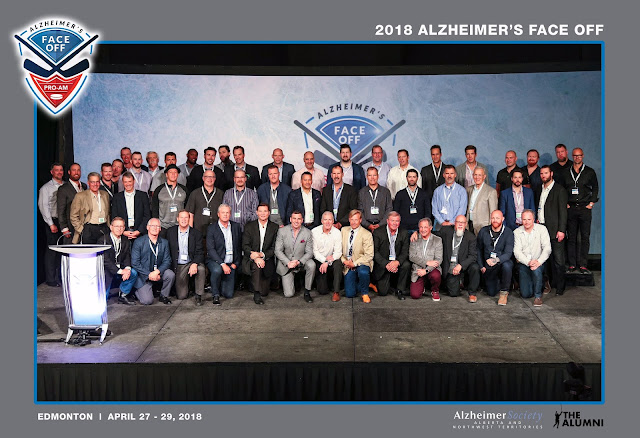 It was the biggest turnout ever for the event: over 65 tables of hockey fans and supporters of the Alzheimer's Society, many of whom were playing in the charity hockey tournament throughout the weekend.  It was announced that the weekend full of activities and hockey would raise over $1.2 million for Alzheimer's research, support and education. 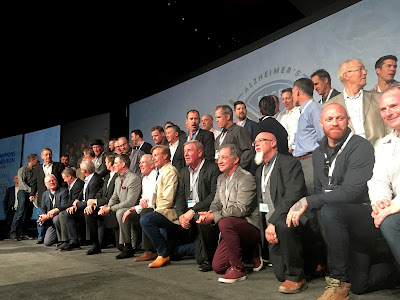 There were lots of NHL alums in the room.  Just before they auctioned off my painting, they all came on the stage for the traditional group picture.  While I enjoy hockey and was a huge fan as a young guy, I have not kept up over the years.  I only knew a few of the players I have met at previous events.  I took my iphone, reached down under my canvas, and snapped the players that we gathering about 15 feet to my left. 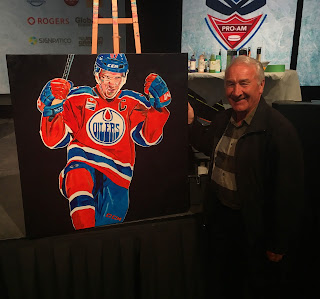 The emcee, Jason Gregor from TSN, did a great job getting the bids going.  The painting eventually sold for $10,000 to Tony Deford from Deford Contracting in Edmonton. He's the same lovely fellow who donated $18,000 last year for the Connor McDavid painting I did last year at the same event.

I faded from the stage, Jason brought up his NHL stars and began the hot stove.

The key to getting the painting done in time for the auction was to methodically work my way around the canvas, getting several layers of paint down.  From a distance, the painting reads like it is largely complete, even though I know it will need some love back in the studio.  In the case of this event, I had the right amount of time and felt very comfortable with the progress that I had made by the time Jason took over and found a buyer.

I had quite a bit of time between the Alzheimer's Face-Off and the next event the following day, the annual Hard Hat Party being put on by the Interior Designers of Alberta.  While nice to have, the luxury of time ended up make me feel rather discombobulated more than anything else.  Normally, my painting excursions are Go! Go! Go! and leave no time for overthinking.  I went for a couple of walks, visited with some friends, and sketched out my subject on to the 36" x 36" canvas.  I even had time for a couple of naps, which always helps to calm my nerves. 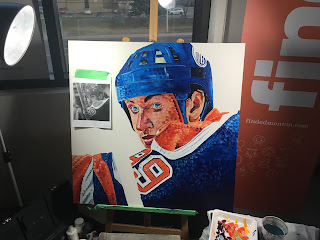 The Hard Hat Party was a completely different kind of event.  It was held in an undeveloped commercial space above the new TD Bank on 104th avenue, an empty room that in one moment had 8 organizers milling about; in the next there were several hundred.  Once I start in on a project, I lose myself in the process of bringing it to life.


I was literally surrounded by people, similar to the time I painted the Frankenstein monster at Robbie Picard's huge Halloween Bash a couple of years ago.  It was intense in the best possible way, and that intensity wove its way into the painting. 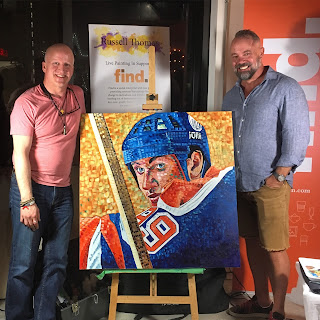 David Law was the successful bidder on the portrait of Wayne Gretzky.  He was pretty excited.  Much like the painting of Connor McDavid done the previous day, this work was largely completed on site, but will need to be cleaned up and completely finished in the studio over the next few days. 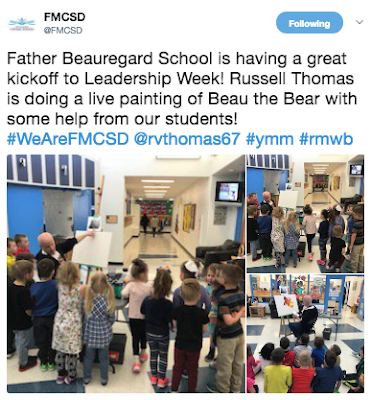 I closed out three frenetic days of live paintings by doing something a little different.  I was a special guest at Father Beauregard School for Leadership Week.  I set up my easel in the middle of the foyer and starting working on a portrait of Beau the Bear, the school mascot.  As I worked, classes would take turns to watch for 15 to 20 minutes at a time.  As I painted and they watched, I talked about the process, told stories and answered questions.  They had lots of great ones.  I found myself talking about the kind of brushes that I use (1/2" angle brush is the one I use the most), my favourite colour (Phthalo Turquoise), and even whether or not I have a personal favourite of the 828 (that is the actual number - I didn't know for sure when they asked that particular question) that I have done.  For the record, I don't have one favourite.  There would probably be about 100 that I could confidently put on that list.

The students and staff of Father Beauregard School have been through so much.  Located in the Abasand neighbourhood that lay in the path of the fire that ravaged Fort McMurray in 2016, they are still rebounding and rebuilding.  They are pretty amazing people and they sure made me feel welcome.  Each of them contributed to this portrait of Beau the Bear that I finished in Birdsong Studio last night.  We will be donating this one to the school so they can share it in perpetuity. 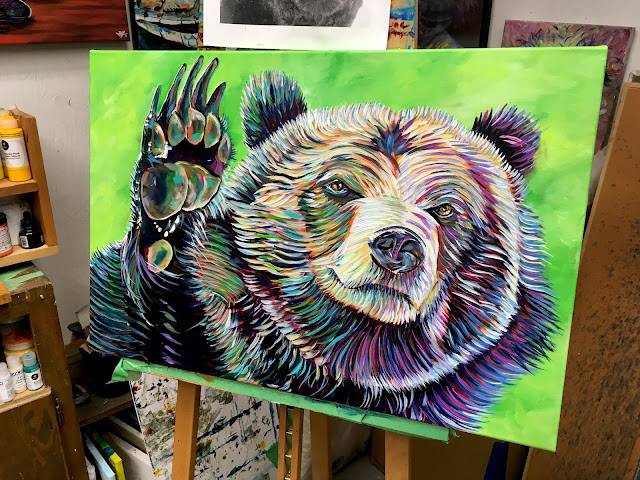