Painting through the heat wave

It is 6:20 am on May 23rd.  We slept through the night with multiple fans running full blast to keep the air moving.  The house is still 26-degrees.  After 19 years of living in this home, we haven't invested (yet) in air conditioning.  I'm not sure if we're frugal or just stubborn; we're likely a little of both.

This heat spell, extraordinary to us, would be benign to those living in southern states like Arizona, Texas or New Mexico.  Temperatures in that part of the world can stay above 40-degrees for days and weeks at a time.

Birdsong Studio heats up throughout the day as the sun makes its big arc northwest.  The mornings are lovely, but by mid-afternoon, the sun hits the studio directly.  By 3 pm, the paint begins to behave differently, making work difficult, similar to how it was painting in the middle of a hot and dusty village in Cambodia.

I woke up the other morning, intent on beating the heat and doing something a little different.  l set up my iPhone on a tripod and did a time lapse recording of my early morning dance with Andy Warhol.  I forced myself to keep moving forward, despite the rising temperature and my growing thirst; my coffee ran out about the one hour mark. 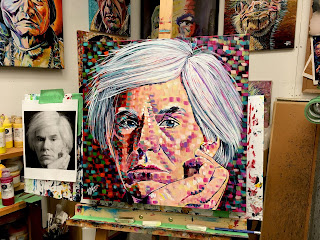 Olivia, Keri-Anne and I painted a baby bison during a workshop later that day. 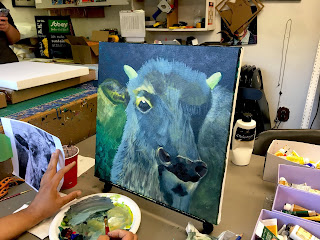 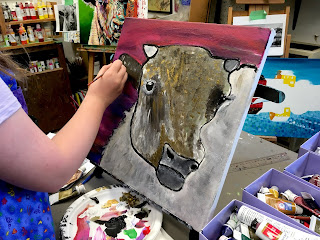 They survived and thrived in the sub-tropical confines of Birdsong Studio.  I went out and finished my piece later on that evening. 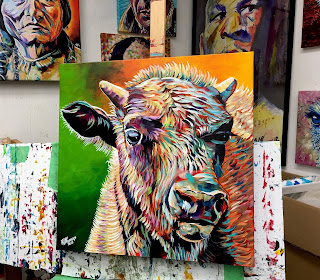 What a difference a few degrees makes.  As soon as the sun relents and begins its march toward the distant horizon, Birdsong Studio begins to feel more comfortable.

I spent holiday Monday doing a long awaited portrait of American poet Emily Dickinson.  Suggested many times by a friend of mine, I thought it would be nice to bring this extraordinary writer to life. 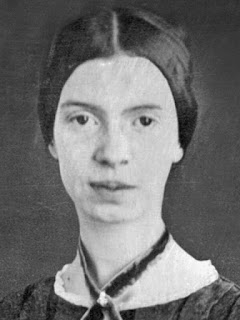 The 19th Century photograph provided little in the way of facial details, but it gave me enough.  It's surprising how I can see so much in so little.  Staring at low resolution black and white photographs for hours each day enables me to notice small nuances that others might not notice. 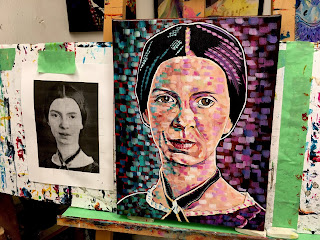 What am I doing to battle the unseasonably hot conditions?  First of all, I drink a copious amount of water.  I probably go through 8 to 10 glasses a day.  Second, I'm napping more often.  A short two minute lay down does a world of good for my energy level.  Third, I'm trying to make healthy food choices.
Email Post