As I walk along the streets of San Miguel de Allende, I keep my eyes peeled for hummingbirds. You see most families have rooftop gardens with colourful flowers, They often supplement those amazing displays with hummingbird feeders. We have seen a lot, but usually they are too far away to get a decent photo and often they are in the wrong position to get a good view of their colours. That all changed yesterday. 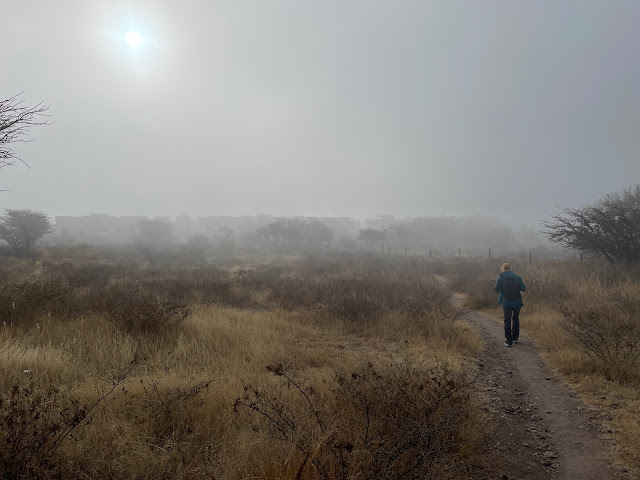 I was walking back downtown after walking with Heather to the cafe where she was working on her memoir with her editor when I stopped to sit on a park bench at a panoramic viewpoint. I had my morning cappuccino in hand and was enjoying the quiet of the morning when a hummingbird appeared right in front of me, sucking the sweet nectar out of a tiny flower bud on the rib of this enormous cactus. It was not more than 8 feet in front of me. I was literally in the best position possible to get a good shot. I shot a number of frames but only one was pretty good.

My plan is to go back to that same spot this morning, perhaps to take a different route to get there to shake things up.

I stopped into Roberto’s gallery to say hello. He was finishing a large portrait of a Mexican model dressed up for one of their traditional days here in Mexico. It was good to see him and to be surrounded by his work once again.

My next stop was at the Ted Davis Galleria. I ended up having a wonderful half hour conversation with Ted about a bunch of different topics. I learned that he has been a photographer since the 1980s but that he had a previous life as a working actor in L.A.  For two decades he took photos at weddings, bar mitzvahs, and special events, anything that helped pay the bills between acting gigs. 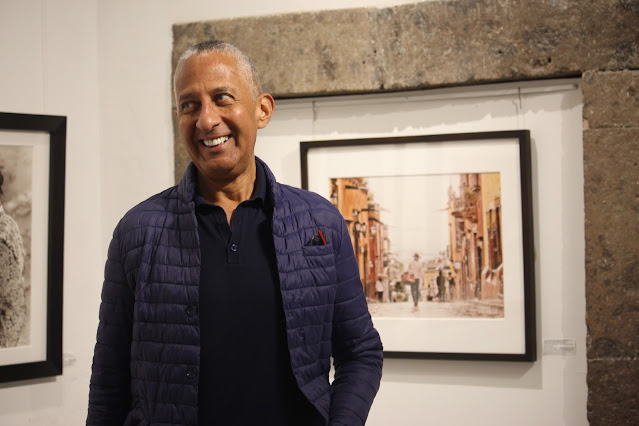 “I love to tell stories with my pictures,” he said. “It’s like my frame is my proscenium or television screen. Within that frame, it is my job to create a narrative.”

He does it so well.  I’ve met and worked with many photographers over the years. Some are incredibly focused on the technical part of their craft and produce interesting photographs, Others have this uncanny ability to capture a moment, an emotion, a feeling. Ted feels that is acting background gives him a special intuitive sense that imbues itself in his work.

“Did you ever act in something that I might recognize you in?” I asked. 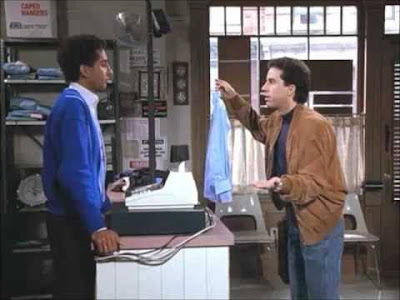 “I would have to say my appearance on Seinfeld,” he said. “I was the laundromat guy who shrunk Jerry’s shirt.”

Sure enough, when I was back at the house I looked up that episode and found it immediately. 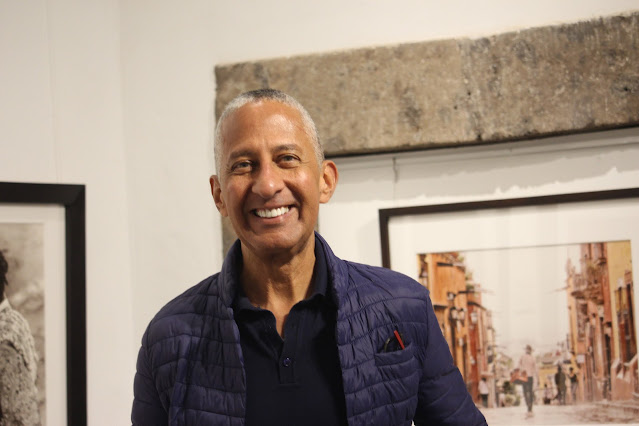 Some 30 years along and Ted David is a world renowned photographer with one of the best galleries in San Miguel. He is also a humble and warm human being who gave me his full attention both times we visited. I can’t thank him enough.

I spent much of my walking time trying to find this one gallery that we had been in last week. It was filled with landscape paintings of local scenes that both Heather and I admired. I still haven’t found it. However, I did stumble across Ricardo Ortiz’s gallery and studio. He was working on a small canvas alongside a student. 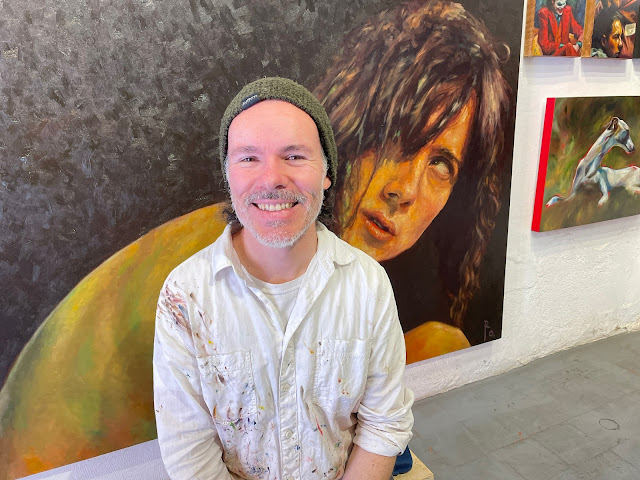 While our work is very different in terms of style, it could be fair to think of him as the Russell Thomas of San Miguel.  Can you see why I say that? 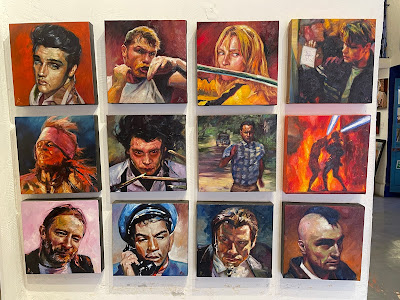 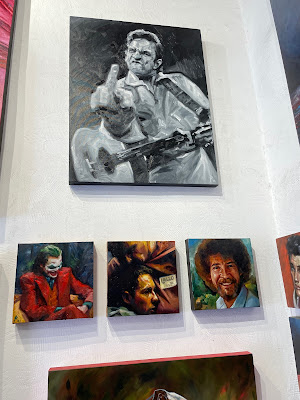 I’ve been searching for inspirations for things that I can explore when we get back to the studio at the end of the month. 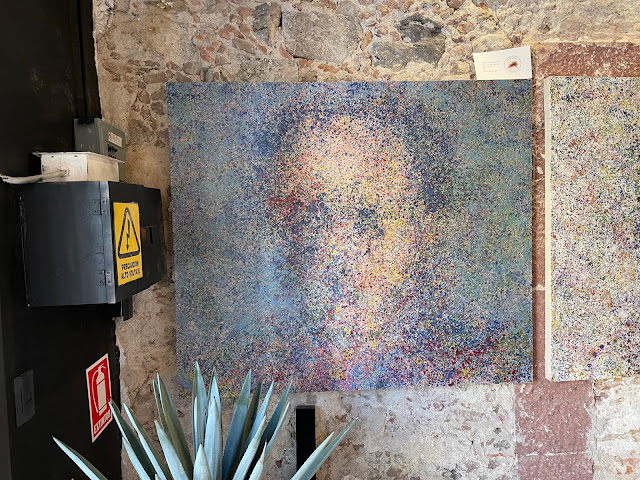 Here is an example of something that might be fun. This is a pointillism portrait. In the studio, where the lighting wasn’t great, the person is barely discernible. But through the iPhone lens, it pops immediately. 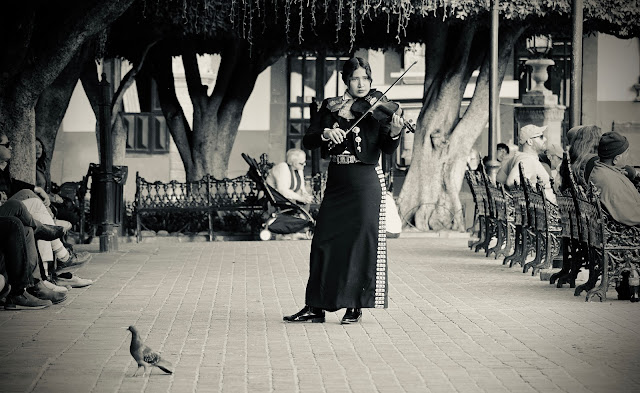 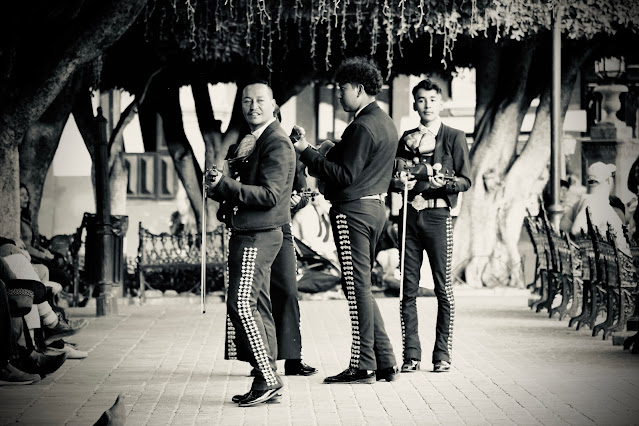 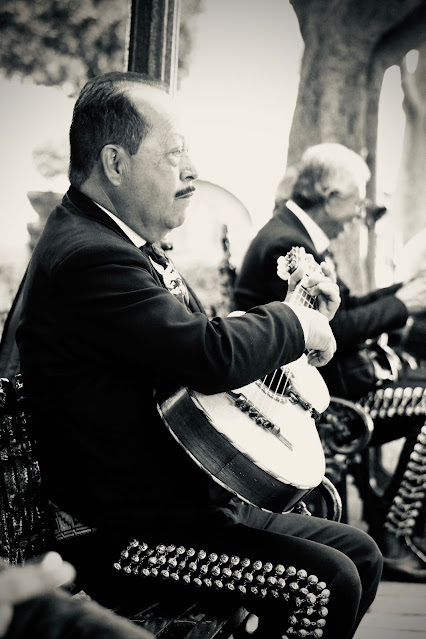 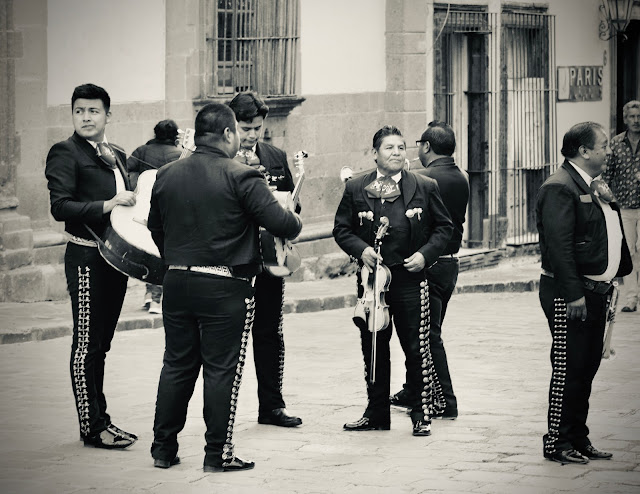 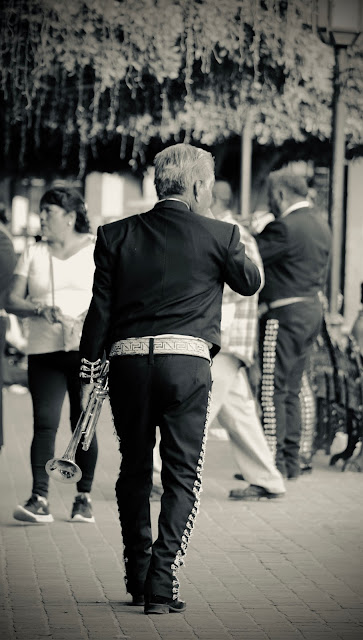 I met Heather down in the main square after her long day of working. She was exhausted, so we happily sat there and watched as the musician got ready for a cultural celebration that is happening this week honouring the community’s namesake. 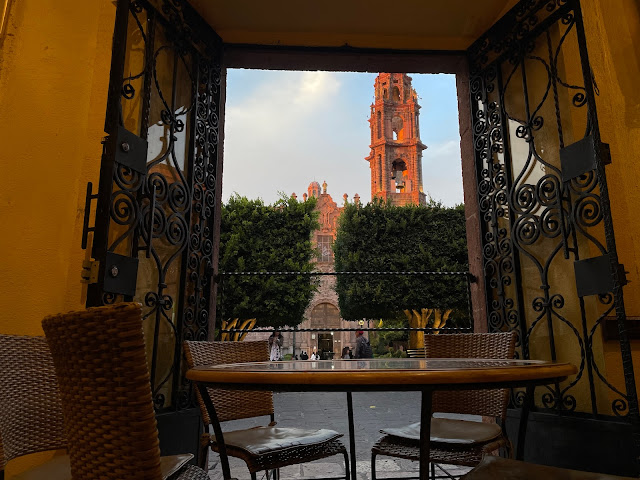 We ate in a restaurant owned by a famous Argentine actress who is hugely popular in Mexico, Margarita Gralia. One wall is full of press clippings featuring her accomplishments. As Mexican tourists walk by the open door, they stop, get excited, and grab their cameras. She is a huge star in this part of the world. 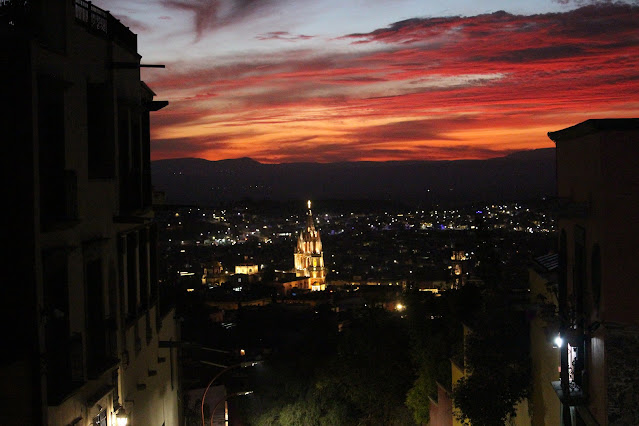 With a few clouds in the sky, our sunset view was pretty spectacular.