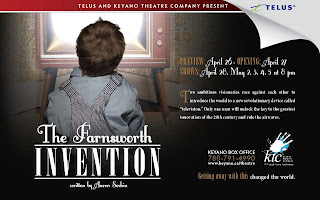 We slammed through the play this afternoon, using a sparse collection of chairs, makeshift tables, and a whole bunch of scrap paper for the stock market scene that begins act two.  Many of the actual furniture pieces were being painted by set designer Jennifer Goodman, recently arrived from Stratford, Ontario where she works as a designer's assistant with that community's famous Shakespeare Festival.  In the original schedule we were supposed to be dark today, but airline issues forced some last minute changes, which required some flexibility on the part of the ensemble in having to make due with whatever could be found to facilitate the run through.

Just days away from our move from the rehearsal hall to the main stage, the 21-member cast did a costume parade, showing off an impressive collection of suits, dresses, overcoats, and hats to the director.  Tiffany Bishop, the costume designer, had spent much of the previous day putting the finishing touches on this impressive volume of clothes and accessories.  I'm one of the lucky ones, with only one minor costume change, but many of my colleagues in the show will be flying in and out of multiple outfits in the muted-blue environs of the wings.

In a process that began with a concerted effort on my part to put faces to names, everyone now seems very familiar.  Over the last few weeks, I've come to discover a richness of character and a bevy of surprises in this ensemble.  Among us are talented piano players, a computer geek who built his first system while still in single digits, a film actor who has worked with Corbin Bernsen, multiple dancers, and former Alberta farm kid who is doing a stunning job playing the Idaho farm boy that is the play's namesake.

Apart from the natural camaraderie that develops as we're rehearsing, one of the bonding activities that has been a lot of fun is the hackey sack  that we play on breaks.  What begins as a party of two, quickly grows as the circle widens and more join in.  Some are great players, with incredible moves, while others of us are less skilled, and just happy to be accepted for our limited abilities.  There is nothing more exciting or fun than when we end up with a long rally, as that little footbag flies hither and thither.

I had a good run today.  It felt right from beginning to end, as my voice returned to full strength after last week's cold.  I was also able to successfully integrate notes from Claude into the run that took it up a notch.  Now is the time for nuance and digging deeper and deeper into the relationships, intentions, motivations, fears and foibles that will deliver what Mr. Sorkin intended.

Dressing rooms have been assigned and a week from now we will have completed what promises to be a daunting cue to cue.  This production is populated with hundreds of individual actions, both technical and manual, that need to be timed just perfectly to achieve the desired result.

I've often described great theatre productions as being many hearts beating as one.  It's nice to be one of the hearts for a change, an honour.
Email Post