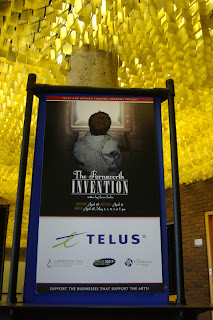 The death toll from the horrific crash on Highway 63 was announced yesterday afternoon.  Six people were confirmed dead after a pick-up truck with three people attempted to pass on a double solid line going up a hill slamming into an oncoming truck with six people.  The ensuing blaze, shared on Twitter and beyond, captured the desperation of the situation - fire extinguishers lay scattered about as passersby tried to douse the flames. 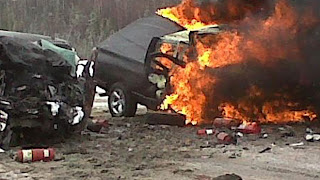 This is what was on my mind as I headed to the theatre for the opening night performance of The Farnsworth Invention.  Based on the overwhelming response to this tragedy, I suspect that a lot of people were trying to wrap their brains around what had just happened and why.  Some were heading home from work; many were just starting their day and getting ready for the night shift.  Thousands took to social media to express their outrage, raw disgust and frustration.

Fellow blogger Theresa Wells wrote an open letter to Premier Redford (a blog post that has gone completely viral, inspiring almost 10,000 views and 100 comments at the time of the writing of this post).

I sat in my dressing room putting on my stage make-up, waiting for our call to go on deck and warm up.  I grabbed a pen and a scrap piece of paper.  The following words hit the page.

We can cry
We can rail


Lives are lost
The moment passed


We can't go back
Make it all better


Do overs are figments
Of imagination, stuff of dreams


Each moment matters
Care for each and every one

Norm Sutton, a neighbor and friend, playing a multitude of roles in The Farnsworth Invention, is also a former emergency responder.  News of the incredible loss of life had hit him hard earlier in the day -horrific memories rushing back.

Despite the tragedy, and the ensuing news that a teenager who had been pulled from the burning wreck had subsequently died, the show had to go on.

In my heart, I silently pledged that this performance would be for those who had died, and for their families and friends burdened with unparalleled grief and loss.

We launched into the show, enjoying a warm and energizing opening night audience.  They laughed in all the right places and helped fuel a run of the show that was among our best.

I knew something had happened half way through the first act, as all the traffic patterns had changed backstage during the wedding proposal.  Michael Beamish, in the lead role of Philo Farnsworth, had collapsed in the middle of his scene - his injured knee giving out.  He kept going with his lines, picked himself up, and hobbled into his next position.  Just a few minutes later, when I was back in my spot on downstage left, his limp was barely perceptible.  The crisis had passed.

They wrapped up his knee during the intermission, his dressing room running over with concerned cast and crew members.

"Give the guy some room to breathe," implored the stage manager as she zoomed by giving us our 15 minute call.

While Mike picked himself up and got into position for the start of act two, I went out into the hall, though the lobby and into place for my entrance from the audience during the stock market scene.

The pulse and intensity continued to build, eventually breaking as Farnsworth and I were left alone to close out the show with a scene that is as much about coming to terms with what had happened in the race to invent television as it is about the choices that were made along the way.

"We were meant to be explorers," said Sarnoff.

It's that word 'protectors' that just kills me.  Did Sarnoff do enough, within his power to protect those who needed protecting: Farnsworth, his son Kenny who died of strep throat, and countless others? No.  And coming to terms with that truth is wrapped in the caves and crevices of that one cathartic word, as I stand in the light, exposed, vulnerable, pierced with emotion bubbling up from the story....and from life, and death.

The answer to the question of whether or not we've done enough to protect the 7 souls who died yesterday is pretty clear to the thousands who are rising up in anger, frustration, and desperation.  Absolutely not.  There needs to be a philosophical imperative embraced by this new government in Alberta to complete the twinning of this vilified piece of road that connects Fort McMurray to the rest of the province.  The time for using the mating habits of caribou, and myriad other barriers as excuses is over.
Email Post