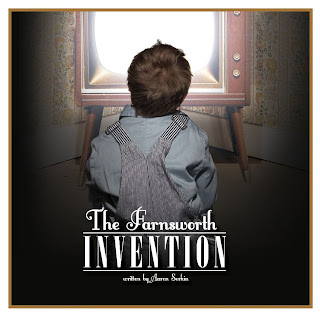 As the dust settled on the day after the Alberta general election, we moved into the first of two full-tech dress rehearsals for The Farnsworth Invention.  The last two elements that were added last night were make-up and hair.  For the most part, the show you would have seen yesterday - had you been sitting in the audience - would have been the show that will be seen when we have patrons in the seats tomorrow night.  Most of the preparation work is done; all this is left is some minor tweaking.

I found myself in the spotlight at the top of act two missing something - my cigar.  When you come to the show, you'll discover that prop is my constant companion through the entire piece.  In fact, up to that point, I hadn't done a singe scene without it propped between the index and middle fingers of my left hand.  Yelling at Farnsworth from the pool of light, I was at a loss as to what to do with my hands.

Moments later we were a foot deep in paper as the New York Stock Exchange erupted in chaos of the crash of 1929.  My mind was racing, trying to think ahead to potential scene transitions when I might be able to dash to my dressing room to snatch my stogie.

"Go to my dressing room and grab my cigar," I quietly said to one of the dressers backstage as I zoomed by backstage on my way to the second level of the set.

Back on stage, waiting in an unlit portion of the platform, I realized that I had a window of opportunity to make a run for it.  While the traders on the stock market floor scurried around as the market crashed, I dashed down the escape stairs, through the back hallway to the other side of the stage where the dresser was standing with my trusty cigar.

"Thank you so much," I said, grabbing my buddy, flying back down the hallway, up the escape stairs and back into my darkened office in plenty of time to catch my next cue.

During a show, shit happens.  Props get misplaced; moving furniture pieces hit things they are not supposed to; things get broken; actors go blank.  The beauty of live theatre is that anything can happen, and often does.  Our collective understanding of the show is so intense, that we are incredibly armed to deal with any missed line or mishap that comes along.  It happens instantly and instinctively - the speed of the brain whirring much faster than reality - often leaving those in the soft seats of Keyano Theatre completely unaware that anything untoward has occurred.

I could write a novella on the myriad things that have happened to me during theatre productions.  From having my Achilles tendon snap on closing night of Death of a Salesman (2000) to dropping multiple pages during an interPLAY performance of The Zoo Story (2009) to watching the head of a wooden mallet go flying into the audience back in high school, forcing me to kill Dracula by shoving the stake into his heart.  Some mistakes, missteps, and malfunctions are little; others are legendary.  Every single one of them add to the mystique of the live theatre experience.

Misty Oakes - who does a great job in the show playing a number of characters - is the marketing marvel responsible for promoting The Farnsworth Invention.

As ironic as it sounds, I want people to get out of their comfy chair, shut off the television and come and see the real deal, said Misty. Take a break from the tube and come and discover where it came from in the first place.  Live theatre - there is nothing better.

You'll notice that I've italicized Misty's thoughts, as I can't recall her exact words, only the intention of what she was trying to get across.  Your TV, DVD, PVR, Netflix, Apple TV, Xbox will always be there, in that coveted spot in your living room.  The Farnsworth Invention is only here for a limited time - 7 evening performances - and then it is gone, forever.  This production, in all of its coolness, is a once in a lifetime thing.  It'll never be seen like this again.  See it.

Tickets are available at Keyano Box Office, by calling 780-791-4990, or online at www.keyano.ca/theatre.
Email Post