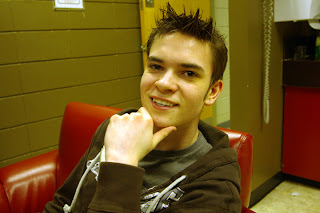 There are times when you meet famous people that it merely produces a ripple in your life - a close encounter, a surprising bumping of shoulders in a mall, or a friendly hello at an autograph signing.  I've had a few of these over the years, ranging from bringing actor Dennis Quaid his breakfast to hosting actress Natasha Henstridge in my living room, as she was going out on a date with one of my roommates.  In both of those cases, and many more, while they provided great fodder for storytelling, they did not change my life or alter its course.

For actor David Oulton, a Westwood Community High School grad, his minutes with greatness in England created a wave that took him to Hollywood, into the world of film-making and most recently on to the Keyano Theatre stage in our production of The Farnsworth Invention. 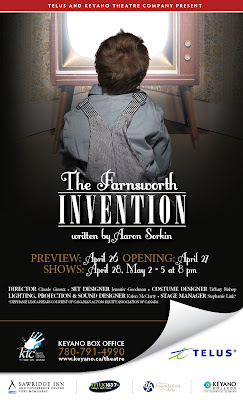 "My uncle and I were walking through Yorkminister, and out of nowhere I saw this little lady pass by," he recalled in an interview we recorded in my dressing room backstage at Keyano Theatre. "That's Judy Dench," he said. "So I just walked up and introduced myself." 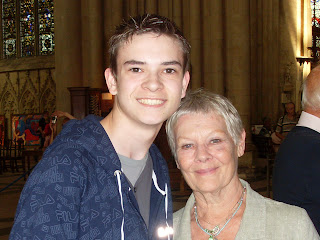 David shared that he'd been thinking about going into acting.  She asked his age and said that "now would be a good time to go and look into doing some school, and doing a course through the summer."

"The best way to get started, is get started young and you'll know if you like it or not," she suggested.

He went back, did some research and the New York Film Academy popped up, with locations around the world.  And despite the rigorous application process, he threw caution to the wind and did everything required to potentially get a spot.  Several months later, he got the great news that he was in, and would be heading to Universal Studios in Los Angeles for this once in a lifetime experience.

Hastily munching on his wrap as our one hour lunch break was rapidly coming to an end, David took me down to L.A., sketching out the 4-week experience and some of the opportunities it presented to him. 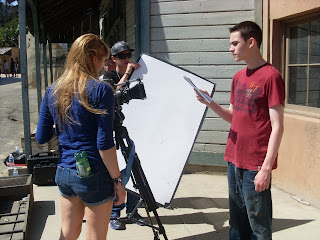 Paired up with a couple of fellow Albertans and a guy from San Francisco (appropriate considering the S.F. connections abundant in The Farnsworth Invention), he launched into the program, gathering an incredible array of information from capable teachers who were also active in the film industry.  Over those exciting days, he auditioned for a number of short films and ended up in eight of them, six of which he was the lead. 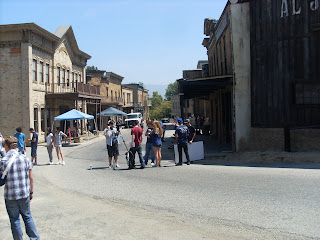 They had all-access passes to the Universal Studios back-lot, the sprawling location of multiple outdoor sets and environments ranging from old Mexico to downtown New York City, complete with towering facades and replica streets.  In fact, some of the scenes they shot on the back-lot were on a set recently abandoned by the crew of On Stranger Tides, the latest Pirates of the Caribbean mega hit. 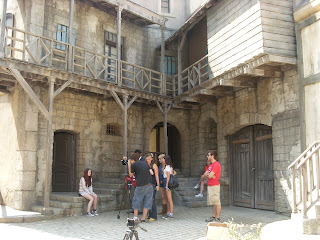 As an alum of the New York Film Academy, David has stayed in touch with a variety of people and has had several opportunities to return to L.A for a variety of things including a taping of the Jay Leno show which led to a role as an extra in an episode of Hannah Montana. 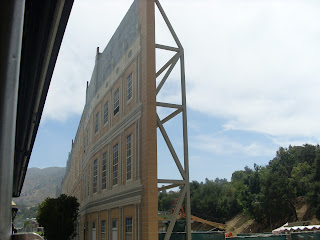 On one trip down to attend an Oscar party, David was waiting in the Edmonton airport casually watching a movie on his laptop when his mom struck up a conversation with a fellow who had sat down next to her.  David finally chimed into the fact that this fellow was not just your average friendly stranger; it turned out to be Corbin Bernson, and another brush with fame that would go from random to really cool in a big hurry. 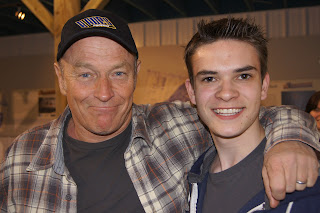 The former star of L.A. Law was on his way to shoot an episode of Castle, but suggested to David that he join him in Provost, Alberta for the shooting of his film Barlowe Mann (now in post-production). 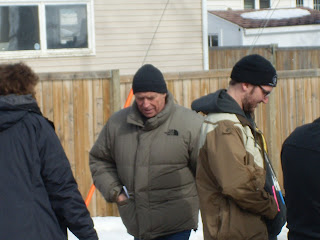 "He said I could join him on the set, shadow him, and really learn what happens on a movie set," said David. 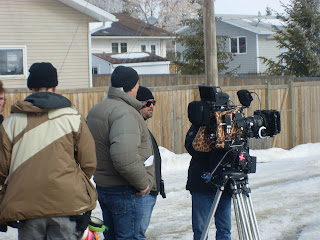 He spent 22 days on the set, being very careful to remain in the background at the strict instructions of the production people.

"The were very clear that you never look at the director, you never do this and you never do that," he said.  "All of a sudden Corbin says for me to come over, take his chair, and learn what you should be looking for in the monitor."

David laughed as he shared that portion of the experience, obviously struck by the generous nature of his host and the people who have popped into his life following that brief conversation with Dame Judy Dench back across the pond.

What's next for this talented young performer who is playing multiple roles in The Farnsworth Invention, including that of influential investor and President of Crocker First National Bank, William Crocker?

"I'm heading to Vancouver in August to attend Capilano University to get my Bachelor's degree in Communications," he shared.  "I also have signed with an agent and hope to do some acting on the side while on the west coast."

I got the sense that Mr. Oulton is both a dreamer and a realist.  He has identified and pursued a passion , yet has chosen a learning path that will provide him myriad opportunities and solid career choices.  Articulate, smart, respectful, resilient, resourceful and bold, he has many of the attributes that are required to achieve great things in life.

I'd like to think that one small kindness offered by a superstar stranger in England or a television star in an airport had a little to do with it.  Small acts of kindness can change a life.  Remember that the next time a young person asks for your attention.  You don't need to be famous to make an impact.
Email Post