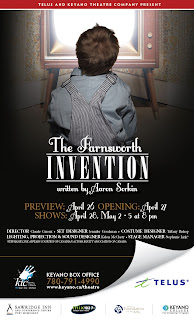 Behind the scenes, the production has been dubbed "Farnsworth, the Musical".  Musical productions, by their very nature are incredibly complex, with myriad technical elements having to come together with precise timing and intensity.  As we plunged into the first day of cue to cue in the crucible of Keyano Theatre for our production of Aaron Sorkin's The Farnsworth Invention, it became abundantly clear that the production team was dealing with a level of complexity not often associated with dramas.

The cue to cue rehearsal(s) consists of fully costumed actors on the stage going through the show while the stage manager (SM), lighting, sound and set designers integrate all the technical elements.  During this process, the players get our only chance to eavesdrop on what the SM says in her microphone to put everything in motion.  Normally she is at the back of the house, unseen and unheard by those of us waiting to for our cues backstage. We get our marching orders from the assistant stage managers, Rhiannon and Marlena, positioned on stage left and right.  The long set of instructions she utters to prepare the light and sound operators for an upcoming sequence would be indiscernible to most people.

As I stood there, in Sarnoff's spot on downstage left looking out at the theatre that this community is so blessed to have, I reflected on the confluence of technical skill and equipment that has had to happen to make The Farnsworth Invention possible.  An inspired director, moving lights, comprehensive fly gallery, world-class theatre designers, professional stage manager, beautiful projections and so much more come together through a process that extends over many months to create a theatrical experience that is truly unique.

The cast is incredibly patient through this arduous process, waiting in various spots, on stage and off, for the stage manager and her team to work through the next sequence of cues, their timings and levels.  In a way, this is the part in the process where the focus shifts from the actors to the production team; we are merely another element in their intricate mix of things they need to move about the stage and through the story with utter precision and consistency.

Last night, as the hours were getting long, I lost all sense of time. Standing in my spot, doing small chunks of lines as we slowly trudged through act one, I began to succumb to my circadian rhythm which has been programmed over time to get me soundly asleep no later than 10:30 pm most nights.  At one point, my brain completely shut down in its exhaustion, leaving me clueless as to what line came next.  Standing up there in my spotlight, the stage manager and director trying to feed me the lines, I felt like a deer in the headlights: shocked, confused, and definitely dazed.  I felt bad, to be honest, a little helpless.

I made it through that rough spot, took a deep breath and moved forward, as we all do in theatre when times get tough.  A deep sleep, a hearty breakfast, and a healthy lunch prepared for later, I am ready to embrace Day #2 of cue to cue and another vital step in the process of delivering a world-class theatre experience to our Fort McMurray audience.  The show previews on Thursday and opens on Friday.