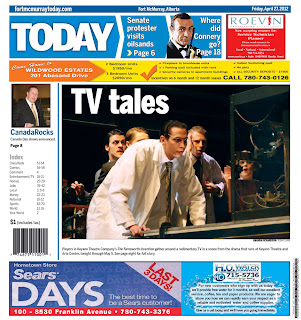 Many members of the cast and crew invaded Boston Pizza after the opening night post-show reception for The Farnsworth Invention - a tradition that goes back as far as I can remember.  Apparently they closed it down, celebrating to the wee hours of the morning.  Epic stories of frivolity were being flung around the green room as we reconvened at 6 pm for the Saturday night performance.

These young and energized artists, full of vim and vigor, probably think I'm pretty boring: drinking water at the reception and getting to bed just after midnight.  Little do they know that I used to be them.

In 1986, I was involved in Newman Players at St. Thomas More (STM) College in Saskatoon, where late night cast parties were equally epic.  I rented a small home about two blocks from STM and it became the official gathering place for this disparate group of people.  We put the stereo volume up to 10 - the sounds of Paul Simon and The Troggs bellowed out of 222 Cumberland - and partied all night long, the pile of empty bottles of Extra Old Stock reached for the ceiling in the basement.

I remember waking up in the morning and finding bodies sprawled on the floor, flopped over furniture, wherever they could find an available space.  Empty bottles, cigarette butts, and empty pizza boxes lay littered about as the sun rose on what would have been a painful day for more than several of us.  Names like Red, Jonathan, Sean, Phil, Chris, Patricia, Cherie, Tom, Terry, Curtis, Marni, Brenda, Brad and so many others rattle through my brain as I recall those halcyon days.

In the role of semi-producer, I did shows like A Man For All Seasons, Plaza Suite, Twelfth Night and The Taming of the Shrew.  It was a time when many of us did whatever was required to get the show up: set design, construction, costumes, lighting, sound, direction, promotion, etc. Looking back, it was one of the most valuable experience in my life, and helped form the foundation for so many of the things that followed:  my radio career, interPLAY, Keyano College, Events Wood Buffalo, and ultimately, politics.

One of the great thrills of opening night for me was getting to meet some of the parents of the players.  I enjoyed a great conversation with Brodie's dad, whose comments about the performance were profound, insightful, and empowering.  It was nice to meet Humberley's parents, who must think it strange that I was cast as her husband, despite being long in the tooth.  Frances and Luke's dad, an Anglican Church priest, was delightful to speak to, elegant in his tuxedo for the prestigious evening.  It was also great to chat with A-Wall's mom and dad, and share some observations of how incredibly talented he is, as both an actor and musician.

Committing to a production process is truly a family affair.  There needs to be support and encouragement from home, otherwise the journey would be untenable.  So, to all the moms, dads, brothers, sisters, husbands and wives:  THANK YOU!
Email Post