Theatre Alberta has a contest going right now where you need to pitch for them the greatest role you've ever played and why in no more than 75-words.  See contest here. The deadline to enter is January 25th.

I ended up with exactly 75-words, but here is the pitch I submitted this morning. 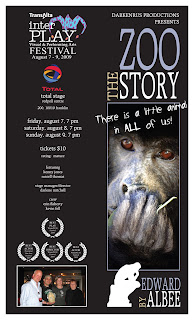 We were about a week away from performing The Zoo Story by Edward Albee and I had yet to learn Jerry’s 8-page monologue about the dog and the landlady.  You see, my grandfather had died halfway through the rehearsal process and I lost a week to travel and grieving.  It was the first time I experienced overwhelming anxiety doing a show. It all came together just in time - frenetic, unpredictable, explosive, just like Jerry. (75 words) 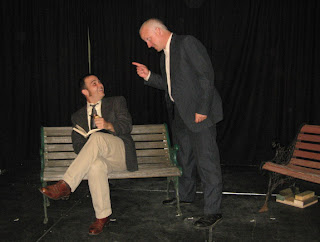 Kenny Jones (who played Peter) and I did the show at WinterPLAY for the regional one-act play festival in 2009, then traveled down to Medicine Hat with Darlene Mitchell (stage manager/director) and Erin Flaherty (crew) for the Provincial Festival, before closing out the experience with a final run of performances at that summer's interPLAY.  In the process, we won a couple of awards, but most importantly, we had lots of fun and pulled together as a team to put on an intense little show.