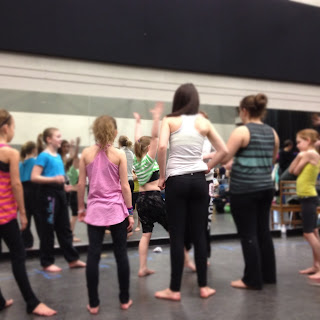 I did the math when I got home from rehearsals for Hometown...The Musical! last night, shortly after 6 pm.  If you include the time put in by the performers, their parents in shuttling them to and from the theatre, and the crew, over 500 volunteer hours went into one day of preparation for this mammoth show.  That's incredible!  By the time we get to production week, when it will be all hands on deck - over 120 performers and a crew of 16 - a single full day of rehearsals will yield over 1000 hours of volunteerism. This is truly an epic community endeavor.

Yesterday was our first introduction to choreography and the complex opening sequence that we'll leave to your own imagination until the show opens.  Miss Kim Hurley from Generation Dance Studio and many of her best dancers have joined the ensemble for this creative adventure.  For some of us, it was our first time seeing a choreographer work with a trusted and respected dance ensemble to learn a piece.

Miss Kim, referencing a couple of pieces of paper filled with words that represented the schematics of what she wanted the full piece to look like, would demonstrate a dance segment, counting it out as she went along and using the technical terms for the various moves, jumps, twists and turns.

"It is like they speak their own language," I said to my sons when I got home.  "They sounded like mostly French words.  The only one I recognized was pirouette."

The dancers would run through the segment a couple of times before carrying on to the next one.  As they added segments, they'd go back to the beginning and run the whole thing.  It was mystifying how they absorbed the sequences so quickly.  I'd never seen anything like it.  From the youngest dancer - possibly 8 or 9 - to the oldest, probably getting ready to leave high school, they demonstrated a level of skill, excellence and professionalism that was inspiring to watch.

"Among you today, are some of the best dancers in Alberta," said Miss Kim in her preamble to start the day.  She was being dead serious, and the point was hammered home through the seven hours we spent learning how our more modest dance assignments would brilliantly mesh with theirs.

"Though they are among the best, they are humble and here to help you."

I was pretty relieved to hear the help bit, because I've always struggled with the dancing part of this musical theatre business.  As the saying goes, I come equipped with two left feet.

One of the hardest things about dealing with the largest ensemble effort in Keyano Theatre Company's history is finding enough space.  When we're all in the pseudo wings, a minute amount of space provided in the rehearsal hall, bodies get stacked on bodies with some spilling on to the play area in anticipation of their next entrance.  That said, everyone was incredibly patient with each other as we plowed through what are likely the two most complicated sequences of the show.

By the end of the long day, bodies were tired, nerves were a little frayed, and we were all eager to get home to enjoy a good soak in the tub.  But, there was a definite sense of accomplishment about the work we had done and distance we had traveled on our journey to Hometown.
Email Post