"You guys are incredible," said Bear to a couple of the Generation Dance Studio girls on our lunch break on Sunday.  They smiled from ear to ear. 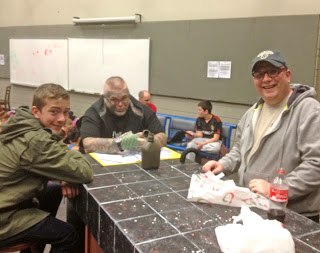 In many ways, this is one of the most unlikely collection of performers you're likely ever to see.  Sitting with Bear, a former marine turned manager of the local Showgirls nightclub who has also spent time working with kids with handicaps and running security for rock stars, are Jerry Neville, a veteran broadcaster and morning show host with Country 93.3 and Julien Naud, one the most talented dancers I've ever seen.

Bear and Jerry play themselves, real characters woven throughout the piece, while Julian dons several hats throughout the show, dazzling us with his world-class dance skills.

"I'm so proud to see so many new faces doing such great work," said co-director Claude Giroux, his voice breaking ever so slightly at the end of a long day of rehearsal.  I'm not sure if anyone else caught it, but I knew there was a little more going on behind the words.

"I got a little choked up there," he shared later that evening, a little surprised at the unexpected emotional connection to a process that is so much bigger than putting on a good show in February.  It is about giving a melange of quality people an experience they will treasure, the ultimate hope being that they'll want to do it again (more to come on the 2013-14 play selections). 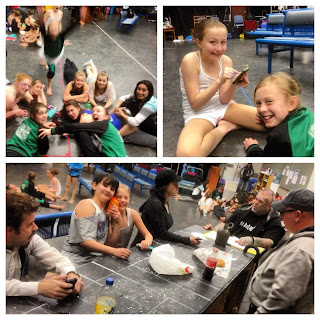 I'd be a liar if I said there was no angst around the recruitment period in the fall.  There was significant stress as we had set the bar high in terms of the human demands of Hometown...The Musical! The number of people we required far surpassed anything we had ever attempted and success depended on attracting a wide swath of new people to the company.  We put it out to the world the best way we knew how and hoped that people would show up.  They did.

Everyone is integral to the process, from the folks with speaking roles, to the dancers, to the band, to the drummers, to every single member of the ensemble.  When someone has been delayed in traffic or has a conflict that can't be avoided, they are missed.

There is a lot of learning going on for all of us as the pieces begin to come together.  We made it through the entire show on Sunday, actors scurrying about trying to figure out what was coming up next.

"Doing a musical is a lot like being a duck," said Claude.  "On the surface, everything appears calm, serene, beautiful.  But, under the water, the feet are paddling like crazy." 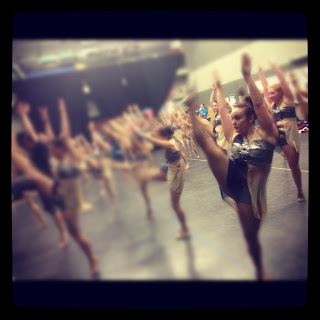 When you finally come and see the show, you will enjoy scenes, songs, dance and video sequences that will seem like they magically just happen, effortlessly.  The truth of the matter is that over 100 sets of feet will be flying down the hallway that runs adjacent to the main stage, trying to do quick costume changes and get to their next exits without colliding into each other.  The turbulence below the surface of the water will be a thing of beauty.
Email Post