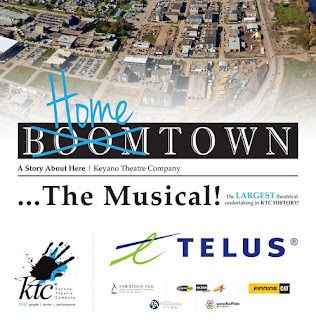 I was going through choreography and blocking in my head all night long.  For the past ten days, I've been battling whatever bug has been plaguing so many others this winter, an intermittent low-grade fever, sandpaper throat, and congestion up the wazoo (and other places).  At night, in this less-than-ideal state, my brain tends to focus on that item which is most prevalent in my life and replay scenes over and over again.  There is nothing more prevalent than Hometown...The Musical! right now and for the foreseeable future.

We went through all the Grandpa George scenes to start the rehearsal yesterday, the 5th employee hired by GCOS (Great Canadian Oil Sands, now Suncor), a "man as old as the hills".  A character built from a melange of research interspersed with interviews conducted with local seniors; George is a little bit of Len (a fishing buddy of mine) and a lot of Jack Avery, a World War II veteran and employee #5 at GCOS.  The Fort McMurray Today's Jordan Thompson interviewed Jack in a story that appeared on November 8, 2012 - Thoughts from a Second World War Veteran.  In the role, I get to tell a lot of stories, of the old days when the place we call home was much smaller, of the emergence of oil sands, of community and people.

I did my best to get off  book for last night but missed the mark by just a little bit.  Being free from the shackles of the script will allow me to spend more time in the full skin of the character, exploring what it might be like to be 91 years of age.  I'm blessed to have a lovely family of actors to play with: Deanna (daughter), Russ (son-in-law), Jack (grandson) and Natalie (granddaughter). I also get to be interviewed by a reporter being played by YMM magazine founder and publisher Krista Balsom.

There were a number of people, including Krista, who were unable to join us last Sunday for the blocking of both the opening sequence and the dance number that ends Act One.  I can't imagine what they were feeling yesterday trying to comprehend the flurry of activity and movement of 60 people traversing the stage back and forth.  But they were really cool about it and just picked things up as we went along, reviewing choreography bits with Miss Kim and her dancers.

I'm so glad to be placed near Jon Cestnick, one of the Generation dancers, and Tim Heggie, a veteran triple-threat, for these numbers as I can watch what they are doing in my peripheral vision and just follow along.  My body is slowing getting the movements, though at times I feel like I'm a step and a half behind.

"We're going to do this 20 more times before we open," said Claude Giroux, co-director of the show.  "I promise you, this is going to be fabulous."

Many of us are still trying to learn each others' names.  In the brief pauses between scenes last night, I picked  a dancer that was near, gently tapped on their shoulder and asked "What is your name again?"  I hope they don't think I'm a total dweeb for not knowing, but it's important to me to be able to put a face to a name, and address someone appropriately.  Kennedy, Jenna, Leeanne and Lexi all got the tap last night.  A few more every day, and I might be in a position to correctly name the entire cast by the end of next weekend.

Excitement is building toward Sunday as Mayor Blake is going to pop in for the first time to get a sense of her role in this epic production.  She has the enviable task of playing herself, doing what she does best, being the primary spokesperson for our region.  It will be fun for her to soak in the incredible energy and talent that will be gathered around her to tell the story of Wood Buffalo.

Meanwhile, I'm on my second cup of tea - certainly not my beverage of choice in the morning but a necessity the past few days as I nurse myself back to health.  My throat feels so much better when it's been bathed in honey-infused chamomile.
Email Post