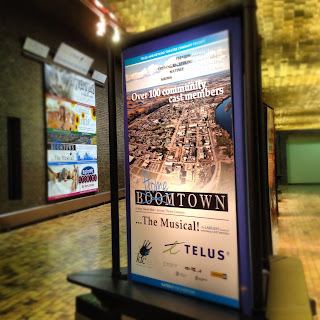 "Is that the mayor?" whispered one of the younger cast members of Hometown...The Musical! as we began our first walk through with Her Worship of her scene near the end of Act One on Sunday.

"Everybody," announced Claude.  "This is Melissa."

For the purposes of the creative process, and the execution of the incredible Wood Buffalo story that is being stitched together over the next few weeks, she is just another member of the cast, albeit, a rather important one. 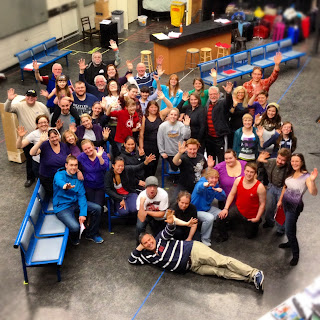 While this is not the first time that a sitting Wood Buffalo mayor has appeared in a play - Guy Boutilier did it the first time when he performed in the musical How to Succeed in Business Without Really Trying in 1997 - it is the first time that our municipal leader has appeared as a cameo.  Melissa is playing herself in this future-oriented creation, celebrating the grand opening of our new airport terminal.  In fact, true to form when it comes to the Office of the Mayor, the role of "Mayor" will also be played during the run of the show by Deputy Mayor Christine Burton, as Melissa has some commitments in the second week.

We have been dancing with the first layer of the story - basic lines, character blocking, singing and choreography - since we started rehearsals in early January.  This weekend we began adding the second layer, which is the "life at the airport layer," said Claude.

When you really stop and think about it, theatre is a series of layers that get stitched together through hours and hours of rehearsals.  From the internal layer - the intentions and motivations of each individual player - to how they move about the stage and the narrative, to all the technical elements that get incrementally added through the entire process.  By the time you open the show, all of these layers (hopefully) exist as one cohesive unit. 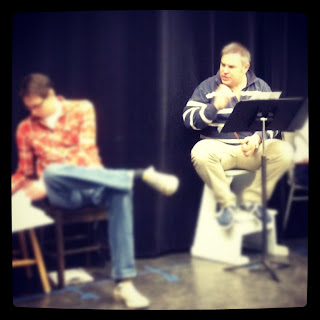 Watching Claude bridge scenes, that to this point have been worked independent of one another, was fascinating.

"He just sees things so clearly," said co-director Michael Beamish.  "I'm learning so much just being able to sit beside him and watch his creative process."

Claude pays attention to the beats between the scenes in a way that results in a better experience for the audience.  Watching him work through the timing of one little transition, he patiently had the actors and the Music Director Susan Lexa go through it three or four times, until the "beat" was exactly perfect.

Unlike the actors, the creative team has been living with this script for months, trying to piece together in an ethereal way how it would or should come together.  Adding in many different bodies, props, set pieces and myriad other elements forces them to adjust on the fly, always keeping in mind the final vision of what they want the audience to experience.

It's fun to watch, but it requires a lot of patience.  Days can be long and grueling when you're working through all the business.  It's worth it though, as all of the attention to detail makes all the difference in the world when it comes to the quality of the show.

The next week will be nose-to-the-grindstone, as we shoot to do our first stumble through of the whole show late in the afternoon on Sunday -- lots of stitching and additional choreography to do between now and then.
Email Post