The annoying warning pops up, the little computer in the car reminding me that it is almost time to get the oil changed.  It beeps at me each time I start up the car, the warning message staying on till I manually make it go away.  Damn you!

Yes, I get the message.  No time today.  Council meeting.

Wednesday:  You have 3% oil life left.

Now, I'm really started to get anxious.  Not only is my car frightfully dirty, it is threatening to come to a grinding halt - potentially while I'm in the middle of the tour tomorrow with Alan Doyle from Great Big Sea and Seamus O'Regan, scheduled for tomorrow.  There also seems to be a sinister oily smell as I drive down Franklin. I swing by the Jiffy Lube near our house during the lunch hour, thinking that everyone would be stuffing their faces, and not getting their oil changed.  I was wrong.  Trucks are lined up as far as the eye can see, in this case four vehicles too many, patiently waiting on company time to get their tune-up.

Screw it!, I thought to myself.   Maybe I can get into the car wash.

Thursday:  You have 2% oil life left.  Destruction is imminent.

I swing by the Jiffy Lube on the way to work, hoping that they might be open early.  They are! And no line-up.  I pull up to the big door, a friendly attendant opens it up, and the car gets its much-anticipated oil change.  My internal oil pressure goes from extreme to just right as I pull out and head to work ten minutes later.

It's funny, the stress I put myself through.  But being the perfectionist that I am, it is important to me that my vehicle is operable and somewhat clean when I take guests on tours.  There have been a few over the years that have enjoyed the wonders of Wood Buffalo from the seats of our Ford Escape - Preston Manning, Ezra Levant and members of the Dierks Bentley band among them.

I reconnoitered with Seamus at Mitchell's, where he was enjoying one of the essential foods you absolutely must experience when in Fort McMurray - sunshine bread - with the wonderful Cheryl Robb from Syncrude Public Affairs.  He was instantly warm, welcoming, and comfortably familiar, and in a pretty upbeat mood after getting his first on-the-ground taste of "the single largest industrial project in the history of mankind." 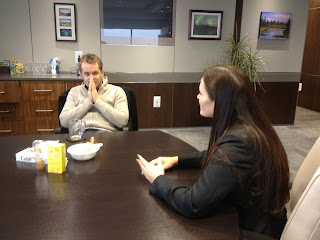 "That's a pretty remarkable statement," he said, as we pulled into the parking lot at MacDonald Island - loaded with cars even in the middle of a weekday afternoon - after having spent some time chatting with Wood Buffalo Mayor Melissa Blake in the comfortable environs of her 7th floor office with a marvelous view of our city centre, and after picking up Alan Doyle from his hotel.  He had been on a movie set in New York till the wee hours of the morning, before he drove to JFK to catch his flight to Fort McMurray.

"Winter's Tale," he said, pulling out his iPhone and showing me a promotional shot. 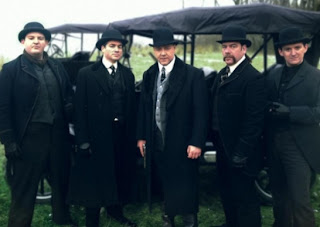 "Is that Kevin Spacey?"

"No, that's Russell Crowe. We've got one more day of shooting before I can get rid of this," indicating the epic mustache he is sporting for the role of Dingy in the film also starring Colin Farrell, Will Smith and Jennifer Connelly. 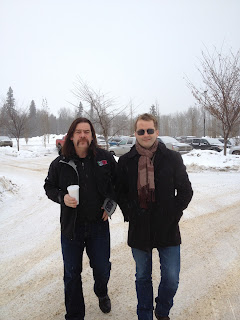 We had prearranged a tour with Tim Reid, COO of MacDonald Island Park, a facility completely different from the last time Alan was in town with Great Big Sea performing at Rock Island; the redevelopment was in its early stages at that point.  This would be Seamus's first glimpse of what is currently the largest recreational facility of its kind in the country and about to get a whole lot bigger when the expansion is completed in 2014. 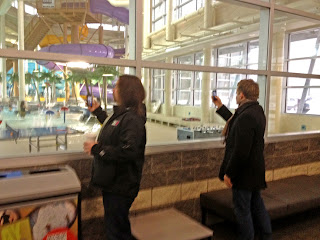 It was fun to see both of them rush to the window of the Syncrude Aquatic Centre the moment we stepped in the door.

"The missus will want to see this," said Alan. 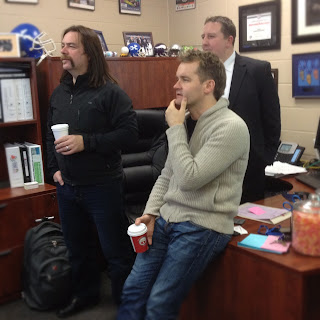 Their amazement continued as Tim shared with them the flyover video of Shell Place on the big screen in his office.  There were several comments that really stuck with me, which I typed into my iPhone right away to ensure I got them exactly right.

"This has a flavour similar to some I've seen in places like Finland, Norway and northern Germany," he said.  "But this is probably the best one."

"This is likely the single greatest civic achievement I have ever seen." 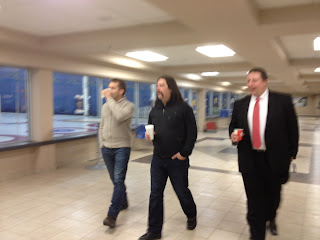 By the time we had circumnavigated the Suncor Community Leisure Centre, Seamus and Alan were pontificating and scheming on how to get something like MacDonald Island Park in St. John's, clearly inspired by the current crown jewel of the Regional Municipality of Wood Buffalo. 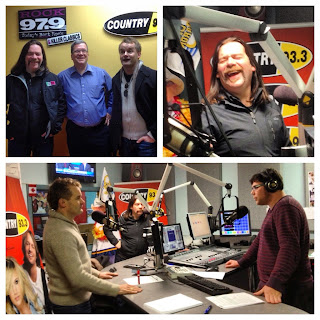 We wound up the tour with a stop at Country 93.3, my old stomping grounds where I got my start in Fort McMurray back in 1996.  They spent around 13 minutes on the air with Stuart McIntosh talking about community image, sharing some stories, and previewing The Global Address to come later that evening.

Funny, thoughtful, attentive, authentic - Seamus O'Regan and Alan Doyle equally and eloquently embraced the challenge of helping us deconstruct and discuss our issues with community image.  They were both super present and engaged during their entire stay, and while I was unable to attend their chat with Mayor Melissa Blake on the main stage at Keyano College, I heard from numerous people that it was outstanding.

"Alan and I had a lot to say, but not nearly as well stated as Her Worship's words," texted Seamus the morning after as he prepared to head back home.

"Have me back.  Alan and I really enjoyed it."

We're glad you did, and we surely will.
Email Post