As soon as I had found my book, the latest by Sir Ken Robinson, I had an image in my mind of sitting on a bench facing Coal Harbour.  It took me several blocks to get there, but I settled in with my cup of Starbucks and began reading, as the Holland America cruise ship Zuiderdam appeared to be getting ready to shove off, passengers milling about on the various decks. 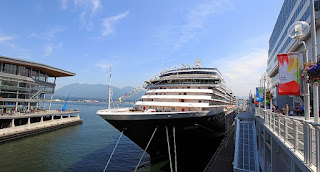 The lovely old lady came and settled in shortly after, swivelling her walker around and taking her spot on the bench about four feet to my left.  Placidly, she watched as final preparations were being made on the ship for departure, and myriad tourists snapped pictures and portraits, making sure that the impressive vessel was strategically placed in the background.

Aware of her, feeling the need to engage, I remained silent and let time and pages pass until the sound of the ship's horn shattered the air, four successive blasts followed by one long sustained final one.

"I guess that means they're about to leave," I said to the lady.

"No, that's the one hour warning," she said.  "They will likely leave at five."

We talked back and forth for a bit, at a safe non-commital distance, of the boat, Alaska cruises, on the fact that she was 94 years old, and how she came to be sitting on that bench.

"You're as a young as a spring chicken," I said, doing my best to cheer her up, as she seemed a little down.

"I'm not having a good day," she said.  "It's hard, as I'm so incredibly alone.  Everyone else has passed on and I never had the good fortune of having children."

Her eyes misted over as she looked forward, staring at the Zuidendam, connecting with memories and feelings that had decided to overtake her on this particular day.

Born in 1920, Kathleen Snowden, nee Curd, was raised in England - Plymouth I think, if my memory of the conversation is correct; I wasn't taking notes.  IAt the age of 10, she discovered that her mother - a dear friend of Lady Nancy Astor, the first woman to sit as a Member of Parliament in the British House of Commons - had adopted her as she been orphaned as a baby. 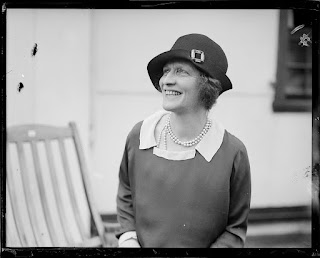 "I was devastated, as you might imagine," she said.  "My mother and father were such kind and wonderful people for taking me in."

Her older half-brother was pretty shocked to come home from school one day to find his mom cradling a baby.

"He wasn't very comfortable with me," she said.  "We never became close."

She worked for the BBC during the Second World War, picking up on a trade that her older brother had pursued in the early 1920s, one of the early pioneers of radio broadcasting.  She married her teenage sweetheart, a musician in the forces who played both violin and saxophone.

"When you look back on your life, when were you the happiest?" I asked.  "What was your best day?"

"My wedding," she said, with almost no hesitation.

It was a jubilant gathering of about 40 family and friends s they exchanged wedding vows and celebrated.  It was a large group for the time, as rationing was still in effect due to the war effort.

The marriage didn't last however, as he left her for another lady, a fellow musician in the orchestra with which he was working.

"They were probably better suited for one another, both being musicians and all," she said.  "But it was still incredibly painful."

She emigrated to Canada at that point - it was 1961 - with a friend, landed in Montreal and drove across the country, ducking down into the States on several occasions, as the TransCanada Highway was still under construction at the time.

"There were no border crossings back in those days," she said.  "We just went in and out. Nobody seemed to care."

Her friend went to work in the Queen Charlotte Islands and Kathleen began a long career with BC Hydro in Vancouver. And while she had "her moments", she never remarried, and eventually lost her mother, who lived well into her 80s.

"I got a letter from my ex husband's parents at one point," she said, "asking if I would be willing to see their son the next time I came to England.  I agreed and we ended up getting along like a house on fire. We saw each other several times after that and had lovely visits.  To this day, I don't know if his wife ever knew."

A veteran of five cruises to Alaska, Kathleen is contemplating taking another, though she is somewhat hesitant because of recent health issues.  At 93, she is very active, today having walked from her home in English Bay to the Waterfront area, a distance of 10 or 15 blocks, a journey that takes her about 45 minutes.  She volunteers each Monday at the Christ Church Cathedral, greeting visitors as they come in to explore the iconic structure on Burrard Street.  On Sundays, she gets together for social visits with friends, also at the church.

On this day, she had walked downtown in the morning, had her hair done, grabbed some lunch and eventually found herself on the bench next to me, waiting for the Zuidendam to load up, shove off, and begin its seven-day round trip.

"When you come down to the waterfront, do you find that young people stop and chat with you from time to time?" I asked.

I was filled with sadness when she said that, perplexed as to why younger people don't seize the opportunity to connect with seniors.  Being able to sit and talk to Kathleen on that bench felt like such a blessing to me, a gift, as she shared personal anecdotes from years past and a longing for connection and meaning.

"I don't know why I'm telling you all of this," she said, visibly surprised at herself for opening up, and sharing intimate moments from her long life.

"Would you mind if I took our picture?" 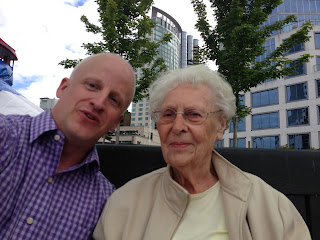 She smiled anyway, as we exchanged contact information before I headed back to my room to get ready for dinner.

"Maybe I'll send you a Christmas card," she said.