I had lunch with composer Derek Charke on Thursday (June 20).  We had met the first time during Arts Council Wood Buffalo's first Coffee Klatch the previous week when he shared details of the writing project he was doing in our region, preparing a new work for the Kronos Quartet.


He integrates the sounds of place with music to create compelling soundscapes.  His tools are his recording devices, technical know-ho, and his sense of musical form, structure and possibility.

During our first conversation, we talked about a lot of things, including the hope to have the Kronos Quartet premiere the piece here in Wood Buffalo.  Imagine this song about our region, people and industry being a part of this world-renowned ensemble's repertoire as they play some of the most prestigious concert halls in the world.  Imagine that song being played in public for the first time in the region that inspired its creation.

"Thinking way outside the box," I began.  "Wouldn't it be great if we did the performance outside, on a reclamation site?"

The concept of doing this world-class world premiere on a beautiful meadow that used to be an oil sands mine, never even struck Derek as a thought, let alone a remote possibility.  Think about the interest we would generate and the messaging that would flow out of this kind of experience.  I don't know the legal and process impediments that might negate this from happening, but I thought it was a suggestion worth putting out there in the universe to see what could happen.

WIth that background, Derek and I convened at The Pantry, my favourite spot in Fort McMurray for a conversation friendly lunch.  He had just been out to our landfill, capturing some sounds and learning about our Zero Waste initiative from Kevin Scoble, a visionary plan to eliminate land-filling from our list of municipal services in favour of a waste as resource approach.


He had also spent some time in Fort Chipewyan, a beautiful community in the northern reaches of our municipality, the longest continueously inhabited settlement in Alberta, and many other spots including, most recently, Fort MacKay for the Treaty Days celebrations.


As he sat across from me sipping on his coffee, I could tell that hours and hours of sounds were coalescing in his mind and beginning to shape themselves into a meaningful musical structure.  The rhythmically soothing sounds of a processing plant, the piercing hoots of an owl, and the sounds of the boreal forest will likely all find their way into this yet-to-be-named composition for the Kronos Quartet.

"I'm very sensitive to the fact that I don't want to the title of the piece to make a political statement," said David.  "If we use tar sands, or if we use oil sands, both send very charged messages."

The suggestion of "Bituminous Sands" led to "Bituminous Songs", which was getting closer to striking the right chord.

"I need to let this kind of thing sit with me for awhile," he said.

It was at this point in the conversation when he shared details of a composition he did called "Oikos Ekos" that incorporated some spoken word elements.

"That's what's missing for me right now with this project."

As soon as he said it, Elsie Yanik popped into my mind.  She had recently spoken at the City-Wide Prayer Meeting, offering up one of her beautiful blessings that have graced many a gathering over the years.  Celebrating her 96th birthday this September, Elsie is a vibrant, generous, and wise Métis elder who has a well of knowledge about the traditional lifestyle and the history of Wood Buffalo.

"You should meet Elsie Yanik," I said.  "She is a 94-year-old (I got the age wrong in the conversation) elder who often does the blessings at big events.  In fact, she did an amazing blessing just the other day at the City Wide Prayer Meeting." 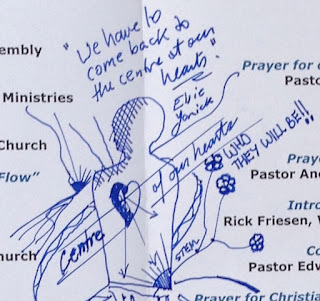 "Dear Creator," she had said.  "Help us return to the centre of our hearts."

"What was that she said again?"

"Dear Creator, help us return to the centre of our hearts," I repeated, as he frantically typed the words into his iPhone.

"That's the name of the piece.  There is no question in my mind, that is exactly what it needs to be."

As he sat there, looking at me, then through me, to a place off in the future, his eyes misted over, visibly overcome with an inexplicable wave of emotion, as if a great quest had just come to an end, a great question answered.

We concluded our lunch. I returned to my office and gave Elsie a call to see if she would be willing to meet with Derek and potentially have a couple of her prayers recorded.  She said "absolutely", and Derek was sitting on her sofa within the hour.


"The world works in mysterious ways," wrote Derek in a Facebook post later that day.  Indeed it does.