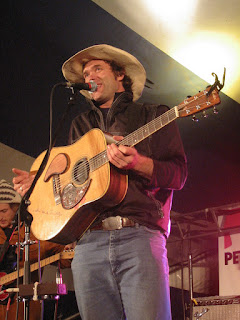 The last time Heather and I went on a date night to see Corb Lund it was during the winter version of the interPLAY Festival, in August 2004.  Temperatures that year hovered just about zero, prompting extraordinary sales of sweaters in the marketplace as patrons struggled to keep warm.  I vaguely remember seeing a snowflake or two, mixed in with the frigid rain as it fell through much of the weekend. 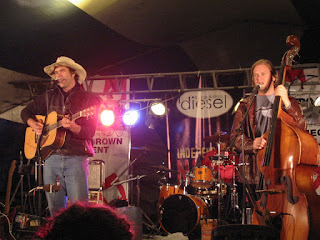 This was the period just before Corb and the Hurtin' Albertans hit the big time.  Their album Hair in my Eyes Like a Highland Steer was in the can, having just been recorded down in Nashville, with its breakout single "The Truck Got Stuck" soon to become a Canadiana standard.

I have to thank Mike Plume for enabling this particular booking, as he introduced Corb and I by email, suggesting the show.  As Heather and I swayed in the rain to familiar tunes and new ones that absolutely sizzled, we were wrapped in a kind of warming magic that I'll never forget.  There was no place on earth I would rather have been than right there on Franklin Avenue, dancing to that authentic Alberta cowboy sound, with my beautiful wife in my arms. 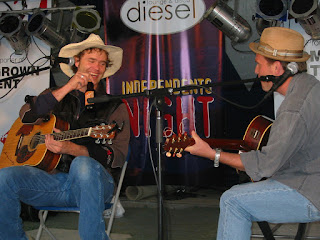 A highlight of the concert was when Corb invited Mike to join him on stage for a couple of songs, including the haunting and beautiful ballad "Short Native Grasses (Prairies of Alberta)". 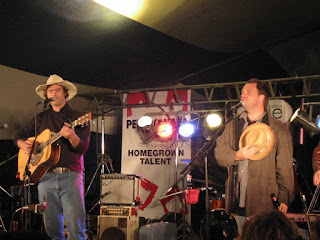 The album was released early the following year, the singles began popping up on country music radio stations across the country, and Corb Lund and the Hurtin' Albertans began their ascendancy.

Almost nine years have flowed under the bridge. Corb has returned a couple of different times, an appearance at the first and only Big Spirit Music Festival and several stops at Keyano Theatre, but I will always recall with sentimental fondness standing in the rain hearing some of the most original and quintessentially Albertan songs that I had ever heard, up to that point and since. 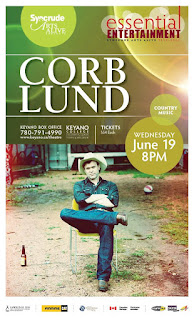 The show is tonight at Keyano Theatre if you're interested.  The last I checked, there were a handful of seats yet to be claimed.  Come and join us; you'll be glad you did.
Email Post