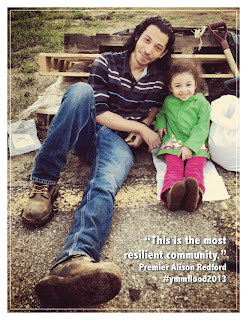 When we look back on the floods of 2013, what happened in Wood Buffalo will probably be viewed as a prelude, a small sampling of what was to hit communities like Canmore, High River and Calgary just nine days later.

The rapid rise of the Hangingstone River happened on June 10th and 11th, mobilizing a response that included the declaration of a local state of emergency and the evacuation of a number of neighbourhoods adjacent to the swollen stream.  Normally a serene trickle, it turned into a raging river thanks to an extraordinary amount of rain and a water table that was uncharacteristically high.

While the forecast called for additional precipitation amounts in the 100 mm range, Mother Nature decided to spare us. By early the following week we were able to transition from response to recovery.  The number of  people displaced was just over 400, significant damage occurred to a number of roadways and bridges, and Heritage Park, Lions Park and the Sport and Wellness Centre at Keyano College will be spending months recovering from the deluge of water that just "invited itself in".

The damage estimate of what the Hangingstone River did in Wood Buffalo is still being tabulated, but it will pale in comparison to what the final tally will be down south.  Our flood received national attention and calls of support from people near and far.  What is happening in southern Alberta right now is at a scale that is almost unimaginable.  Entire communities have been flooded and between 75,000 and 100,000 people have been evacuated.  The images come out of High River and Calgary particularly are reminiscent of New Orleans in the days after Katrina.

I was supposed to be on a plane to Calgary today, then driving to Banff for a weekend workshop.  A short email mid-morning yesterday alerted me to the circumstances unfolding in the Canmore area, as Cougar Creek was growing into a mighty force that effectively cut-off the community, and access to Banff.  Organizers of the weekend sessions scrambled to find a venue in downtown Calgary and by 4 pm had a complete set of alternate plans and an intention to move forward.  As evening and more rain fell on Calgary, whispers of downtown evacuations turned into reality and by 11 pm, the gathering was formally cancelled.

"As tragic as it is to see the streets of so many communities empty of people and full of water and to think of the thousands of people who've been displaced, it's incredible how we come together in times like this," said Premier Alison Redford during a flood update briefing this morning (June 21).

"There are pictures of people being rescued on combines. There are volunteers who are putting in long hours right across the province - we saw this in Fort McMurray last week as well. This is who we are as Albertans. We are resilient. We're strong. We come together. And we certainly come together when times are tough."

After all the silt, debris and damage is cleaned up, when our parks and facilities return to full operation, when the floods of 2013 become a distant memory, the thing that many of us will likely remember most strongly is how people came together in a time of need.

I've heard personal anecdotes from a number of community leaders here in Fort McMurray who were visibly moved to tears seeing neighbours helping neighbours, emergency responders and municipal personnel going above and beyond the call of duty, and people who had been displaced being stoic, brave and resilient.  The sense of citizenship and community we saw reminded us of our humanity, and bound us together in a way that we'll never forget.
Email Post