TEDx Fort McMurray was such a huge experience, that I had to break up the telling of what happened into two parts.  It seemed logical to use the lunch break as a natural dividing line. 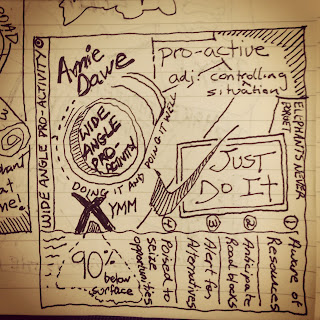 Amie Dawe, a municipal engineer working for the Regional Muncipality of Wood Buffalo, was first up in the afternoon, offering us a bright and shiny tool for our Life Kit: Wide Angle Pro-Activity.  She grew up in Malaysia, studied in Vancouver, and worked in Australia, gathering along the way new ideas on how to create, respond to, and maximize opportunities.

She suggested four tactics to open up our field of vision and enable our field of dreams: 1) Be aware of available resources, 2) Anticipate roadblocks - they will pop up, 3) Be alert for alternatives - there's more than one way to skin a cat, and 4) Be poised to seize new opportunities.  It's an age old adage, but essentially, Amie was compelling us to not think about it, but to "just do it!"

I had never met Brent Hughes, save for the brief introduction back stage at the start of the day.  Reading his bio in the virtual program, I'm a little unclear as to whether he lives in Wood Buffalo, or if he was another import sharing his amazing ideas with the over 200 people gathered for a full day of learning and exploration.  It doesn't really matter though.  What does, is that he delivered an outstanding presentation - The Perpetual Change - and earned a rousing response. 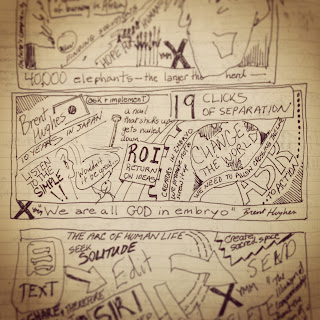 Spending over 9 years in Hiroshima, Brent became very familiar with Japanese culture and a leader in lean manufacturing concepts. We are all 19 clicks away from all the information available on the Internet, he said -- I think.  I've italicized the quote as I'm not 100 percent sure I remember it correctly, but I believe the essence is intact.  He suggested that we need to shift our understanding of that ubiquitous corporate rallying cry - ROI - and transform it from Return on Investment to Return on IDEAS!

From encouraging failure, to colouring outside the line, we need to turn ASK into ACTION.  Sentences that start with "Wouldn't it be great if..." need to be encouraged, not discouraged. 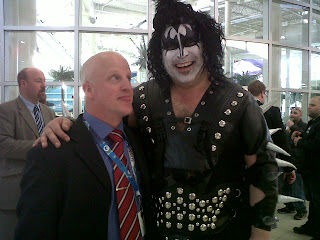 I'll never forget the time that Theresa Wells sent me a note asking if she attend the CanadaROCKS announcement press conference.  If my memory is right, it was the day Claude Giroux (TEDx presenter from Act 1) strode into the atrium at the Suncor Community Leisure Centre dressed as Gene Simmons to announce that one of the world's great rock bands was going to play in Fort McMurray.  It was a shift in thought for me, catalyzed by Theresa's ask, that bloggers needed to be added to the media mix in a mindful and consistent way.

Theresa has gone on to be our region's most prolific and most read blogger via www.mcmurraymusings.com. Her voice, both written and spoken, has grown in stature and influence here in Wood Buffalo and across the province.  In many ways, she is that unfiltered, unfettered, uncontrolled, unstoppable voice of the people that was, and is, so desperately needed.

I'm so glad that the Intrepid Junior Blogger (Sam) was there to watch her mother's TEDx presentation, Scared to Live.  Theresa left it all out on the stage, going to her most vulnerable places and how she went from being scared to live, to waiting to live, to wanting to live, to being ready to live.  A single mom, a working professional, an accomplished writer, and Fort McMurray's most widely known lover of shoes, Theresa is embracing life's possibilities and helping to change to world. 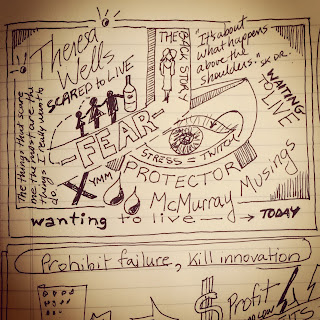 She was in tears when it was all over, as she stood there on that little carpet waiting for Matt Youens to come out and rescue her from the deafening standing ovation.  If that isn't living, I don't know what is.

To be honest, I'm at a loss as to what to say about Katie Long's Sisterhood presentation.  With each previous presenter, my pen really started working at about the 5 minute mark.  So, when Katie wrapped things up after about 6 minutes, I had only begun drawing.  Despite that, I got the sense that getting out on that stage was a big deal for this 20 year old family support worker, originally from Thunder Bay.  She had prepared dozens of versions of what she would say before coming out from behind the curtains and delivering the one that mattered. 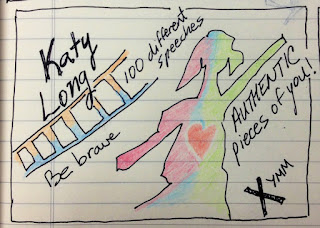 I wrote down one phrase: "authentic pieces of you!" I really look forward to watching this video when it comes out.  While it was the shortest of the 11, I get the sense that it was packed with meaning, wisdom and a whole lot of bravery. 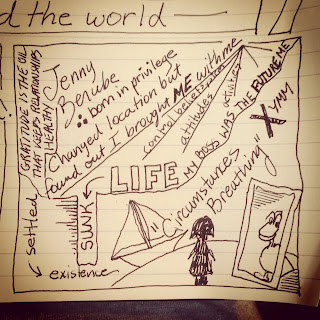 TEDx Fort McMurray came to a close with Jenny Berube's Change Me / Change Everything.  "Born into privilege," Jenny thought that moving across the ocean would help chart a new path for herself. However, she came to a shocking realization.

"I changed location, but found out that I brought ME with me."

In the new world, she settled into existence; she was "circumstances breathing".  What an incredible term to describe a life in neutral.

At some point she realized that she had to take matters into her own hands.

"My boss became Future Me," she shared.

I'm sure there is a whole lot more to it, but today Jenny is a vibrant, ebullient, glass-is-half-full, comfortable-in-her-own-skin, mother, wife, financial success coach, writer and arts advocate.  She is no longer circumstances breathing, she is the captain of her ship, the master of her soul.

In respect of our 25,000 precious days, she offered five tips to become the architect of your life: 1) Set goals, 2) Pre-plan your day, 3) Create a system of accountability, 4) Move forward every day, and 5) Find others who can encourage you along the way. 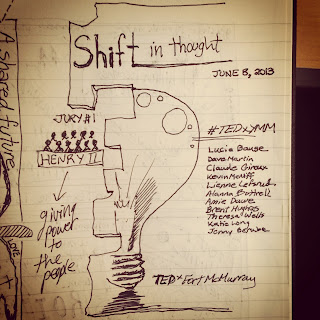 We stood, we clapped, we cheered, in celebration of Jenny and 10 other outstanding presenters that comprised the 2013 TEDx Fort McMurray.  It was a day that provided inspiring shifts in thought and created much anticipation for who will come forward to speak in 2014.

My wife is determined to go down that path and asked me to take a picture of her on the TEDx carpet, so she can add that image to her visioning board. 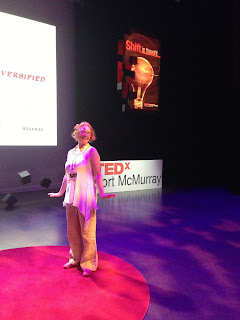 She is not alone.  I heard two or three others expressing a desire to embrace their fears and share their stories.  I can't wait for next year.
Email Post