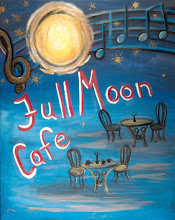 Many long years ago, we had an awesome spot at the east end of Franklin Avenue where the creative community converged.  Kaffe on King was legendary for its Thursday nights of live music, sharing of talents, and connecting with friends.  Andrea and her core team had to acquiesce to mounting costs, labour shortages and the personal impacts of trying to run an independent sandwich and coffee shop during dynamic economic times.  They shut it down, and for a period of years the space became The Rook, which turned into something else, which became the Wok Box.

Heather and I met at Kaffe on King on April 11, 2001, or as we like to call it: "Date Day".  It holds a special place in our hearts for that very personal reason.  It holds a special place in the hearts of many others as it was a cultural incubator, a place where many emerging artists put themselves in front of an audience for the first time.  It was a place where  talents were shared, enjoyed, and discovered.

Full Moon Café has helped fill the creative chasm that was create when the Kaffe closed its doors for the final time, and for nine years has nurtured artists of all kinds.  As this season drew to a close, Campbell's Music opened up its doors, cleared out a bunch of space, and hosted an amazing evening of music and spoken word presentations.  Surrounded by instruments, music paraphernalia, and a full complement of music store personnel, the venue could not have been more perfect. 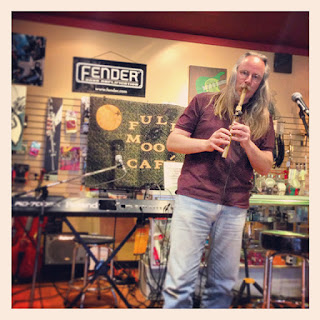 Frank started thing off with his Native American flutes, instruments that produce an ethereal sound, mystical, haunting.  Heather was next with her reading of "Something has shifted", a very personal piece of writing that was published in the most recent edition of NorthWord: A Literary Journal of Canada's North.

"Don't cry Mama," whispered Ben encouragingly, sitting with me in the front row, fully aware of the emotional undercurrent that Heather was brilliantly doing her best to contain. 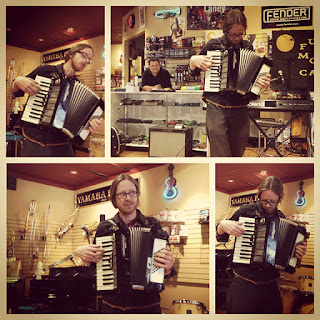 Aaron Godwin, the self-proclaimed accordion-toting hippy dude, lit the place up with an amazing tune before darting off to another engagement.  I want to hear this guy again, because he was simply awesome. 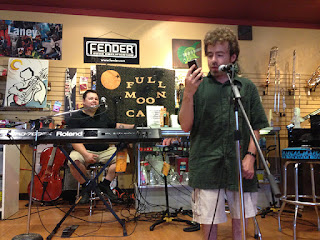 My man Nathan Berube closed out the first set with a couple of stunning poems recited from their resting place on his super-cracked iPhone.  A well-spring of ideas, knowledge, wit and creative spark, Nathan is a renaissance soul, a kindred spirit. 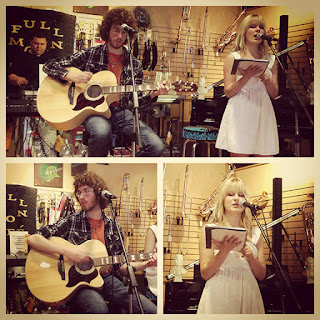 The duo of Reid and Chris (I didn't catch their last names) was really cool to watch.  Talking about their performance as we were heading home, Heather thought they were reminiscent of the musical chemistry conceived by the late Gram Parsons and Emmylou Harris.  She nailed it!  These young folks have so much potential. 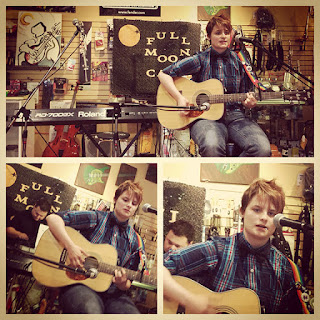 Ariel Reid channeled Tegan and Sara, making her first appearance at the Full Moon Café.  She could have fooled me, as she seems perfectly relaxed and natural in front of a crowd.

"We need to keep the microphone about this far away," said Eric Bureau, indicating a good 18-inches to seasoned sound guy and proprietor of Campbell's Music, Scott Meller. 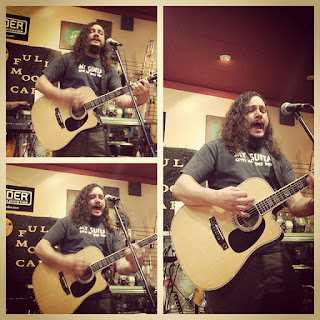 He wasn't kidding!  With a booming voice and amazing presence, he filled the room and had us begging for more. 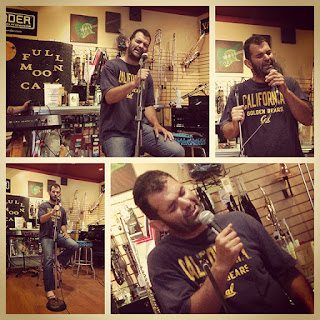 A piano phenom named Kale, a Croatian singer/poet named Mario (above), and an amazing guitarist named Samson Lee (below) rounded out the performers that we enjoyed during our second taste of the Full Moon Café.  There were many surprises, moments of creative brilliance, and a generosity of spirit that is so important when artists share their talents and creations. 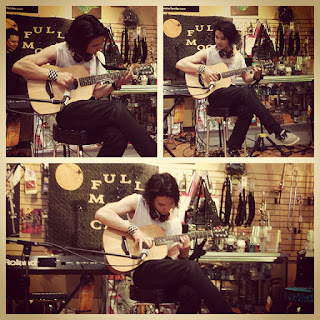 The experience underscores, yet again, the necessity of having this kind of a venue on a regular basis.  It is clear to me that there is a longing for artists, young and old, to share what they are exploring in their basements, garages and back rooms.  They want to come out of the dark and into the light.  We need to find ways, like the Full Moon Café has provided, to allow and encourage this to happen. Whether it is a community arts centre and coffee house, CREATEPLACE, or some other space that become a creative magnet, we need to make it happen.
Email Post