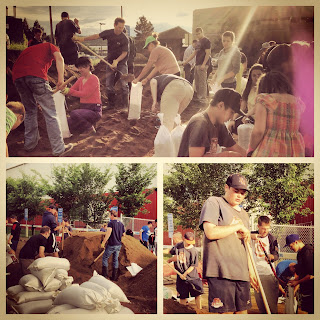 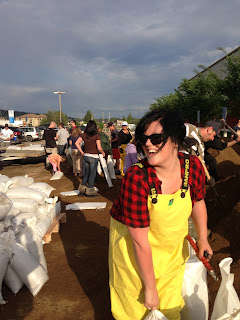 The next three hours demonstrated for me what true citizenship is all about.  A baseball team (Fort McMurray Oil Giants), a college President (Dr. Kevin Nagel), new Canadians, young Canadians, long-time Canadians gravitated to these two massive piles and a sandbag assembly station staged between the Bob Lamb building and the Syncrude Sport & Wellness Centre.  When one group left, another magically appeared. 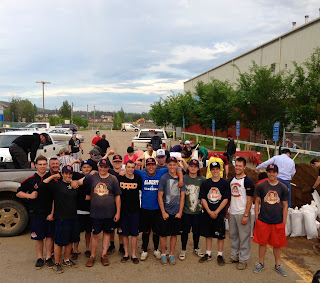 Strangers were helping strangers, talking, smiling, connecting, giving.  It was a beautiful thing to see and be a part of. 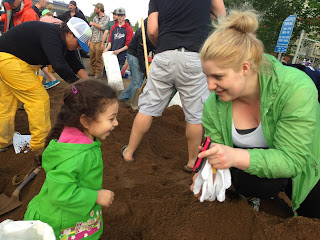 One little girl was determined to help out, diving right into the middle of the cacophony of shovels and sandbags.  We were careful not to run over her or accidentally hit her with our swinging shovels; she was careful to fill up her bag and contribute to this unparalleled effort to protect heritage buildings (Heritage Park), a residential neighborhood (Grayling Terrace) and a vital institution (Keyano College). 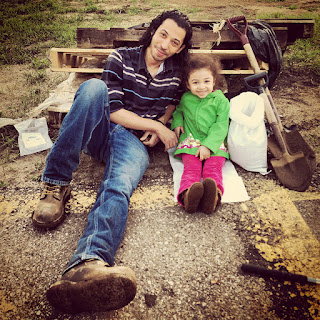 She took a well-deserved break with her dad, and offered up the most amazing smile I've ever seen. 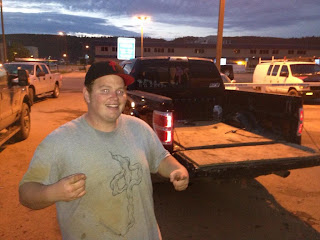 One amazing helper, Lloyd, had put in 17 hours of volunteer service since the flooding began.  He was there when I arrived and he was there when I left, and long into the night.  Your McMurray Magazine publisher Krista Balsom took this picture and tweeted it out around midnight. 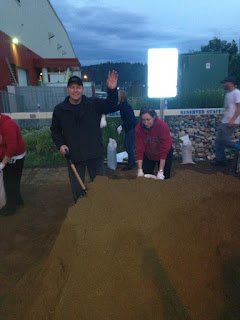 In charge of the institution that took a direct hit from the first wave of the Hangingstone River on Tuesday morning, Kevin Nagel spent hours on sandbagging duty.  You can imagine how much is on his mind as we prepare for a possible 100 mm of additional rain between now and Saturday.

"What happened on Monday night?" I asked.

"I got the call about 2 am," he said.  "The water came up all of a sudden, in about twenty minutes.  There was nothing we could do." 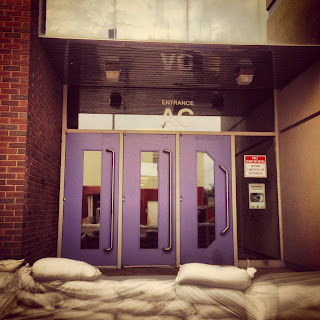 His staff and contractors have been fully engaged in the clean-up effort of the Sport and Wellness Centre since the water receded.  Meanwhile, a wall of sandbags line the back end of the facility in anticipation of another onslaught of water.  Even the back entrances of the Arts Centre have a line of protection, in case the level ends up exceeding the high water mark of Tuesday morning.

So, with the sun shining on Thursday morning after an overnight downpour, we wait, for the forecasted rain and how the Hangingstone and Clearwater Rivers will respond.
Email Post