If I had a dollar for every time I've heard that Fort McMurray is a last minute town, I'd be a very wealthy man.  While one can expect a decent walk-up for a concert, festival or major sporting event -- your box office gold is found in getting out of the gate early, grabbing maximum attention, and generating unstoppable momentum.

I spent seven years as the publicist at Keyano Theatre and many hours gathering stats on buying patterns.   By the fourth year in the role, I could tell you, with a high level of certainty, how an event was going to do based on the opening day of ticket sales.  In my experience, if the product is right, and the marketing hits the target audience, patrons in this community will buy many months ahead of something they want to see, in some cases, years. 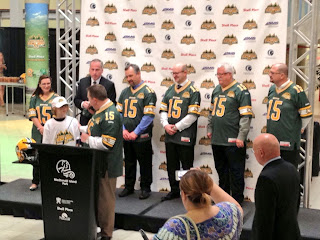 The Edmonton Eskimos, in collaboration with Shell Place at MacDonald Island, sold out their menu of available seat reservations to the Northern Kickoff - 5,222 tickets - in an astounding five hours yesterday.  The game between the Capital City's Esks and the Riders of Saskatchewan is just under two years away, on June 13, 2015.  The product was right (my brother Greg, a Rider devotee, declared that this is one of the single best things the CFL has done in years), the marketing team hit the mark in terms of how they announced the historic clash of the gridiron titans, and both the quality and scarcity attributes of the Northern Kickoff penetrated perfectly.

When we had the entire team at Keyano Theatre running full-tilt-boogie, we would put single tickets for the February musical on sale on the Monday following the closing of the second show of the season in early December.  By the time we broke for Christmas holidays, we'd have over a thousand seats sold, before even a single rehearsal for the show had taken place.  That was back in the days before online sales, and the timing of putting a show on sale had to align with our availability of people to operate the box office and the phones.  There were several times when the volume of calls coming into the Box Office knocked out the whole phone system at the college.

The world has changed dramatically since my days as a publicist.  Online ticket sales, social media and a serious fragmentation of the media landscape have occurred in the last seven years.  It's harder to affordably reach a broader audience than back when two radio stations and one daily newspaper hit almost everyone.  That glass is half empty observation can be countered by a half full fact that we now have free and unfettered access to a viral potentiality that is more authentic, penetrating and sticky than anything we had before.  In other words, let your customers do the work for you.  They are amazingly adept at spreading information that matters. 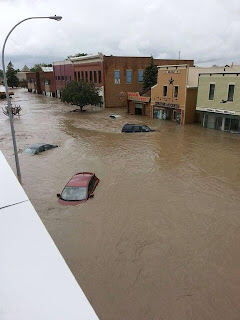 If you observed what happened during the recent floods in southern Alberta, among hundreds, probably thousands, of pictures and video clips, a couple emerged as the money shots that went viral.  There was the comparison photos of Cougar Creek in Canmore, the picture of the flooded main street of High River, and the low-light shot of the river water up to Row 10 in the Saddledome that traveled around the province, country and globe. It wasn't a concert, festival or sporting event, but it was information that mattered, and ordinary Albertans did the lion's share of the work in keeping each other informed as the crisis unfolded.

A key question for event organizers would be this: Are you giving your customers what they need so they can do the work for you?

Is the information memorable?  Is it sticky?  Is the graphical collateral picking up eyes?  Is the call to action clear?  Is the scarcity factor easy to understand and compelling?

I was recently asked to consult on a major event coming to town, and how they might come out of the gates with maximum impact.  Here are a few of the ideas I shared.

1. Start with the end in mind

If you do everything right with the event announcement, what is the headline on the front cover of the paper the following day?  What is the image? 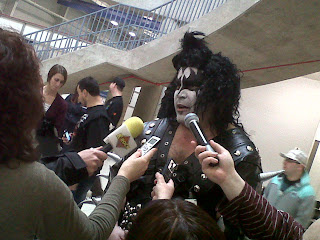 Claude Giroux and the Events Wood Buffalo/MacDonald Island partnership gets the prize for this one with their unveiling of the KISS concert a couple of years ago.  The news was big all by itself, but the fact that it was shared by a 7-foot tall Giroux dressed as Gene Simmons, almost guaranteed unparalleled coverage in the local papers.

2. Announcement as the trigger

To create maximum forward momentum, all the collateral pieces need to be ready and distributed the moment after the news is announced.  The first radio commercial break following the announcement should include your sizzling promo, on every radio station if your budget allows.  The poster and images supporting the event need to be all over social media: Twitter, Facebook and Instagram.  The teaser to the news that you created leading up to the announcement has to be eclipsed by the wave of awareness and excitement generated by the details.  The news release needs to be in the hands of all the media, and accessible to everyone else (probably on your website) so they can share it, too.

3. On sale date and time

Putting an event on sale on a particular date and time helps the customers compartmentalize the information, and put the call to action on their priority list.  I'm a big fan of a four or five day lag time between the announcement and the on sale date.  This allows for momentum and excitement to crest just when you need it to.

Is there a compelling reason for your target audience to respond when the tickets are put on sale?  If there isn't, give them one.  Whether it is a limited release of tickets, a time-senstive offer, or the perception (not necessarily the reality) that it is going to sell out, no questions asked (Keyano Gala), communicating scarcity is your best friend.

Will the average customer be able to find the information that they are looking for with respect to your event?  They will intuitively go to a number of different places to look at the details; you need to make sure that your website, Facebook page, Twitter feed and every other repository of info has what they are looking for.  Grab some random person, sit them down at a computer, ask them to look for information on your show, and see what they do and what they find, or don't find.

I have always used a three phase approach to marketing special events:

Whether it has been a major concert, theatrical musical, or a signature classical music event, this approach has produced great results.

I like to think of the last minute buyers as the gravy on the fluffy potatoes.  They represent the extra rush of revenue that provides a pleasant finish to the event experience.  They are a fickle bunch, these last minute purchasers.  They are easily distracted and dissuaded, and because of those two decidedly unpredictable qualities, they cannot be trusted, nor relied upon.  Lord help you if you're doing an outdoor event and the weather turns bad, as those folks who didn't pre-purchase are staying home, or doing something else.

I've been in the special events business, at one level or another, for the better part of 20 years.  I appreciate when things go according to plan, but learn lots when they don't.  And just when I think I have it all figured out, an event that should be a slam dunk falls on its face, or one that should have been a tough sell blows up beyond our wildest imaginations.  It's a fascinating business.
Email Post