How would the world change if Facebook just stopped working?  As a subject for a parody movie, I think it would be excellent, and might teach us a lesson or two about how we have become addicted to this social media platform.

We got a small taste of it this morning as posting and liking for many of us around the world - I had someone in Argentina confirm on Twitter that they were having the same problem - generated a "Please Try Again Later" error message.  I'm not sure if this has impacted everyone as the odd new post seems to be coming through.  But I literally cannot participate in the conversation at the moment.  I'm starting to twitch.

I've often said that the network I've grown on Facebook is so valuable to me, personally and professionally, that I would happily pay to ensure it continues.  I can think of many key contacts that I only connect with via Facebook or other social media sites.  It's at the point where I don't even need to think about it: Steve is on Facebook, Dustin is on Twitter, and Daniel is on LinkedIn.

This global glitch begs the question: What we would do if those connections were all of a sudden lost?  It inspires an exercise to strengthen those connections that really matter, whether that be getting them into your contacts database, connecting on LinkedIn, or following on Twitter.  As a professional practice, I've often talked about the need to make additional connections where appropriate.  Today's problems on Facebook reinforces the notion. 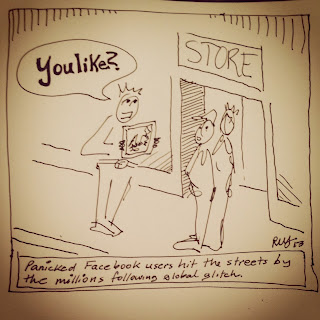 @I_Love_Italy posted a humorous tweet this morning that inspired both this blog post and the cartoon I sketched out:  Facebook down. Panic in the streets, people go around with their photos asking "You like?".

If there are any Hollywood producers reading this thinking of the cash flow potential of a full-length feature around this theme, perhaps starring Will Ferrell, he/she or it (@I_Love_Italy) should get all the credit.
Email Post