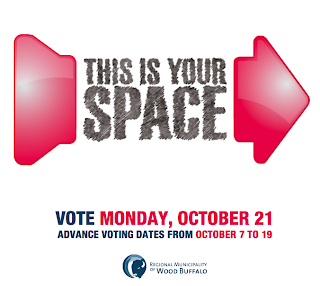 The first week of the 4-week long election campaign was mostly about signs.  All the various teams scrambled about the region finding prime (hopefully legal) spots to put their images and messages.  Some were large, as large as the bylaw would allow, while others were smaller, adhering to the minimum area requirement.  Councillor Phil Meagher came out with a brand new line of handcrafted signs, taking his round theme to a whole other level creating inuksuk-shaped beauties.

As always is the case, keeping the signs up and presentable is an issue.  Driving around town you see some of them bending to the wind, others completely uprooted and lying on their sides.  It's a lot of work for the candidates and their teams, especially in the first week, getting a feel for the best installation method.

While the new bylaw has been a pain for some of us, in terms of maximum height requirement - I had to cut all mine by 1.5 feet at the last minute - it has reduced the sign clutter.  The smaller lawn signs, which peppered the highways and byways in 2010 and in the byelection that occurred in 2012, are now relegated to private property.

Most of the signs in place, the focus shifts to campaigning, attending events, and answering questions on The Talking Stick.  Located at www.mycommunitymyvoice.com, a website developed by the Fort McMurray Chamber of Commerce, this is a place where you can ask a question and get an answer by all the candidates.  We hope you take advantage of this tremendous tool.  Thanks to Diane at the chamber, each of us has a little reminder that pops up at the end of the day encouraging us to check in to see if new questions have been asked.

I just finished answering a question about whether or not I am in conflict position being on council will serving as the interim executive director of Arts Council Wood Buffalo.  I'm glad the question came up, as it is a fair question.

The chamber is also organizing an event this weekend called Grill 'n Government - a chance for residents and voters to connect face-to-face with all candidates in a casual environment.  If you're a person who doesn't end up at public events and in public spaces where you naturally run into candidates, this is a great opportunity.  Spending five minutes talking to a candidate will tell you more than hours of gleaning through platform material and press clippings. The event is happening at the Father Merc High School Cafeteria on Saturday from 11 am to 2 pm.  Open networking will happen until 1:30 pm and which time there will be a short question and answer session.  Unfortunately, I will be unable to attend as I had previously committed to a community capacity building conference in Calgary, an event that was post-poned due to the southern Alberta floods in June.  This is one of those instances when I wish I could be in two places at once.

I mentioned press clippings a little earlier on.  If you have the time, they can be a great source of information.  I have been collecting and sharing the print stories about all the folks running in this election on my campaign Facebook page.  There are several different albums there that might be of interest including "2013 Candidate Announcements", "Campaign Issues" and "Platform Press". Thanks to both the Fort McMurray Today and Connect Weekly for covering this election in such detail.  This is your chance to see all the coverage in one place and see everyone's opinions and ideas.

I certainly hope you take the time to attend the Mayoralty Forum on Tuesday, October 8th, from 7:30 pm to 9:30 pm at the Suncor Energy Centre for the Performing Arts.  You'll get to see Melissa Blake, Jim Rogers and Gene Ouellette go toe-to-toe.

Finally, I have to say how much I appreciate the extra attention and effort that has been made to increase voter participation through the marketing and awareness campaign that is all over town - on busses, bus shelters, in print and online.  "This is YOUR space" is all about the incredible power each citizen yields in that space you get to fill in on the ballot. In recent years, we have experienced a dramatic decline in the voter participation percentage.  We have a shared responsibility over the next three weeks, less a day, to encourage friends, neighbours, co-workers and community colleagues to get out to the polls.
Email Post